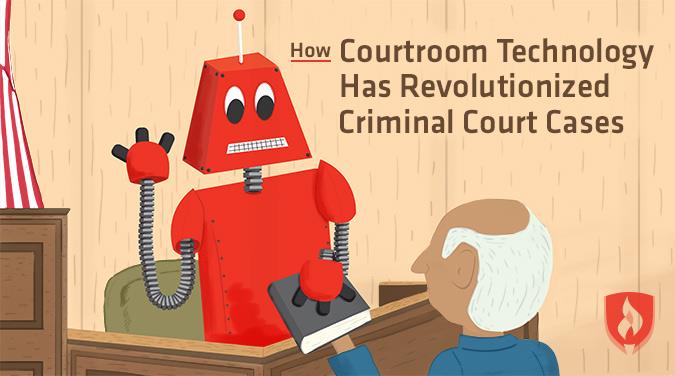 When you think about technology in the courtroom–particularly as it relates to criminal cases–the images that likely come to mind include many of the high-tech tests and presentations you see on TV shows like CSI or Law and Order.

But in reality, courtrooms have long lagged behind the assumed norm when it comes to modern technology. The judicial system has traditionally been hesitant to embrace new ideas, and in an age of constantly evolving technological advances, this can be a huge detriment to criminal court cases.

Thanks to popular culture’s recent true crime obsession, along with the longstanding interest in crime and investigation-related TV shows, we’re all pretty familiar–at least at a high level–with the technology used in collecting evidence. We know about DNA testing, fingerprint analysis, luminol tests for blood evidence, surveillance footage, cell tower data and even the not-so-reliable use of polygraph tests.

But the increasingly interesting side of evidence-gathering technology in criminal cases is the unknown capabilities of a digital age that’s evolving so rapidly.

For example, scientists and tech experts have been working to develop biometric techniques that could stretch much further than fingerprint technology. This could show up in the form of facial and iris recognition–the use of 3D-image-processing algorithms to technologically recognize like features in a suspect’s face or eyes. You can imagine its effectiveness in comparing surveillance footage of someone committing a crime to a photograph of a suspect identified by law enforcement.

Another mind-blowing technological advancement we may see come to fruition in criminal cases is brain imaging. This technique uses functional magnetic resonance imaging (fMRI) to scan an individual’s brain and detect changes in blood flow that indicate which areas of the brain are active. Scientists assert that this is a promising technique for determining a suspect’s guilt, as it can detect when a person is lying with 70 to 90 percent accuracy.

Some have argued that in cases in which accuracy may fall closer to 70 percent, the science may be too unreliable to stand up in a court of law. Others argue that brain scans may still be an improvement over the widely accepted use of witness testimony, which has been proven to be extremely fallible.

While these are just two examples of what may be on the horizon for the use of advanced technology in criminal cases, it is clear that our capabilities are evolving rapidly. So what does it mean for the courtroom when scientific developments are rushing in so swiftly that our justice system is struggling to keep up with the expert testimony they can produce?

Technology in criminal cases: Presenting evidence in the courtroom

There are several tried-and-true evidence presentation techniques that lawyers have used for decades: writing information on a whiteboard or easel, handing printed documents or photographs directly to the jurors, reading original testimony straight from a transcript, presenting important documents or images by mounting them on a foam core board . . . the list goes on.

While those techniques have proven to be effective in their own right, they’re becoming increasingly antiquated as a new generation of jurors rushes in–a generation accustomed to the latest and greatest technology our modern world has to offer. Many of today’s jurors find the presentation of evidence more effective when technology is used.

Enter the electronic courtroom, also known as the e-courtroom. While there is no set standard and all courtrooms will differ, many are adopting an array of new technology. This includes the use of interactive flat screen displays, webcasted testimony, use of dual screens that present several documents to the jury at once and even personal screens for each juror in the jury box.

Some lawyers and judges may still be hesitant about using so much new technology. Others praise the efficiency it offers in easily presenting a multitude of evidence while also accommodating the evolving nature of high-tech expert testimony. But arguably even more important is how juries are reacting to the increased use of technology in the courtroom.

One Superior Court judge, when tasked with uncovering an answer to that very question, discovered some compelling results. After surveying jurors over several months of complex criminal trials, the judge found that anywhere from 72 to 100 percent of jurors reacted positively to the incorporation of new technology–the lower figure pertaining exclusively to whether attorneys knew how to properly operate the advanced equipment.

Technology in the courtroom: The bottom line

This isn’t the first time we’ve entered into discussion about the relationship between technology and the law, and it will definitely not be the last. For example, consider the recent–and very public–standoff between Apple and the FBI.

With all the data on the effectiveness of technology in the presentation of evidence, as well as the seemingly limitless possibilities when it comes to collecting that evidence, it is clear that courtroom technology will continue seeing greater improvements on the horizon.

If you’re intrigued by the inner workings of our courtrooms yet mystified about what goes on behind the closed doors, you’re not alone. Many go a majority of their lives without ever seeing the inside of a courtroom!

That’s why we created an illustrated infographic to help you learn more about who’s who in the courtroom – you may even spot your future career! Check it out here: Order in the Court! A Visual Guide to Courthouse Jobs [Infographic]