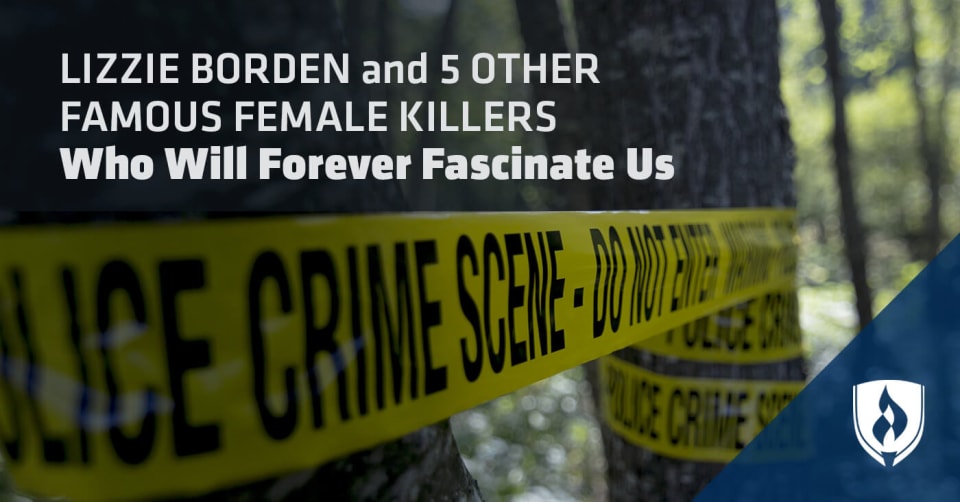 They’re our sisters, our mothers, our daughters, our friends. And whether we like to realize it or not, they can be cold-blooded killers, too.

After all, crime knows no boundaries. But when women — who are so often depicted as kind, gentle, maternal figures — commit heinous crimes, the dichotomy can be downright baffling and, as the media would tell you, often irresistible.

What is it about female killers that continues to fascinate us? From some of the most notorious and well-researched cases to some confounding contemporary crimes currently dominating today’s media circus, there’s no denying the particularly chilling nature of female killers. Here are six of their unforgettable stories.

When she saw what she had done

She gave her father forty-one.”

The Lizzie Borden case grew from sensationalized proportions in the 1890s to full-fledged urban legend in more recent history. Perhaps one of America’s most famous female killers, Borden is notorious for allegedly bludgeoning her father and stepmother to death with a hatchet.

Borden’s distaste for her stepmother was commonly known, and — aside from the maid — she was the only person who was home on the afternoon of the killings. She quickly fell under a heavy curtain of suspicion — especially after she burned the dress she wore the day of the murders and provided inconsistent testimonies. Despite the scrutiny she faced, Lizzie’s jury only deliberated for ten minutes before finding her not guilty. The crime was never solved.

Sometimes referred to (though not entirely accurately) as America’s first female serial killer, Aileen Wuornos admitted to killing seven men in central Florida in the early 1990s. She came from a troubled home; her father was imprisoned for child molestation, her mother abandoned her at a young age and she was raised by abusive grandparents. She gave birth at age 14, and was promptly kicked out of the house.

In the years that followed, Wuronos lived a vagabond lifestyle, making her living as a sex worker. She eventually ended up in Florida where she had a string of run-ins with the law before her fingerprints were discovered in the crashed vehicle of one of her victims.

Wuronos met her victims while hitchhiking and claimed each killing was committed in self-defense. She was prosecuted for killing six men; the seventh was never found. Wuronos was put to death in 2002 and served as the inspiration for the 2003’s Monster.

Sometimes known as the Giggling Granny for her jovial disposition while under suspicion for killing off much of her family, Nannie Doss allegedly left as many as 12 deceased in her wake.

Doss was first married at age 16 and had four children. Her killing spree began when two of the four children suddenly died. Food poisoning was the supposed culprit, but Doss’ first husband wasn’t convinced. He soon left her.

She went on to marry four more times. None of the four succeeding husbands survived, and Doss happily cashed in on their insurance policies. But the killings didn’t end there. She also was suspected of killing her own grandbaby, one of her nephews, two of her sisters, her mother-in-law and even her own mother. Her method of choice? Arsenic.

Doctors finally caught on when they conducted an autopsy on Doss’ fifth husband and found enough arsenic in his system to kill twenty men. She pled guilty and was convicted of murdering her fifth husband. Although there were alleged jailhouse confessions of the other deaths, the Giggling Granny was never officially charged with the other murders.

Foster parents are often admired for their kind hearts and open homes — especially when the youngest and most vulnerable are in their care. But that wasn’t the case with Amelia Dyer, also known as The Reading Baby Farmer.

For a lump sum payment, Dyer welcomed infants into her home until a permanent home could be found. She “farmed” babies throughout the latter half of the 1800s, ensuring concerned parents that their illegitimate children would be cared for and find promising futures. In reality, however, Dyer would pocket the fee and murder the babies instead.

She was finally brought to justice when tiny corpses were found floating down the River Thames, wrapped in parcel paper stamped with her address.

Dyer’s defense team tried to prove that she was not guilty by way of insanity, but after a five-minute deliberation period, the jury found her guilty and sentenced her to death. She was hanged later that year, and although she was only formally charged with the death of one child, she is believed to have killed nearly 300 babies in total.

Self-proclaimed psychic from Chicago, Tillie Klimek, believed she had a gift — when visions of death appeared in her head, funerals followed soon after. However, not everyone was so convinced.

Unlike most killers, Klimek’s mayhem started late in life. When her husband of 29 years passed away suddenly, she confided in a friend that she had predicted it in a dream weeks before the death. She collected her insurance payment and was married again within two months.

Another dream and another funeral followed suit. Klimek married a third time, but this marriage only lasted six months before her prophetic dreams started up again. The third husband died, as predicted, but not until Klimek made herself the sole beneficiary on his life insurance policy.

Within a year, she married for a fourth time. By now, her reputation was starting to emerge in the neighborhood. Passerby avoided her in public for fear of hearing their own death predictions. With that, Klimek grew bolder: When she dreamed of an impending death, she even told her husband. He laughed it off, but he died soon after.

A string of husbands weren’t the only deaths alleged at Klimek’s hand. After a dispute with one family on her block, she apparently had a vision of a plague hitting the family. Soon, three of the family’s young children passed away.

She wasn’t brought to justice until her fifth and final husband fell ill. When his stomach was pumped, medical professionals discovered arsenic — Tillie’s poison of choice — sprinkled in his food. Tillie was later prosecuted for the death of her third husband and sentenced to life in prison, with one stipulation: She wasn’t allowed to cook for the other prisoners.

The bond between mother and child transcends time and culture, as it is universally understood as the core of the human experience. Few things horrify and fascinate us as much as when that bond is broken. Such is the case with Casey Anthony, who fell under a cloud of suspicion during the murder investigation of her daughter Caylee. The case befuddled the public with many unbelievable twists, and at the heart of it all was one resounding tragedy: The loss of an innocent two-year-old girl.

Anthony was a typical young mother when everything suddenly went wrong. Her daughter Caylee mysteriously went missing in June 2008, but police weren’t called until an entire month had passed — and even then, it was only at the insistence of Anthony’s panicking mother. Where was Caylee, and why had nothing been done about her disappearance for an entire month?

Anthony strung investigators along with lie after lie, from fabricating a nanny who had supposedly kidnapped Caylee to falsely claiming to work at Universal Studios. The evidence piling up against her didn’t look good. Chloroform was found in the trunk of her car, as was the rancid smell of a decomposing body. Incriminating internet searches and Anthony’s baffling behavior after her daughter’s death caused a media uproar. Sadly, Caylee’s body was discovered months later with duct tape suspiciously placed over her mouth and nose.

The trial was an utter media sensation. After an 11-hour deliberation, the jury felt they were unable to declare Anthony guilty beyond a reasonable doubt. Public outrage ensued as Casey walked free, and a majority of the public still has her cemented as a murderer in their minds. To the public’s knowledge, no further investigation has been pursued regarding this case.

Sometimes the truth really is stranger than fiction. As you can see, from Lizzie Borden’s sensationalized case to recent high-publicity cases like Casey Anthony’s, female killers have and always will fascinate us. We may never understand why people commit such horrible crimes, but that can’t stop us from wondering.

But why stop there? You might as well put your investigative abilities to the test by examining a few of the dozens upon dozens of cold cases that continue to evade authorities. Start with some of the most baffling cold cases in our article: 6 Unbelievable Unsolved Crimes to Intrigue Your Inner Investigator.