How to Become a Police Detective: Your 6-Step Guide 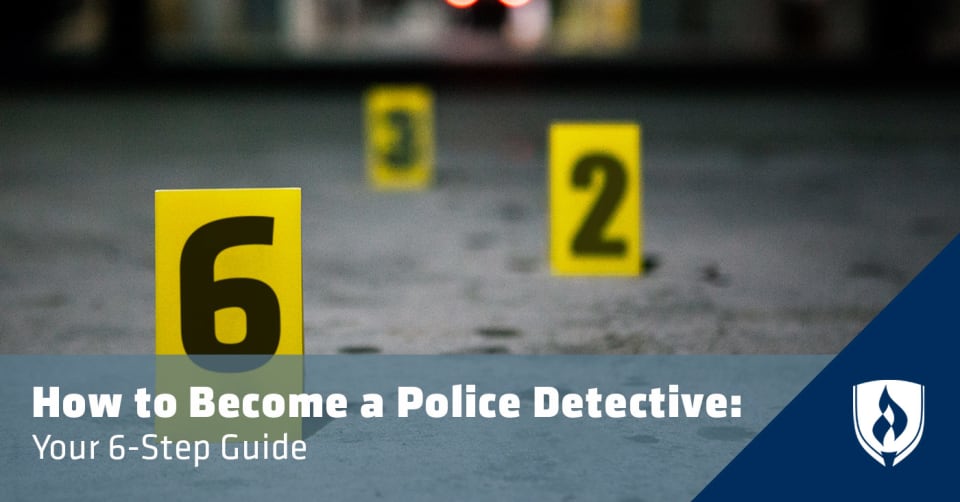 Police detectives might make their job look easy, but there’s more to it than the dusting for prints and intense interrogations of suspects found in crime dramas. Working in law enforcement can mean long hours and unsafe working conditions, but it also means helping people in need and bringing criminals to justice.

If detective work is what you’re drawn to, you’re likely wondering what exactly what you need to do to make your dream a reality. The first thing to know is that becoming a police detective starts with becoming a police officer. But if you want to take that next step in your career—or you’re just curious about becoming a detective—here’s where to begin.

First, let’s get some of the basics squared away and explain how a police detective differs from a police officer. It’s true that some duties and skills may overlap between the two roles, but they are different positions that require different levels of experience and expertise.

Let’s use a random homicide as an example. Police patrol officers are the men and women called first to the scene of the crime. They assess the overall situation, gather evidence, protect the scene from contamination and work to identify victims, witnesses and potential suspects. In short, the work done by the officers lays the groundwork for a successful investigation, says Eileen Carlin, a 20-year law enforcement veteran and current state program coordinator for the Rasmussen College School of Justice Studies.

Police detectives are then called to the scene. They collect and evaluate evidence, interview witnesses, identify and question potential suspects, obtain arrest warrants and close cases. Essentially, detectives move a step beyond just getting a crime scene under control and identifying the basic facts of the situation. They need strong reasoning, personal communication and investigative skills to build strong cases against the people they eventually charge with a crime.

How to become a police detective

As you’ll find out in your job search, every police department does things a little differently due to size, jurisdiction and regulatory environment. There’s really no one-size-fits-all when it comes to becoming a police detective, but these steps are the ones you’ll most likely encounter.

While education requirements vary for police officers depending on their role, Carlin says most departments want detectives to have at least some college education.

In addition to a hefty list of crucial skills, law enforcement officials need to know an extensive list of rules and regulations to do their jobs correctly and safely. That’s probably not a surprise. But did you know that written communication skills are every bit as important?

While plugging away at a keyboard probably isn’t the most exciting part of an officer’s job, would-be detectives need to remember that reports written by police detectives are essential to cases and used by higher-level officials, attorneys and judges—so accuracy and an ability to clearly communicate what happened is paramount. Carlin says developing these writing skills is a big part of why departments seek college-educated detectives.

This is no small step—becoming a police officer means you’ll need to meet several requirements for employment, such as being at least 21 years old, having a driver’s license and being physically fit, according to the Bureau of Labor Statistics.* Many states will require that you complete some form of police training academy.

As a police officer, you’ll often work closely with police detectives, and if you want to be one of them, it’s wise to pay attention to what they do, Carlin says. Often, experience teaches detectives how to tactfully deliver bad news, communicate with firmness and sensitivity in tragic-but-timely investigations and read body language to successfully interrogate suspects.

Police officers are trained to perform all of the above skills, but police detectives have the benefit of years of experience to master them. Pay close attention to the way they operate when the opportunity presents itself.

Training doesn’t stop once you become a police officer. There will always be new skills, techniques, policies and regulations you’ll need to know. That’s especially true if you have dreams of moving your career forward.

According to Carlin, there are two skills that are absolutely crucial to good detective work: interviewing and interrogation. They both have to do with gathering information, but there’s a big difference between them. The former requires great people skills to get information from those who are not suspects in a crime; the latter requires expert negotiation skills and a grasp of human psychology to get information from those who are.

They’re both tricky because they require getting people to tell you information they can’t remember, don’t think is relevant or don’t want to tell you—and you have to know how to obtain the information legally. Information that has been coerced from suspects is useless because it will be thrown out in court, Carlin says.

You’ll learn all about interviewing and interrogating people in school and on the job, but taking classes through your department shows initiative that others will recognize when the need for a new detectives arises. Carlin says such classes usually last about a week and you earn a certificate upon completion.

Becoming a detective means trying to gain a promotion when you are working as a police officer. It’s important to look around your department and consider what will make you most eligible for the job.

After you’ve completed all the other steps, you’ll naturally want to dive into a career as a police detective. Sure, you know you need to be a police officer first, but only for a few years, right? Well, it depends on the department and its specific needs.

Carlin says she’s seen officers become detectives in just three years, while others have taken as long as nine years. It all comes down to how many detectives the department needs—urban areas with large police departments often require more detectives than rural areas, but the promotion cycle in bigger cities tends to be more competitive because of the number of candidates. If you’re looking to move up as quickly as possible, Carlin advises to take as many detective-related training classes as you can and choose your job location wisely.

“If your goal is to one day be a detective, then you should focus on looking for a job in a large department,” Carlin says. “It will be easier to move into the role of detective because they’ll need more detectives, and you’ll be busier.”

Ready to start working your way to a police detective badge

Your dream police detective career won’t happen overnight, but you likely didn’t expect it to. Detectives do some seriously crucial work in society. They need to be well trained and good at solving crimes. Now that you know how to become a police detective, you’re a little closer to cracking some of those cases yourself!

You know what’ll be expected of you, you understand you’ll need extra training and you’re ready to wait until a department needs your skills as a detective. If you’re ready to tackle the first step toward becoming a police detective–education, then learn more about Rasmussen College’s Criminal Justice degree programs and how they can help make you a more well-rounded candidate for law enforcement positions.

*Bureau of Labor Statistics, U.S. Department of Labor, Occupational Outlook Handbook, [career information accessed August 7, 2018].
EDITOR’S NOTE: This article was originally published in 2015. It has since been updated. Insights from Carlin remain from the original article. 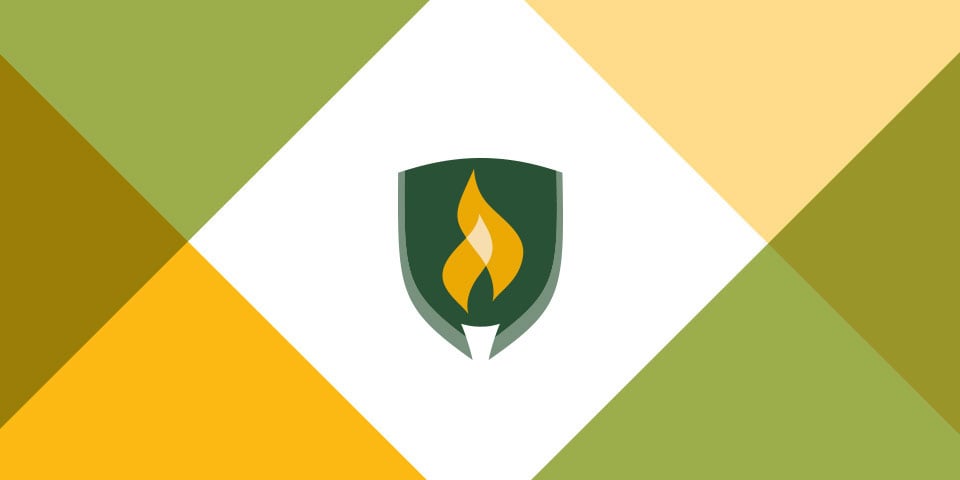 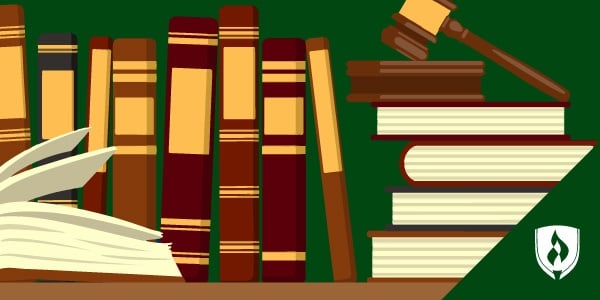 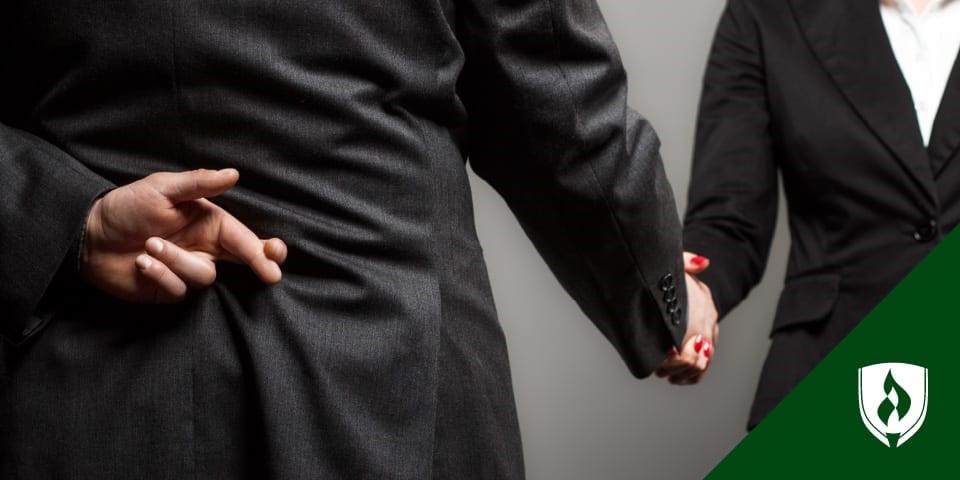 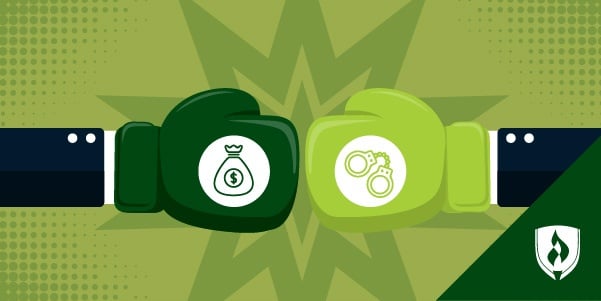