Cornell Bunting’s story is like few others—a man who moved to America from Jamaica, became a father and had his heart stop, only to then pursue a degree in Marketing and double down on his passions. Few individuals have had a life-altering, near-death experience like Bunting, but many can relate to his unwavering love for his children, his aspiration to better his life and his drive to pursue his education.

Bunting had the opportunity to move from Jamaica to the United States at age 21 because of his exemplary work in the hospitality industry. He had won several awards in his field and was given the chance to transfer to a resort in Captiva Island, Florida. After spending time in the sunshine state, in 2004, Bunting left Florida and the hospitality industry behind and moved to New York. While living in New York he married his then wife and had three boys 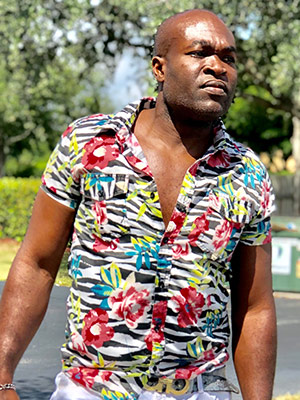 However, life’s unforeseen circumstances brought him back to Florida and the hospitality industry, which he thought he left behind. Then, after a failed business venture, Bunting began looking into pursuing his education. He looked for programs in video gaming and simulation programming, which were true areas of passion for him. “There were a few colleges in my area and I was college shopping to see what would best fit me. I saw testimonials about Rasmussen and looked into the (then) program and I saw that Rasmussen would be the best fit for me with my boys,” explains Bunting. He wanted to put energy in building a better career for himself and thus a better life for his family.

Tragically, in June of 2016 Bunting’s life as he knew it would be forever changed. “For 16 minutes I died. My heart stopped and I was dead,” Bunting states.

Bunting went into cardiac arrest and was rushed to the hospital. His heart stopped for 16 minutes before they were able to resuscitate him. The doctors then placed a defibrillator in his chest to prevent future attacks.

Bunting had felt tested before, but this quickly became one of the most difficult periods in his life. He was forced to drop out of his program at Rasmussen and was also unable to work. Struggling with the limitations of his health during the recovery, he turned to writing. He wrote two books and began working with a publishing house.

In 2017, Bunting’s health was improving, his books were on the trajectory of being published and he knew that he needed to continue working towards his goal of obtaining a college degree. This is when Bunting chose to reach back out to Rasmussen College. He knew that education would benefit his family and career. Although he learned that his previous degree program was no longer offered, his advisor presented Bunting with several different options he could pursue at Rasmussen to help him reach his career goals.

Due to his positive previous experience at Rasmussen, Bunting decided to pursue the fully online Marketing Bachelor’s degree program. “I am a dad to my three boys every single day, and I am also working,” Bunting explains. “Being able to do school at my own pace within the week is so helpful.”

While a new experience, Bunting doesn’t feel as though he is missing out in a fully-online education. He explains how Rasmussen provides valuable opportunities to all of its students, such as the virtual career fair he attended recently. He also stops by the New Port Richey/West Pasco campus every now and then to talk with his instructors in person.

Bunting feels his life is finally changing for the better. In 2018, his two books were published, first a compilation of poems called Bunt Walk and a children’s book called Peedie likes the Drip Drops: Understand the Drip. His books did well and he was able to travel to Europe to host a book signing. Then in 2019, he published his third book Lion With No Roar: Finding His Calling.

Looking to 2020, Bunting wants to launch a brand name around his work as an author and a public speaker. He would also like to incorporate his interest and knowledge in video gaming and turn his books into animated simulations. Bunting explains that these aspirations seem more attainable with the marketing knowledge he is gaining from his program. “They (instructors) are helping in a big way,” Bunting explains. “Even just the information I have already acquired has made a difference for me.”

It’s clear that Cornell Bunting is working to make an impact on his professional goals and on his sons. If you know someone who could use a boost to help their dreams come true, visit the Change a Life Scholarship page to nominate them for a scholarship.