Courtney O’Connell knew the direction she wanted her life to go from a young age, and each phase of her life has helped her chip away at that goal.

“I always wanted to be a nurse,” O’Connell states. “I love taking care of people. 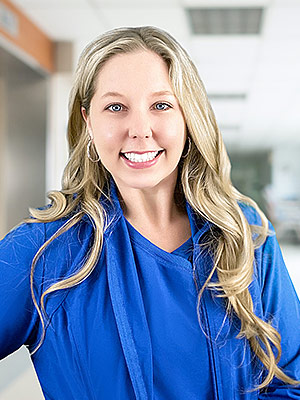 First, in high school, she started working as a dietary aid. Then O’Connell became a nursing assistant in a nursing home before becoming a licensed practical nurse (LPN). Knowing she wanted to become a registered nurse (RN) one day, O’Connell began her education at Rasmussen College where she later graduated from the Professional Nursing Associate’s degree (ADN) program.

O’Connell reflects on the preparedness her Rasmussen College undergraduate education afforded her. Not only was she prepared to take her NCLEX-RN certification exam after graduation, but also knew how to work safely and effectively with patients. Her Associate’s degree ultimately set up to continue her education and achieve more of her goals.

On her initial visit to the New Port Richey/West Pasco campus, O’Connell met with an advisor who laid out all the courses she’d need to take to complete the Professional Nursing program. “It made becoming an RN an easier goal for me. It made my goal feel more tangible to reach,” O’Connell reflects. “It’s something I love about Rasmussen, being able to see on paper what I needed to do to become a RN.”

Her advisor continued to check in with her while she progressed through her program. O’Connell expresses that it wasn’t just her advisor who was invested in her education, it was so many different individuals at the College.

O’Connell recalls a story of when she and a classmate were studying on campus when their instructor happened to walk by. The instructor asked how they were doing and they mentioned they were having difficulty grasping one of the concepts from class. The instructor then sat with them to walk through the concept and didn’t leave until they both understood.

“It’s pretty great for a teacher to take some of their personal time to help us make sure we are succeeding and that we are going to do well,” O’Connell says.

Leading up to graduation, people in her life cautioned O’Connell that it may take several months after graduating to land a job in a hospital. However, that was not the case. She quickly found a job as a nurse at a local hospital after graduating. She credits her experience as an LPN and her time at Rasmussen College for why she was able to find a job right away.

Soon after graduating with her Associate’s degree, O’Connell chose to continue her education in a family nurse practitioner Master’s degree program. She feels her time at Rasmussen prepared her to be successful as she has continued her education. “Rasmussen’s teaching methods definitely lay a foundation to help a student become a successful nurse and also be able to build on those blocks for future nursing education,” O’Connell states.

After lots of hard work, in October 2019, O’Connell completed her Master’s program. In the future, O’Connell hopes to work at a family practice, where she can provide continual care for her patients. She also has a goal to teach as an adjunct instructor for a nursing program one day. O’Connell explains that she has had amazing educators who have made an impact on her pursuit to becoming a nurse, and in turn, she would like to make that impact on future students pursuing their education.