In the Spring of 2016, David Mendelson-Curry’s life had never been better. After years of working with a financial company, he was finally going to school to pursue a degree in a field he was passionate about—an Associate’s degree in Human Resources. “In studying HR and organizational training and development, I gained the ability to effect change in people and the way they do business. I am able to teach leaders how to believe in their own people,” he says. The field fed his desire to help others and make a difference in their lives. Due to a corporate partnership between Rasmussen College and his employer, Mendelson-Curry found Rasmussen College to be the best option for him.

Mendelson-Curry was enjoying his time at the Tampa/Brandon campus and had been working hard to make it on the dean’s list quarter after quarter. “Being on the dean’s list acknowledged I was doing a great job and really pushed me forward and motivated me,” he says. Wanting to celebrate his success, he and his husband, along with their friends, wanted to visit one of their favorite places on earth—Disney World. Little did he know, going to Disney World would potentially save his life. 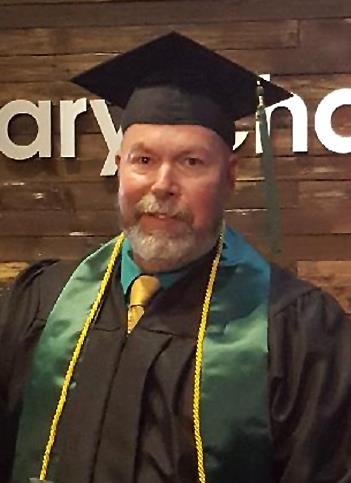 As the group walked around the park, a place that normally energized Mendelson-Curry, he felt sluggish and thought he might be getting the flu. Instead of getting better as time progressed, he only seemed to get worse. After days, he could not stop coughing and knew something was off. What he thought must have been pneumonia quickly escalated into something even more serious and prompted him to go to the hospital.

Suddenly everything in his life seemed to come to a halt. “As soon as a cardiologist walked into my hospital room, I knew something was wrong. It was heart failure. My heart was slowly failing,” says Mendelson-Curry. He had a terminal illness.

Cooped up in his hospital room, scared and confused, he was unable to work at his job, but he knew he wanted to continue to do his school work. “School kept me motivated; it kept my mind occupied while everything else seemed to spin around me,” he says. With graduation so close, Mendelson-Curry just wanted to make it to the finish line.

A few months after he seemed to come to terms with the initial diagnosis, he took a turn for the worse. This time he was rushed into emergency cardiac surgery followed by a long stint in intensive care. While in the ICU, Mendelson-Curry’s laptop was glued to his side. He badly wanted to complete his homework and stay on track.

It finally got to a point where Mendelson-Curry could no longer continue on with his schoolwork. “I finally called the campus and spoke to the dean. I didn’t want to give up completely. I just wanted this to be an ‘on-hold’ thing,” he says. That day, he withdrew from his classes but was determined to get back to them again someday.

Just when Mendelson-Curry thought he had made it through the biggest hurdles, his condition changed again. As he was rushed into another open-heart surgery, he remembered thinking that he was going to die. During the surgery, the doctors had to give him a Left Ventricular Assistance Device, which is an articfial heart as well as a defibrillator and pacemaker. His condition had gotten so dire that he was put on the heart transplant list and sent back home.

While the surgery did not fix everything, since he still needed the transplant, the artificial heart, defibrillator and pacemaker did make daily tasks easier. When he felt up to it, he decided to go back to Disney World. He enjoyed walking around the park, working to regain his strength. Finally, by the time Fall rolled around, Mendelson-Curry felt strong enough to go back to school. With the support of his instructors and the ability to work on his courses at his own pace between appointments, he plowed through his coursework. In March, he was finally able to graduate with his Associate’s degree—a long-awaited accomplishment.

While thrilled with his success, Mendelson-Curry wanted more and knew he wanted to stay busy. He quickly decided to move on to the Human Resources and Organizational Leadership Bachelor’s degree program. Although a stroke had caused him to lose most of his ability to type and slowed his thought processes and speech, he powered through. “I was determined for the 4.0. I wanted nothing less than an A,” he says. “When people say they don’t have time for school, I like to tell them my story. There really is no excuse—you have to make it a goal for yourself no matter how long it takes.”

Next time Mendelson-Curry’s journey brings him back to the graduation stage he will be receiving his Bachelor’s degree. “If it weren’t for the support of my family, friends and the College, this wouldn’t be possible,” he says. Although he is still on the transplant list, Mendelson-Curry remains in good spirits, knowing he pushed through the worst times in his life to experience some of the best, like graduation. His accomplishments continue to give him hope for a brighter and healthier future and a Bachelor’s degree.

To experience the Rasmussen College Human Resources and Organizational Leadership degree program for yourself, click here.