Alex Grinberg has always had a passion for art. “I was always drawing and doodling,” Grinberg says. Throughout his 15-year career as a software developer, he always had one foot in the design world. He loved being able to design beautiful interfaces at work, but he wanted to go deeper with his creative side.

At work, he was always curious about what was going in the creative department, though he usually had to focus on coding during the workday. He noticed that most software developers were very skilled in coding, but hadn’t taken the time develop their creative side. On the other side, he noticed designers didn’t necessarily know how to code. He saw a niche for coders with a creative side, though not many people who fit that description. Grinberg knew he could fill that role. “I wanted to develop myself,” he says. So Grinberg enrolled in the Rasmussen College Graphic Design Associate’s Degree Program. 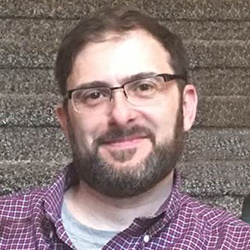 It wasn’t easy working full-time and taking courses full of completely new concepts, from color theory to learning how to use Photoshop®, Illustrator®, InDesign® and other design tools. “I realized how much I didn’t know,” says Grinberg. He worked hard and achieved all “A”s in his courses while maintaining his full-time job and caring for his family. He would work during the day. And, after his kids went to bed, he would focus on schoolwork, taking two classes at a time per term.

Though it was demanding, Grinberg truly enjoyed his classes. His professors inspired him to dive in and turn in quality work. Grinberg treated his classwork like a job—sticking to deadlines, and creating the most beautiful work he could. “It you act like these projects are for work, you work harder,” Grinberg says.

One of Grinberg’s favorite classes was digital painting. He already loved painting as a hobby, but this class truly brought his passion to life. He went beyond just the class assignments and helped illustrate a book his daughter, Sarah, had written— Origami A Folded Poem. Grinberg used Adobe Illustrator to create the pointy and angular graphics that were perfect for a book on origami. Their book was published in 2018. “It was an amazing feeling seeing the book go from digital to physical,” Grinberg says.

Sarah, who was 13 at the time, was especially proud. Since writing her first book, she’s been inspired by her dad and learned how to design as well. Grinberg has helped her learn to use Inkscape, a free tool similar to Adobe Illustrator®. She’s followed YouTube videos and learned to create posters, banners and logos. She’s even checked out books from the library so she can learn about principals of design, color theory and forms. “I couldn’t believe she created such beautiful designs,” says Grinberg. Now, Sarah hopes to attend college and major in graphic design. She’s even written another book that Grinberg is in the middle of illustrating (using Kritia, a free tool for digital painting), which they hope to publish in 2021.

Grinberg’s oldest son, who is in college, has also developed an interest in design because of his dad, as well. He recently changed his major to design with a minor in marketing. And, of course, Grinberg is working on graduating himself. With family and recent job changes he had to put a pause on his degree though he is working on figuring out education benefits with his new company.

Since he only has general education courses left, he’s been able to put his skills to work in a new job as a Full Stack Developer/UI and UX Designer. In his new job, Grinberg was recently asked to create all the visual contents of a new brand in the medical device industry—including the logo, website and business cards. It was a huge, rewarding task but Grinberg knew he was chosen for it because of his unique set of skills as both a full stack developer and a designer, a combo he refers to as being his “Swiss army knife.” “Without Rasmussen, that would have been almost impossible,” notes Grinberg 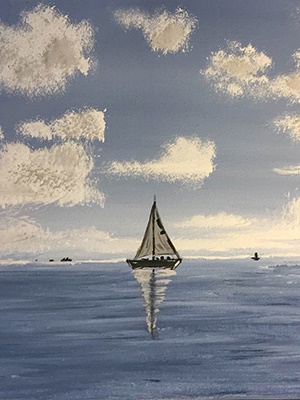 Now, as Grinberg looks to finish up his Associate’s Degree in Graphic Design, he’s considering a Bachelor’s in Graphic Design, as well. He’s also been working on “filling up” his creative memory by reading articles, viewing paintings and getting inspiration from other designers in various designer communities. He advises other aspiring designers to do the same.

He also encourages anyone with a desire to do something new, to go for it “There are hidden skills inside you. If you’ve always wanted to paint or draw and do another job, it’s time develop your skills.”