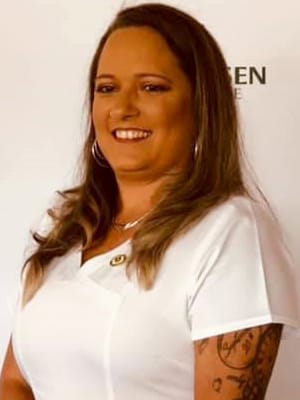 Shelley Chiguina remembers the day of the accident as a beautiful one. She had gone out to eat with friends, planned to study for nursing school finals and was out riding on a motorcycle with her partner, John. As they passed through an intersection, a vehicle making a left-hand turn out of their right-of-way slammed into the left side of the motorcycle. Chiguina and John were both thrown from the vehicle, over a fence and into a yard.

They were both on the ground for 15-20 minutes waiting for the ambulance to arrive. Chiguina knew enough to try to get the dirt out of her leg and roll her femur and tie it back into place. She couldn’t see her partner, so she didn’t know how much blood he was losing (so much that he was at risk of going into hemorrhagic shock). She didn’t know that her toe had been ripped off and was loose in her sock. “I remember thinking ‘This is kind of cool’ and then realizing it was my leg,” Chiguina says.

Chiguina doesn’t remember much of what happened after the paramedics administered pain medication. Months after the accident, she ran into the surgeon who operated on her the night of the accident. The night of the surgery, much of the medical team believed a leg amputation was the simplest option for Chiguina, but the surgeon wanted to consider other options. Even while on pain meds, Chiguina was telling her medical team how she wanted to leave the hospital so she could go to nursing school the next day. The surgeon overheard that and knew that Chiguina was mentally and physically strong enough to try to keep her injured leg.

The road to recovery

Over the next five years, Chiguina underwent 18 surgeries, lost her big toe and had a knee replacement while John dealt with losing one leg from the knee down. She remembers preparing for one surgery where she wasn’t sure whether she would still have her leg or not. Her friend met with her at 4:15 a.m. on the morning of the surgery, in a parking lot, so she could safely ride a motorcycle at least one more time. She cried as she rode around the parking lot for a final pass.

Recovery wasn’t easy, and there were times when she didn’t understand why she survived the accident, but she remained confident that there was a purpose to her journey.

Chiguina says she had always wanted to help others. Growing up on a farm in Texas, she loved taking care of the dogs and being with the horses when they gave birth. Another sign of her caring nature? When she started driving, she would stop at accident scenes to see what she could do to help. But she never imagined she would be one of those people in the accident.

Before the accident, Chiguina was almost done earning her Associate’s degree in Nursing (ADN), but by the time she was ready to resume her studies, the school she had attended had lost its accreditation. Without accreditation, Chiguina would not be qualified to take the NCLEX and become an RN after graduating.

Though she was disappointed that she would have to start over again, Chiguina knew during her recovery that it was time to go back to nursing school. After all, if she could withstand undergoing 120 total hours of anesthesia throughout her surgeries and recovery, how could a little extra time in the classroom be what stops her? That’s when she found Rasmussen College, and she says what she experienced at Rasmussen College surpassed her expectations. Chiguina felt that the courses at Rasmussen were much more challenging than the ones she had taken in her previous nursing program. “Some days I felt like I was in medical school,” jokes Chiguina.

How Rasmussen College helped get her back on track

Though the courses were challenging, Chiguina says she understands they were what is required to become a good nurse. Students are challenged to always be on time and learn to work in a fast-paced atmosphere, just like what they will encounter in the real world. “Rasmussen is training us to save lives,” she says. Because of these high standards, Chiguina says she would trust any of her cohorts or instructors to take excellent care of her or any of her family members.

Beyond the academics, however, Chiguina truly appreciated the care that her instructors showed. Though she does have to wear a knee brace and walks with a limp, she never felt held back or coddled at Rasmussen. “They never questioned my abilities and that meant a lot to me. They would check on me but always believed me when I said I was okay,” says Chiguina. She was given free rein to test her limits herself—which was what exactly she needed. “I made the best decision I could to go back to Rasmussen,” says Chiguina.

Chiguina also appreciated how many instructors at Rasmussen College have been Rasmussen College students themselves. And her advisor constantly encouraged her to keep her grades up, no matter how challenging a course was 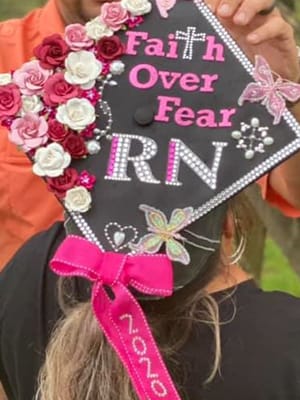 Chiguina finished her ADN during the COVID-19 pandemic. Switching to at-home lectures and labs initially was not easy. Sitting in WebEx lectures with so many other students was a new—and at times difficult—experience, but listening to the lectures at home gave Chiguina’s son and daughter the opportunity to hear them too. Both are interested in pursuing careers in the medical field. Her daughter hopes to become a surgeon, and her son has plans to start pursuing his ADN degree at Rasmussen soon, as well. Though COVID-19 required her to adapt, Chiguina reminded herself of the challenges she has already overcome and that she “didn’t come this far just to come this far.”

Chiguina believes that the Rasmussen name on her resume helped her score interviews she might not have gotten otherwise. Even before graduating, Chiguina was hired on the same trauma floor where she spent extensive time as a patient. She’s ecstatic to get to work alongside the nurses and staff who saved her life. They went above and beyond—even reaching out to check in with John and her after they had left the hospital. One nurse even recommended Chiguina to the hiring manager.

Chiguina has recommend Rasmussen College to many of her friends, and three are getting ready to start nursing programs themselves. She’s told them that though it is going to be stressful at times, they’re preparing to save people’s lives and that makes it worth it. “They’re going to be getting the best education,” she says.

Many instructors and doctors have told her that her experience as a trauma patient will make her a better nurse. She’s excited to share her story and encourage her patients not to give up—and to be with them at some of their most difficult moments. “Once you’re in a situation like I was, you realize how strong you are,” says Chiguina.

While Chiguina was in recovery, she did a lot of reflecting about the day of the accident. Her goal is to take her nursing license and diploma to the site of the accident and ride home on a motorcycle. Though she’s not sure when she’ll be able to do that, it remains a dream. “Even though it ended up the way it did, I want to finish that beautiful day. It’s the end of my chapter,” says Chiguina.

Chiguina encourages anyone who is considering going back to school to go for it. She acknowledges that it can be stressful, but she knows that it’s worth it. Not only will you earn a degree, it will change you for the better. “You have to push yourself to the max to see how strong you are.”