Ja’Mea McNeal had a plan. She worked hard all through middle and high school so she could attend her dream college. She earned a CNA license and two medical certifications with plans of becoming a nurse like her mother. It looked as if all of the hard work would pay off when she was accepted, but soon after Ja’Mea was thrown off course.

Despite earning a $20,000 scholarship, tuition was simply too expensive, and she was unable to attend the college she’d always hoped for.

“It really broke my heart,” she says. “I felt like I had worked really hard to get good grades for nothing.”

She recalls feeling blindsided, unsure of what to do or how to move forward. She started at a different school, but admits that her heart wasn’t in it. After failing and withdrawing from multiple courses, Ja’Mea dropped out.

“I completely lost my way,” she says.

When her grandmother got sick and passed away, Ja’Mea considered trying school again, but her academic record had affected her financial aid, and she was unable to return. With little direction and the responsibilities of adult life building, she gave up on the hope of higher education.

Finding faith in the midst of tragedy

Five years later, she met her fiancé. The two moved to her hometown of Starke, Florida. And not long after, her plans were changed once again. Despite receiving a diagnosis that would make it difficult to conceive, she discovered that they were expecting a child.

Ja’Mea gave birth at 33 weeks due to severe preeclampsia. Her daughter, weighing only 3 pounds, was dangerously premature, and soon developed Necrotizing Enterocolitis. This devastating disease affects the intestines of early infants.

“I had to quit my job because we were in the NICU for months,” says Ja’Mea.

“The surgeon told me she wasn’t going to make it through the night,” Ja’Mea recalls.

But after being on a ventilator for 12 days and undergoing more invasive surgeries, her daughter hung on—though her immune system was significantly weakened.

It was during this time that Ja’Mea also suffered the loss of her house to a fire. The hardship was overwhelming.

Despite devastating tragedy, however, she recalls glimmers of hope and kindness during this difficult period. The hospital staff, impressed by the way she cared for her daughter, suggested she go into the medical field.

“While I was in the hospital, I experienced so much kindness, love, help, and support that I knew I needed to do something else with my life,” she says.

Though she knew that nursing was no longer the path for her, Ja’Mea wanted to pursue an education that would help support her daughter.

“I kept saying there has to be something more for me,” she says, “but I didn’t know what it was.”

Leaving the past behind

Though the process of recovery was slow and sometimes painful, her daughter was finally cleared to attend school. It was this milestone that marked a change for Ja’Mea. She knew it was time to try again at advancing her own education.

Having watched her own mom transition from nursing to medical coding and billing, she made another attempt to follow in her mother’s footsteps. Unfortunately, the programs she found could not provide the kind of structure she wanted.

“I needed more flexibility because we had a lot of hospital stays. I needed something that would help me succeed.” 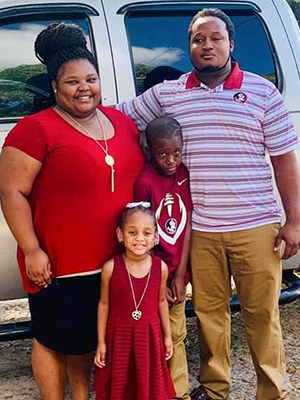 That’s when Ja’Mea heard about Rasmussen College. The online Medical Coding and Billing Certificate program seemed to be exactly what she needed. So, despite feeling held back by her past and unsure whether she would succeed, Ja’Mea enrolled at the Ocala Campus in November 2018.

Ja’Mea worked hard for her education. She credits the support of her family, friends, and people like program manager, Kathryn Lombardi, for helping her through.

“She was the person to convince me to give myself and Rasmussen a chance. She made sure everything was done, so all I had to worry about was school itself. I could never thank her enough for listening to me, encouraging me, and always checking in on me,” Ja’Mea says.

A little less than a year later, she graduated from the program with honors.

Ja’Mea McNeal now works as a financial specialist at a clinic for women with high-risk pregnancies in Gainesville, Florida.

Her role involves coordinating postpartum appointments for those who give birth early, scheduling telemedicine appointments, calling patients, and making sure account information, charges and forms are all correct. Having had a premature birth herself, Ja’Mea carries a special understanding of the patients she works with.

“I know what they’re going through,” she says. “It's one of the reasons I took this position. I love to talk to people and hear their stories. I want to give them hope that it's going to be okay."

For a long time, Ja'Mea didn't have hope. Having drifted so far from the plan she held in high school, she felt that her chance at a better life was over. Now, she realizes that her biggest mistake had nothing to do with her academic performance.

“I think my greatest challenge was myself. I felt like who I was in the past and the mistakes I had made defined me. I didn’t know that I could overcome them.”

Though it wasn’t always easy, Ja’Mea has done far more than overcome. After earning her Medical Coding and Billing Certificate, she decided to continue taking classes and earn her Health Information Technician Associate’s degree. Now, she is up for four promotion options at work.

“It’s not about who I was back then but who I am now. Today I am a mom and a fiancé. I am looking for more in my life.”

For those who feel discouraged by their past, Ja'Mea offers a simple piece of advice.

“You just have to find that one thing that makes you work hard for everything—whether it’s your child, being a first-generation college student, or just wanting to change the dynamic of your family. No matter what it is, just go for it. With a little faith and a little fight, all things are possible.”