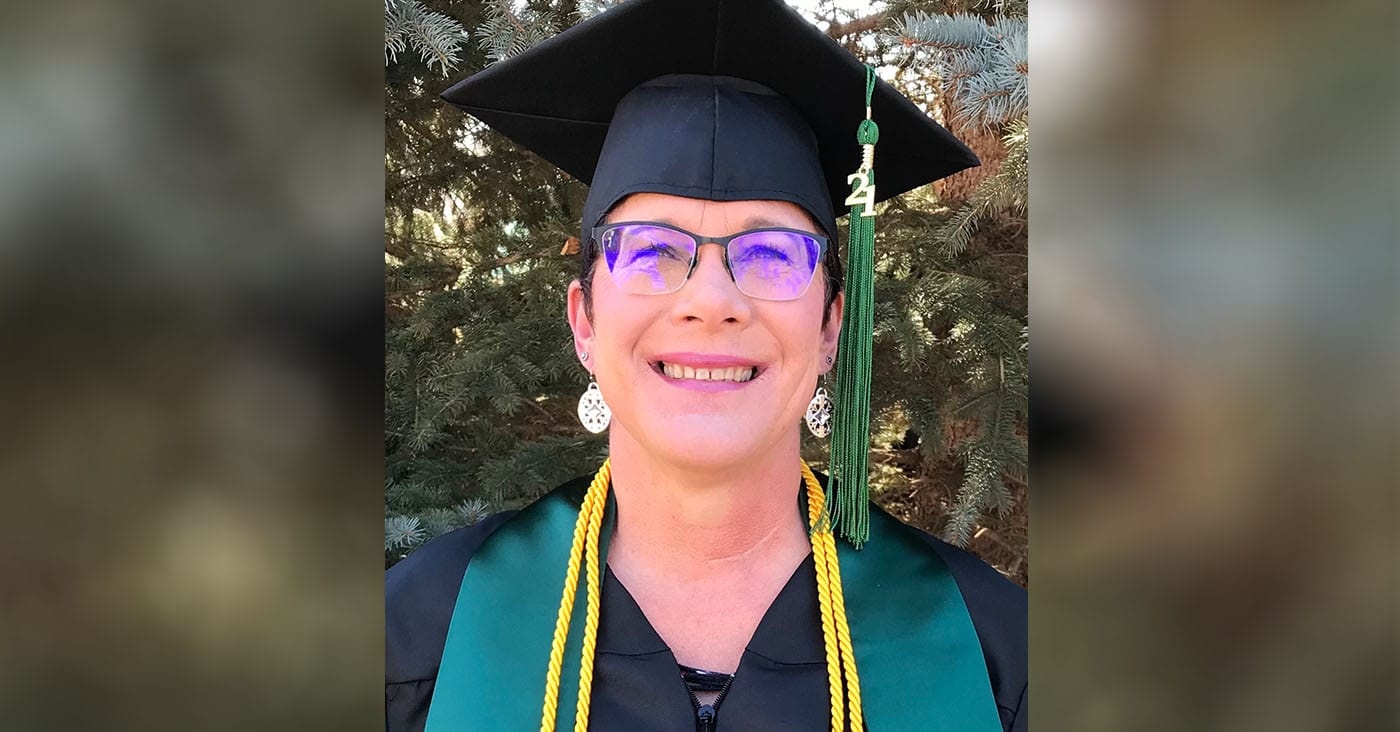 Deanna Kittilson didn’t expect to go back to college. She especially didn’t see herself starting a new degree program after age 50, 100% online. But living in Dunn Center, North Dakota, with a population under 300, her options for in-person classes were limited.

Kittilson had moved back to North Dakota after serving in the Navy for seven years. There, she trained as an X-ray technician and earned some transferable college credits. After moving home, she settled down, got married and had two children, staying home to raise them for 21 years.

As her kids got older, Kittilson started looking into different jobs. While she knew she could get a job at the grocery store in town, she wanted something more. “If I was going to work, I wanted a job with substance. I wanted a career, something that could challenge me,” she said.

She had always been interested in the medical field, so she started looking for a degree that would allow her to enter the medical field as a civilian. Since she lived in such a rural area, she began looking for programs she could complete 100% online. She had considered Rasmussen University’s Health Sciences programs before but decided to officially inquire. “I tried other colleges, and it was very hard to get ahold of someone. But with Rasmussen, it wasn’t,” she said.

Once Kittilson got started, she plowed right through. While she faced several challenges, including getting infected with COVID-19, she kept going. “I might cry, but I won’t quit,” she said.

She was proud of the way she gave her all. She was convinced that being an “older person,” as she said, gave her a leg up. She already knew how to motivate and coach herself. Plus, her previous experiences in the medical field gave her background knowledge she wouldn’t have had otherwise.

She pushed herself and excelled as an honor student. She made strong connections in her online classes as well. Two of her instructors became references for her that helped her snag her first job post-graduation.

Start of a career

While Kittilson was proud of her performance in the program, she was still initially nervous about getting a job without any previous experience working with medical records.

While she was working on her resume one day, she got an email from Amy Ites, a senior career services advisor at Rasmussen. It included a job posting at the one clinic in Kildeer, seven miles away from Kittleson.

Kittilson was surprised something had opened up and applied immediately. She heard from the clinic the day before she went in as a patient to get surgery. While this wasn’t ideal timing, the clinic waited for her to recover and offered her the job.

Kittilson was excited to gain on-the-job experience working with medical records while helping out in any way she could—including driving the clinic’s van to pick patients up for appointments if needed.

While this job is different than any she’s had before, she was pleased her hard work had paid off.

Kittilson knows firsthand that going back to school isn’t easy, but she believes it’s worth it. “You just have to decide you want to do it and put the effort into it,” she says.

She encourages potential students to evaluate their goals, decide what they really want and go forward, knowing they’ll be fully supported at Rasmussen University. “They give you everything you need to succeed.”