Turning Trauma into Support for Others, Land O' Lakes/ East Pasco Graduate Takes Her Experience into a Rewarding Career

Sherry Johnson is no stranger to trauma and loss. While life has thrown the unimaginable her way, she has used the challenges and pain to grow and cultivate her passions. These have ultimately fed her desire to make a positive impact on the lives of others in a criminal justice career.

As a military spouse, Johnson knew that times would not always be easy. However, it was her husband’s dream to serve, and she whole-heartedly supported him. Amidst juggling military responsibilities, they raised their two sons to be smart and capable young men. In 2009, the Johnson family’s lives were shaken—Johnson’s husband, Sergeant First Class Jeremy Johnson, was injured in combat. After returning home to retire, Johnson’s husband struggled with PTSD and brain trauma, so Johnson selflessly decided to dedicate her time to be his caregiver. “It has always been in my nature to help people, whether that is my husband, kids or community. I like to take the pressure off of people and make their daily lives easier,” she says.

While caring for her husband and family became her full-time job, Johnson’s world was again shattered when the excruciating news came that her brother had been murdered. The heartache her family endured was unimaginable, yet Johnson worked to try and hold everyone together. 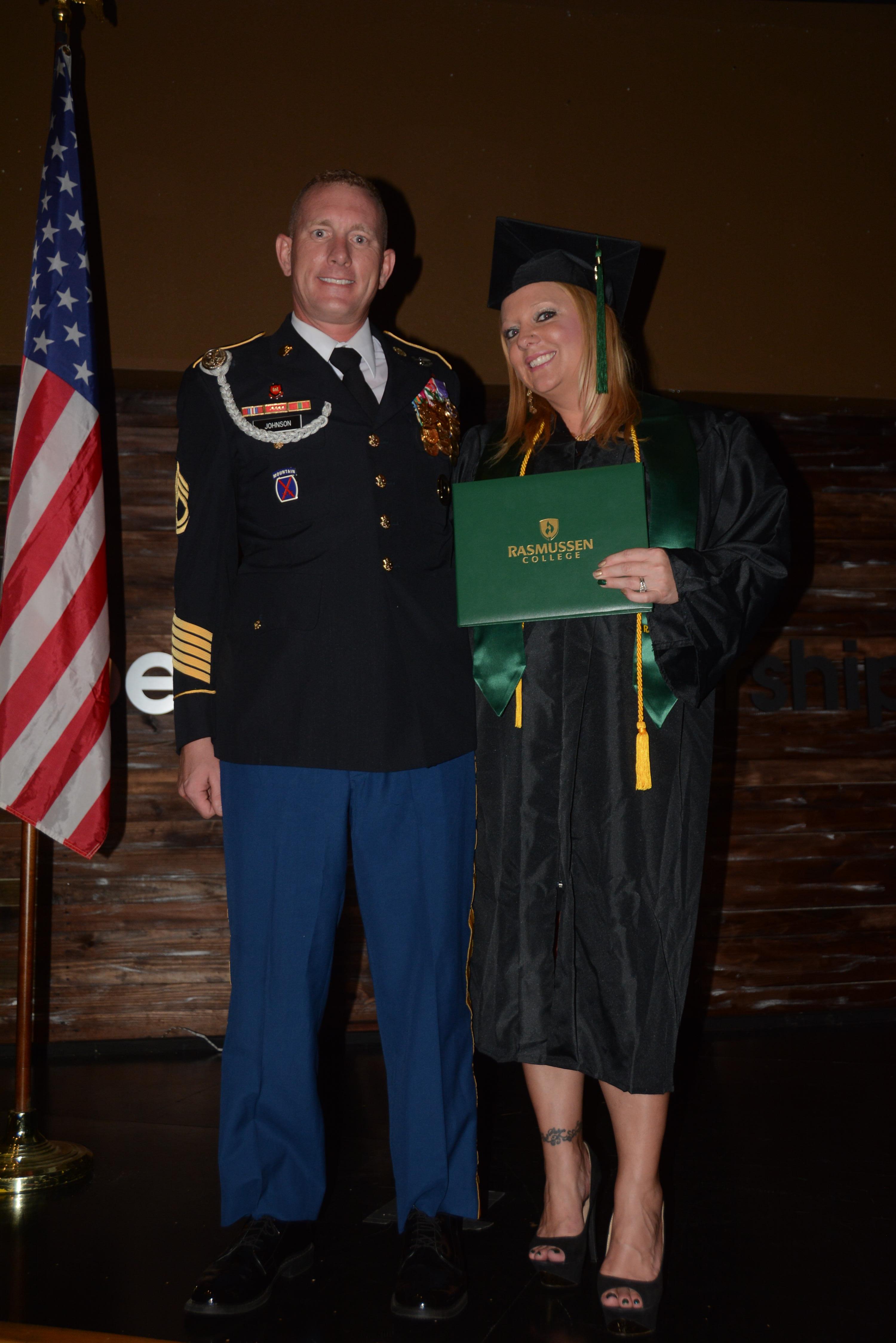 After attending to immediate family and consoling others for so many years, Johnson wanted and needed to do something for herself. She decided to go to college and pursue a Bachelor’s degree in Criminal Justice. Knowing the heartache of going through tragedies, she wanted to share her wisdom with others and translate the negative in her life into a positive experience. Her ultimate goal and life mission became helping those suffering from traumatic injury and loss and working as a grief counselor.

While she was scared to juggle school and provide care for her family, she quickly grew comfortable with online courses and the flexibility they provided. “It took a lot of multitasking, but my kids helped out around the house, which took a lot of pressure off of me. My boys had to learn to be independent at a young age, and I am very proud of them,” Johnson says.

The counselors at the Rasmussen College Land O' Lakes/East Pasco campus also provided guidance for Johnson. “The College was really great. The counselors helped me balance my busy schedule and were supportive when I needed it most,” says Johnson. Her instructors acted like her cheerleaders, and she hopes to exemplify that support in her future roles in counseling.

While taking a Victims of Criminal Justice course, Johnson’s life seemed to parallel the coursework. She and her family were enduring the trial for her brother, and Johnson was comforted by the fact that she knew the judicial process and what to expect from her class discussions. She was able to comprehend what the attorneys were talking about and could help her family better understand the process as well. It was during this difficult time she was certain she wanted to help other victims of violence, as well as their families, in the future.

In less than three years, Johnson made it to graduation—the first in her family to do so. Not only did she get to walk across the stage to accept her degree, but also was asked to speak to her graduating class. “It was a very humbling experience, and I felt so honored to be able to speak in front of such a large crowd with my whole family cheering me on,” she says. Johnson shared her story of seeing the potential in everyone and striving for your dreams, no matter how much time has passed, or how many obstacles are thrown your way.

“The sense of self-worth you feel from going to college and the feeling of success is undeniable,” Johnson says. “I was so timid in the beginning, but as I continued my confidence grew, and I was proud of how far I had come. I have become a role model, and that is truly fulfilling for me.”

To learn more about where a degree in Criminal Justice from Rasmussen College can take you, click here.