The Many Doors Rasmussen Opened for a Practical Nursing Student

Megan Wohlman is expecting to graduate from Rasmussen University in March 2020 with her Practical Nursing diploma. Her last quarter's grades reflect a student excelling in her educational pursuit, although where she is now has been a long journey from where she was when she began.

Wohlman’s pursuit to becoming a nurse has not been a straight path. Prior to starting at Rasmussen, Wohlman attended three other colleges. She explained that the other colleges were great in their own way, but not for her.

While attending an institution prior to Rasmussen, her physical and mental health spiraled downward due to unforeseen events. It affected her ability to be the type of student she wanted to be. During this time, a professor at the college she was attending told her she wasn’t going to be a nurse and to quit her nursing program.

Wohlman, not giving into defeat, found herself visiting Rasmussen University. She was nervous, as she felt Rasmussen was her last shot, but her nerves dissipated quickly. She remembers an instantaneous gut feeling that Rasmussen was going to be different once touring the campus and meeting with her advisor.

“Rasmussen understands that life happens, and they want you to succeed no matter what,” Wohlman stated. 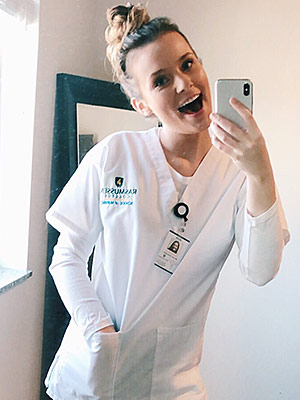 There is a definitive moment from Wohlman’s childhood that set her life on the course to becoming a nurse. Wohlman lost her grandmother to cancer at a young age. Despite her young age, Wohlman distinctly remembers the days with her grandma in the hospital. On one such occasion, a nurse came into their room with contagious energy that brightened the mood of Wohlman’s grandma and herself. They found themselves smiling and laughing—it was what Wohlman explained they needed in that moment.

She states, “I remember it so well. It is almost an out of body experience. It was just so impactful—I knew that was what I wanted to do. I wanted to be a nurse.”

Wohlman expresses her desire to not only help patients, but to also be there for the patient’s family as well. In her short life, Wohlman is no stranger to being the family member to a sick loved one. Losing 12 family members within one year has had a significant impact on her life but she explains that this experience will also make her a better nurse.

“I get what they [the family] are going through. I’ve been there,” Wohlman said.

Her initial gut-feeling about Rasmussen didn’t let her down, as Wohlman has countless experiences of instructors going above and beyond since starting her program.

“If you are open and communicate with them [instructors], then they are going to work with you,” Wohlman stated. “The program does get harder, as it is an accelerated program, but the teachers want you to succeed.”

More than just the faculty members have made Wohlman feel as though Rasmussen is her second home. She has also built a close-knit group of friends in her Nursing program.

Wohlman reflected on how at the start of her program a teacher stated that her peers would become her family, “and she was right.”

Her cohort checks up on one another and supports each other beyond just school work. Towards the end of her last semester she was having a rough couple of days and received a message from one of the other women in the group who just wanted to check in because she noticed Wohlman seemed a bit distracted.

“It’s amazing to have people who actually care,” Wohlman stated.

The environment at Rasmussen University has allowed her to achieve higher academic success. Wohlman is proud of the work she has accomplished since starting at Rasmussen . Looking to her future, she feels many doors are open to her because of the education she will have received. A potential move to Colorado, becoming a travel nurse and continuing her education further are all viable options she may pursue.

Wohlman hopes more students like her find their way to Rasmussen University.

“I don't know how to fully thank the teachers. I want the teachers, the faculty, the University, to know I see what they are doing and I'm so thankful. It changed my life dramatically. I probably wouldn't have made it this far without Rasmussen.”