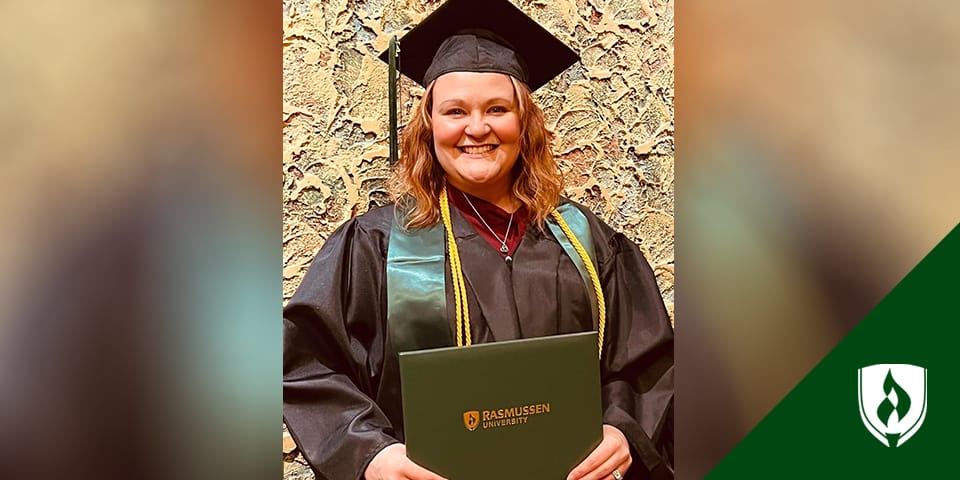 If you’ve ever wondered whether a love for crime shows is reason enough to get a degree in criminal justice, you’ll enjoy Melissa Pitchford’s story.

“To be honest, I'm a sucker for crime documentaries and crime shows and forensics and all that kind of stuff,” Melissa says.

While it may have drawn her to the field, her passion for the justice system goes far beyond the screen.

After working in the hotel industry for many years, Melissa decided it was time to pursue education. She earned both her Associate’s and Bachelor’s degrees in Criminal Justice from Rasmussen University. From the very beginning, she was all in.

“I knew for the positions I wanted, I wasn't going to qualify with just an associate’s. So, my goal even before I started was to get my bachelor’s,” she says.

Quickly, Melissa understood the real world of criminal justice was far different than the one she enjoyed from home.

“One of the first things they tell you when you're going to school in this field is ‘Things don't happen the way it's on TV,’” she admits.

But as she took more courses, Melissa began to realize how many different types of careers she could pursue in criminal justice.

“When I first started my degree, I actually wanted to do something like a police officer or a detective.1 As I took different courses, my interest kind of changed. I wanted to be an advocate and a voice for those who may not have one,” she says.

For Melissa, being an advocate is more than a textbook idea. It’s personal.

“My husband is Black, and my children are mixed,” she says. “Before I went to school for criminal justice, I can't even count on my fingers how many times I was with my husband and we had a bad law enforcement encounter.”

As she continued to study the justice system, Melissa was drawn to connecting with people of different backgrounds.

“Everybody comes from different cultures,” she says, “and that really does affect the way you communicate with law enforcement. It's really important to understand that in order to have a successful interaction.”

In addition to being an advocate, Melissa is passionate about educating others on their rights and responsibilities. Though she knows there’s lots more to learn, she ultimately aims to become a police auditor and provide training for critical situations.

Building a Foundation of Trust

Since graduating in March of 2022, Melissa now works as a human services professional in Wisconsin. She oversees cases of reported child abuse, mental health crises, juvenile delinquency and more—a job as challenging as it sounds.

“You do take a lot home with you,” she says, “and there are some cases where it takes a few days for you to overcome it.”

When it comes to working with youth in the criminal justice system, Melissa’s empathy is a strength.

“Often, the kids just feel like there's no way out. It's this whole cycle. We try to break that cycle and let them know there are people, support systems and resources that can help them out. I think that's the most positive thing about my job that I enjoy,” she says.

While certainly not every case turns out perfectly, Melissa says there are many positive cases to keep her going.

On one occasion, Melissa recalls a young woman at a work crew program. While she initially acted rude, disinterested and angry, Melissa did not give up.

Eventually, the young woman wanted to keep coming back to the program even though her orders were over.

“It was such a change from seeing her in the very beginning—when I couldn't even get her to look at me,” she says. “I'm doing something right that she looks at me and she can trust me. That’s really rewarding.”

A Better Justice System for a Better Future

It’s hard to imagine being ready to deal with such intense situations, but Melissa says her education made all the difference.

“I most definitely feel like I was prepared for the role,” she says.

For one, Melissa credits her participation in the peer tutoring and mentoring program at Rasmussen University.

“I think that was a very important part of my experience because being a tutor and a peer mentor, you have to have a certain GPA average. So, it definitely held me accountable.”

Even more importantly, she credits her instructors, remembering one in particular.

“His name is Richard Wright. He's had probably every career that you have in criminal justice. He made sure to go over how important diversity is and treating everyone equally.”

“He really opened my eyes to what's wrong with the criminal justice system,” she continues, “so that it wasn't such a shock when I started working, and then of course, what we can do to eventually change that.”

For anyone else considering a degree in criminal justice, Melissa says, “Go for it.”

“There are so many different doors that a criminal justice degree can open for you. You're not going to be stuck in just one position… And the benefits of holding a state job, county job or even a federal position are worth the effort.”

While Melissa knows things won’t come as easy as on TV, she is dedicated to helping create a better justice system for a better future.

In Minnesota, the Criminal Justice Associate’s degree program does not meet the standards established by the Minnesota Peace Officer Standards and Training Board for persons who seek employment as a peace officer.