At a young age Nikita Milton was exposed to the world of healthcare and medicine. Milton’s mother had epilepsy and Milton was her caretaker from a young age. As a natural caretaker, she finds purpose and meaning in helping others.

Now, as an adult, Milton is a single parent of two children—she has a daughter who is nearly ten and a son who is five. Unfortunately, after a tragic accident, her son suffered a traumatic brain injury at six months old that has since resulted in development delays. For many years since, Milton’s dreams were put on a shelf. 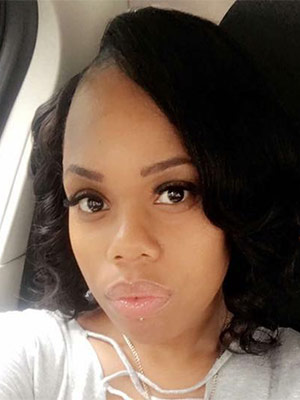 Milton heard about Rasmussen College when she was looking to become a registered nurse (RN). She attended a nursing information session to learn more about the College’s Professional Nursing Associate’s degree program. What really piqued her interest was the College’s Flex Choice® learning options. The learning option allows students to combine traditional online coursework and self-directed assessments, creating a more affordable way for individuals to receive credit for what they already know. As she was already working as a licensed practical nurse (LPN), being able to apply what she already knew to her coursework to more efficiently make her way through the program was a promising opportunity. It would allow her to earn her Associate’s degree without having to spend an abundance of time or money on classes she already had prior knowledge in.

With Flex Choice, Milton was able to start at Rasmussen with a cohort of students who had already been through their prerequisite courses. This isn’t the only way Milton feels the College looks out for its non-traditional college students. Milton mentions the resources of the Library and Learning Services which guides students through critical skill building and provides resources to help students learn how to write in APA style, create a Grammarly account or sign up for tutoring. She also mentions the support she has received from her instructors and her advisor, who seem to understand that students are not just students, but are individuals who may be parents, full-time professionals, caretakers and more. Milton’s advisor continually went above and beyond.

“My advisor is amazing, she is such a motivator,” she says. “If I want to give up or I’m overwhelmed or a class doesn’t fit with my schedule, she will go that extra mile to try to accommodate my needs, and my fellow classmates’ needs. Everyone speaks so highly of her.”

The community of Rasmussen College is one that Milton is happy to be a part of. Milton is a strong believer in the power of a community, and its ability to lend a hand-up when people need it most.

Her 2018 Christmas present to herself was starting a nonprofit, named after her daughter, the Neenah Rose Project Foundation. The nonprofit serves at-risk teenage girls and assists them with understanding their power of choice and control of the decisions they make in their lives. Those decisions often bubble up to their relationship with food and their health, their relationships with romantic partners or decisions surrounding their futures.

Milton is also highly involved in another Chicago-area nonprofit, Gyrls in the H.O.O.D., which her best friend started. This nonprofit also works with teenagers in their community to promote healthier reproductive health outcomes and responsible decision making. Milton has been close to this nonprofit since its origin and does a lot of the educational work with the teens. GYRLS in the H.O.O.D. started when Milton and her friend wanted to provide guidance and support to teens in urban Chicago. Milton had to figure a lot out for herself as a teenager. Milton uses the phrase “bumping her head against a wall” to describe her experience of having to learn things that other teenagers where taught from supporting adults in their lives. Her goal, she states, is to limit the amount of times the teens in the program have to bump their heads to figure life out.

“It is very motivating to help. And we hope it’s motivating for them to have someone in their life who can say I’ve been there and this was what I did,” Milton states.

Between her work with the Neenah Rose Project Foundation and GYRLS in the H.O.O.D., Milton has contributed to raising funds for the purchase of toys and other needed items, including 100 bicycles, for children whose families may not otherwise be able to afford them. She also focuses her efforts on raising funds for the purpose of sending at-risk youth to Washington, D.C. for educational tours.

Her work with nonprofits, her commitment to education and her dedication to her family, are all part of why she was awarded an Angeline Gale Memorial Scholarship this year. The scholarship’s purpose is to assist women whose educational pursuits have been delayed due to a variety of personal circumstances. Milton explains that she submitted her story to the scholarship board including the barriers she has faced, and what she is involved in now. When she received a call from the board that they wanted to meet with her, she was excited to have the opportunity to speak with them and was even more excited when she was told she would be receiving the scholarship.

Milton is grateful for being selected as a recipient of this scholarship and explains how helpful the financial support is to her, especially as she is getting close to the end of her program. Milton anticipates graduating in March 2020 with an Associate of Science in Nursing degree.

She looks forward to fulfilling her goal of completing her schooling and becoming a Registered Nurse. Milton has no doubt that her education from Rasmussen has prepared her to become an RN. She feels Rasmussen has provided her with the tools to sharpen her critical thinking skills and has given her opportunities to practice in clinical settings.

“It is an amazing College, for single moms or people who have barriers, it is not just catered to one group,” Milton states. “I believe anyone could come in and fit at Rasmussen.”