Before starting school at Rasmussen College, Brett Riegert worked weekends as an aircraft lineman, maintaining the planes and directing plane and baggage movement. He was always fascinated by the giant GPS computer systems in the planes. He would watch them be installed and maintained—and even got to play with one once.

He loved how much was going on in the systems, how much he could adjust, but he wanted to know more. He wanted to know the inner workings of these systems. This piqued his interest in computer science. 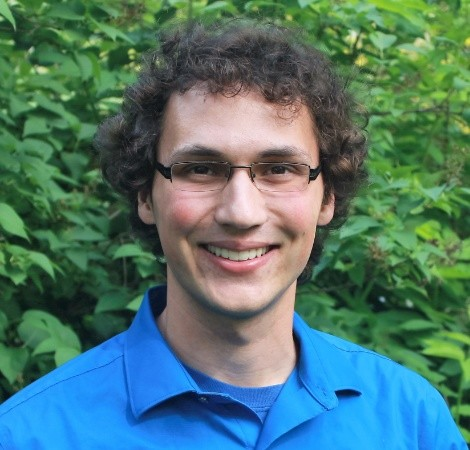 During this time, Riegert was aware he hadn’t been taking school seriously while working toward an associate’s degree in graphic design (at another school). He had always been a creative guy, but he wasn’t so sure graphic design was the right field for him. Once he decided that he wanted to focus his creative energy toward computer science, he couldn’t be stopped.

Though Riegert wanted to finish up his graphic design degree as well, he enrolled at Rasmussen College at the same time, transferring the credits he could. “It was actually pretty simple,” he says of the overall transfer process.

From color to code

Riegert began the Bachelor’s in Computer Science program online. Online classes were a brand-new experience for him. Although reading online textbooks and the large amount of writing were challenging, the online classes provided the flexibility he needed to finish his graphic design degree at the same time. He would drive to graphic design classes on-campus at the other local college, and work on Rasmussen College Computer Science online coursework in the afternoons.

While he was working at the airport a few times a week, he would bring his laptop with him and chip away at his coursework during downtime. The fast-paced classes kept him motivated and helped him finish his degree more quickly than he thought he might have in a more traditional college setting.

“You lose the social factor, but you get out faster … which I prefer,” Riegert says of the online class format.

Riegert loved his computer science classes, which confirmed his initial interest in the subject. In school he learned Xcode, software development tools by Apple. He especially valued what he learned about time management and coding: “Keep it simple,” he recalls. He chooses to follow this mantra, instead of slaving away over complicated code. This helps him manage his time and stay on track.

Rasmussen College’s Computer Science program prepares students to learn essential skills in Microsoft® Azure and provides a foundation for mobile, analytics and cloud computing. Students like Riegert can choose to specialize in either Apple® iOS or Universal Windows mobile application development to acquire skills that they can use in their future workplace.

Designing his own future

Riegert stayed the course and, after all the hard work he put into his education, he was driven to land a job in computer science. His resume was unique, highlighting both his Bachelor’s degree in Computer Science and his Associate’s degree in Graphic Design.

Almost every interviewer asked him about this unique combination, because some would perceive them to be opposites. But he was able to explain how his artistic side—developed through his graphic design work—and the skills learned through his computer science classes, can produce incredible work. “It was fun to answer that question,” he says.

After sending out dozens of resumes and completing several interviews, he landed a job at Wipro doing work for U.S. Bank. Hired as a contract IT engineer, Riegert uses the time management and application life-cycle knowledge he learned at Rasmussen College on a regular basis.

Riegert says he’s challenged at his new job and loves that “every day is different.” He’s currently learning Java®, another programming language, at work. Though it can be stressful to be learning so much on the job, he understands the importance and embraces the challenge. “I need to learn as much as possible right now,” Riegert says. He’s excited to see all the opportunities that come his way.

The curriculum in the Rasmussen College online Computer Science program prepares students to apply for in-demand jobs such as:

“Do more than what the textbook tells you,” Riegert advises. Try to create your own programs with different specifications. Go above and beyond the professor’s requirements and make your own applications. Most importantly, keep practicing. “After three weeks of not doing it, you’ll forget,” he warns.

Brett Riegert’s story proves that there isn’t one singular path to a computer science career. Whether you’re working at an airport, an office or anywhere in between, you can pave your own path toward a fulfilling career in technology.

Curious whether you’d be a good fit in the field? Find out whether you have the natural qualities in our article, “6 Computer Science Skills You Didn’t Know You Already Had.”