“In January, we started hearing rumors about what was happening in China,” recalls recent Rasmussen University Fort Myers, Fla., nursing graduate, Zachary Wolfskeil. “A little over a month later, we had our first suspected patient.”

Zach was excited about earning his RN license and getting hired in an ER at a local hospital soon afterward, but he had little idea of what was to come. For many graduating healthcare workers, the field they've entered is unlike the one they anticipated.

“Things change pretty much on a daily basis,” he says.

Despite frequently facing new challenges, Zach has been moving forward and learning to adapt along the way. 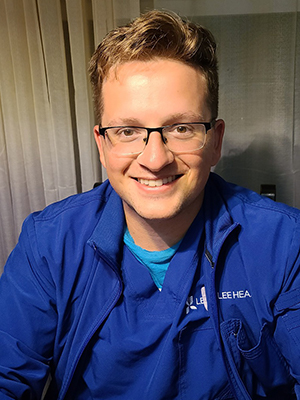 When he first started taking nursing courses at Rasmussen in 2018, Zach had no healthcare experience.

“That first quarter was pretty difficult,” he says. “I had to learn how to think like a nurse.”

Luckily, he wasn’t the only one in his family to pursue this profession. His mother has been a nurse for 33 years—23 of which she spent in an emergency department.

She encouraged him to study every day and emphasized the importance of taking time to really learn the material. With this advice in mind and lots of hard work, Zach passed the NCLEX on his first try and received his RN license on January 31st, 2020.

Training amidst a pandemic

While Zach was initially hired in the ER, he worked there only a few weeks before moving to the COVID floor toward the end of March. With the need for healthcare workers reaching an overwhelming high, even those in training like Zach are doing what they can in response to the outbreak.

He admits it was intimidating at first. As the fear of limited personal protective equipment (PPE) circulated, morale was low. Staff worried there wouldn’t be enough to go around.

Thankfully, Southwest Florida—where Zach works—has not been particularly hard-hit compared to many other areas. He reports that protective gowns and N-95 masks are designated to each patient’s room. Surgical masks are worn even at the nurse’s station and all staff is given a pair of goggles. Though the equipment is uncomfortable and can make communication difficult, it’s a high priority in order to keep everyone safe.

This includes extra precautions to protect the employee's families. Like many in the field, Zach worries about potentially infecting his loved ones—especially if he were to be an asymptomatic carrier—and is careful not to bring exposed scrubs home with him.

Despite the regularity of safety measures, however, it’s still difficult to stay organized amidst shifting conditions. Within the first two months of being hired, Zach was bounced between four preceptors and struggled to find his place on the team.

Not only do nurses have to coordinate with doctors, techs, and other nurses, but they must manage multiple patients at once. Although Zach is thankful that his unit has good ratios of one nurse to every three patients, it doesn’t take much to upset the balance.

Yet, Zach admits that it’s not all as bad as it may seem. He recalls one hopeful incident during which a patient was put on a ventilator for a couple of days but soon after recovered and was able to go home.

Finding hope in a crisis

It’s been about a month since Zach started working in the COVID unit. And while things are far from normal, he maintains hope for the future.

“I think people are in much higher spirits lately,” he says. “Our census is down, and we’re definitely not seeing cases like we used to.”

Up ahead, Zach faces the end of his training. “It’s scary,” he admits. Nobody wants to make mistakes, and, as any nurse will tell you, the first year of working can be uncomfortable while you learn and grow. But Zach takes comfort knowing that his coworkers will be there for him.

“You’re never really on your own,” he says.

Small successes like getting the perfect IV line, receiving a thank you note from a coworker, and connecting with grateful patients are what keep Zach going.

Though he might not have anticipated graduating into a global pandemic, Zach knows he’s doing exactly what he set out to do—care for those in need.