Sara Niewind earned her Diploma in Practical Nursing (PN) from the Rasmussen College St. Cloud, Minnesota, campus in 2015. Then, four years later, in March 2019, she again crossed the Rasmussen College graduation stage and received her Associate’s degree in Nursing (ADN). Niewind’s initial decision to pursue her Associate’s degree came at a very difficult time for her and her family. While she was experiencing a trying time, her classmates and instructors thought her perseverance and commitment to completing the program deserved special recognition.

Prior to starting the Practical Nursing program and becoming a licensed practical nurse (LPN) she found herself working registration in the Emergency Room at St. Cloud Hospital. This job and the people she worked with gave her the push to begin looking into becoming a registered nurse (RN).

Initially, she registered to begin an online program through a different institution. However, her life took a very unexpected turn. Her mother was not doing well and was admitted to the hospital. While there, it was discovered that her mother had cancerous brain lesions.

Tragically, the health of Niewind’s mother declined, and two days prior to Niewind beginning the program her mother passed away. This was an extremely difficult time for Niewind and her kids, as her children were very close to her parents. Blindsided by this life altering event, she was not finding success in her nursing program. This is when she reached back out to Rasmussen College.

"After speaking with her former advisor, Niewind decided to stop her current program and start the" Professional Nursing program "at Rasmussen College instead. Since she had already completed Rasmussen’s PN program she was familiar with the College and knew the support she could expect from her instructors. At Rasmussen she knew she would be better able to organize her school, work and life schedule around one another." 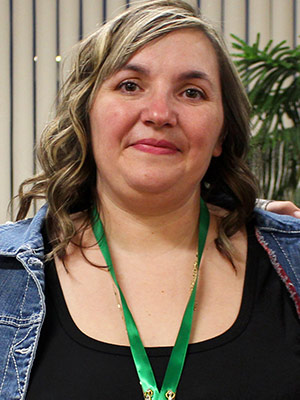 As a single mom, Niewind explains that there were times she would go a couple of days without seeing her kids because of her demanding work and course schedule. However, she had comfort knowing her parents were there to step in and help.

Meanwhile, Niewind’s father was also struggling with his health. He went into the hospital after a fall and it was discovered he had broken his hip. Not only was Niewind grieving the loss of her mother, working fulltime, going to school fulltime and being a fulltime mom, but she also became her father’s primary caretaker.

Sadly, her father’s health declined after his fall. A year and two months after her mother died Niewind’s father also passed away.

At the time of her father’s death, Niewind was in her third quarter of the ADN program and was supposed to begin the clinical portion of the program the next day. However, after informing the College of her situation, her clinicals and coursework were all given extensions so she could spend much needed time with her family.

Niewind expresses how thankful she was for the support she received from her classmates and instructors once returning to class.

“My classmates were really supportive. There were three or four of them that each week asked me how I was doing,” Niewind states. “My clinical instructor also checked in with me weekly to see how I was doing.”

Niewind explains that her classmates were not just checking in to see how she was doing, but also checking in to ensure she was on track. She expresses how helpful it was at that time and how it gave her the push she needed to continue to stay on top of her coursework.

As Niewind continued to work towards completing the program, she emphasizes how her determination and perseverance came from her kids. “Everything was worth it,” Niewind states. “I always wanted to be an RN. I wanted to show my kids that hard work does pay off in the long run and no matter how much we struggled that it does work out.”

Niewind graduated in March of 2019 with her Associate’s degree in Nursing. Her persistence through extreme personal turmoil did not go unnoticed by her classmates or instructors. At her pinning ceremony, a traditional ceremony for nurses where the faculty of the program welcome newly graduated nurses into the nursing profession, she was recognized by her instructors and peers for her accomplishment. Two additional pins adorned Niewind’s lanyard that evening—two angels, one for her mother and one for her father.

Niewind now works at St. Cloud Hospital as a nurse, as well as an in-home care provider and at Paynesville Nursing Home. She is proud of herself for completing her second program at Rasmussen College and becoming a registered nurse. She stays in contact with some of her instructors and even works with a few of her classmates at St. Cloud Hospital.

Rasmussen College is proud to have students like Sara Niewind in its classrooms and now as a graduate serving her community.