It wasn’t long into his position as a parts runner at a car dealership when Shawn Schulz realized he was much more interested in computers than he was in cars. Most people, he says, just wanted their computer to work, but that wasn’t the case for Schulz. “I always wanted to know more. I wanted to know the process. Why is it doing this and how can I fix it? That’s how I realized that working in information technology could mean a better life for me.”

Schulz started working at a local car dealership right out of high school. Though he tried night classes at the time, he wasn’t interested enough to continue. At work, he was promoted quickly, and though he was thankful to have a steady job, he knew this was not the job he wanted to retire from. “I don’t know how many hours I sat at the place and thought, ‘This is not for me,’” remembers Schulz. 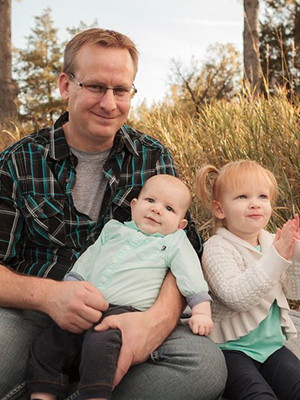 After staying for 20 years, he was burnt out. Schulz continued to be more interested in computers than cars. He had become the go-to tech guy at work and among his friends. Though he had sent out some applications for some tech jobs, with only self-taught skills he wasn’t even able to get an interview. Rather than complaining to his wife or friends, he decided he wanted to make a change. “I realized I’m the only one who is going to do something about it.”

Thinking about going to back to school wasn’t easy. There were a lot of new terms—FAFSA, adjunct professor, etc. “I had no idea what any of that stuff was,” says Schulz. He didn’t even know exactly what he wanted to do. But an admissions advisor at Rasmussen College was able to help him figure it all out. The advisor asked exactly what Schulz enjoyed and recommended a degree in information technology. Schulz pushed through initial nerves over starting something new. He knew it was worth it. He was excited to have something on paper that showed he not only had 25 years of customer experience, but also a college degree. “That might open the door to something better,” he hoped.

Schulz decided he would take the first step and get an Associate’s degree in Information Technology. He continued working full-time at the car dealership, including an extra Saturday every month, while he took courses. Since there were slow days at work, he was able to do some school work during the weekdays. He prioritized work during the day, and often had to spend many nights on schoolwork after his kids were in bed. There were certainly stressful weeks, but Schulz made the courses work for him—taking just a few at a time, never more than three at once. He also utilized as many Flex Choice® options as he could. “I maxed out on those just to get it done.” He worked through difficult courses including algebra and one on agile software processes, which he now works in.

Schulz was very motivated. “I wanted to get everything done. I had one child and another child on the way.” In the last few months of working towards his Associate’s degree, he had a new goal: finish by the time his wife had their second child. Schulz wanted to be able to help as much as he could. He remembers working on his last assignments as his wife recovered in the hospital. “The internet was terrible!” he jokes.

After graduating, Schulz was able to leave the car dealership and establish a career in IT. Now, he works as a quality assurance software analyst at National Information Solutions Cooperative (NISC). About three months into the position, when the COVID-19 crisis hit, he was assigned to work from home. Though it’s been challenging to learn how to do this new job remotely, he’s been able to lean on his coworkers and his experience with 100% remote courses. He’s thankful to work just 40 hours a week and have generous time off so he can prioritize time with his family.

Though going back to school while working and being a dad wasn’t easy, it was worth it for Schulz. Flexibility was key. “I chose Rasmussen College because of flexibility it allowed me,” he says. Schulz believes now that being ready for college is about commitment. “You have to want to get it done. If you make the decision, everything else will work out.” He believes that once that decision is made, you can find time and the motivation you need.

Though Schulz is busy with his new career and parenting, he’s considering advancing his career by earning a Bachelor’s degree in Information Technology Management as well.