For Monica Rivers-Dawkins, a traveling CNA from Alabama, there is nothing that could stop her from becoming a nurse—not even a blizzard.

Monica is no stranger to new places, but when she started working at Miller Pointe Nursing Home in Mandan, North Dakota, she fell in love with the facility and its people.

In January of 2018, she and her husband moved into an apartment nearby and started a new chapter of their lives. That same year, Monica decided it was time to pursue nursing.

“I wanted something more,” she says. “I wanted to do more and I wanted to make a bigger impact.”

So, in the summer of 2018, Monica started looking for nursing schools and found Rasmussen College. There was only one problem—the nearest campus was 3 hours away in Fargo.

She visited anyway, looking for some sign that it was meant to be.

“My advisor told me it wouldn’t be impossible, but it wouldn’t be easy,” she says. “And that's all I needed to hear because that was my little glimmer of hope.”

With that, Monica started taking courses that October to earn her Associate’s Degree in Nursing (ADN).

Monica took her first few courses online, but toward the end of her first term, she needed to attend in-person labs at the Rasmussen College Fargo campus. Commuting six hours total is challenging enough, but doing it in the middle of a brutal winter is almost unimaginable.

“There is nothing that compares to a North Dakota winter,” she says. “It’s like a frozen tundra.”

Monica remembers one close call in particular. As usual, she planned to get on the road at 4:30 a.m., just in case she was delayed by weather. Forecast of a ground blizzard was looming, so she emailed her instructor with the route she was taking and contact information for her family. With winds as strong as 50 to 60 miles per hour, white-out conditions and dangerous snow banks across the road, it was sure to be a dangerous ride.

Thankfully, Monica’s instructor emailed her back just in time, urging her to stay home.

“I didn't have a plan but I had her support,” recalls Monica. “She really worked with me to make up that time which was really special.”

On top of narrowly avoiding numerous accidents, Monica often had to face exhaustion on the road.

“I would work a 12-hour night shift and drive three hours straight to school. The lecture would end at 1:30, and I would drive straight back home,” she says.

During this time, Monica would often commute to Fargo one to four days a week. Though it was certainly trying, she maintains that her drives were not all bad.

“I would be so exhausted,” she says. “But it was so well worth it because I felt like I was making so much progress, and I was learning so much. It just never really phased me.”

In fact, she now cherishes her time in the car, listening to nursing lectures and immersing herself in her studies.

By July of 2019, Monica was doing well in her courses. Not only had she maintained a 4.0 GPA but she had also made the honor roll and Dean’s list. For many students, it’s enough to manage work, family life, and doing well in school, but Monica is not the type of person to settle for even her best. 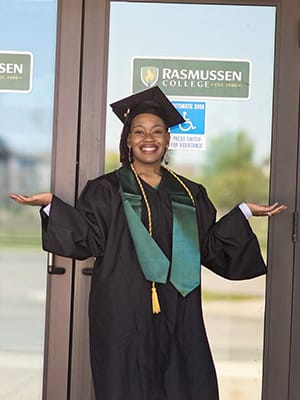 When she saw a need for community involvement, Monica reached out to her Rasmussen advisor, wondering if there was anything she and other students could do to help. Her advisor suggested restarting the nursing club, and, before she knew it, Monica was president.

“I felt afraid but ready,” she says.

Through this club, she and her classmates have accomplished a lot. She recalls hosting a rummage sale, providing toiletries for families at a local NICU and delivering baskets full of coffee and snacks to working nurses.

Perhaps one of the most important things she has taken away from this experience, however, is conversations about diversity with her classmates and instructors. With members from all races and cultures, this club illustrates the many ways different people can look at the same issue.

“It gave me an opportunity to grow my leadership skills and learn how to work with people—especially people from different backgrounds,” she says.

It’s this same appreciation for diversity that Monica has carried into her job at Miller Pointe. The nursing home she works at has many patients of strong German and Scandinavian descent. Things that used to seem odd to her—like Knelfa soup, Coogan, and even the idea of raising livestock—now make sense in the context of culture.

“I didn't know why these things were so important to them, but now I know it makes them feel closer to home and closer to normal,” she admits.

Big plans for the future

In June of 2020, Monica Rivers-Dawkins graduated from her ADN program. Like many, however, her graduation plans were blindsided by the COVID-19 pandemic. Without hugs and high fives, her much-anticipated ceremony was not as she had imagined.

“Saying goodbye was bittersweet,” she says.

For those who are considering going back to school or are in the midst of their program,

Monica offers the same advice she was first given:

For her, the motivation to keep going, despite exhaustion and anxiety, is rooted in beating her own best—not comparing herself to others.

“If the door is closed, go through a window,” she says. “If the window is closed, dig a tunnel.”

It’s this kind of determination that carries Monica forward and inspires those around her.