The Stole of Gratitude is worn by Rasmussen College graduates during their commencement ceremony every year. After the speeches have been made and the caps are tossed, the proud graduates are welcomed to present their Stoles of Gratitude to someone who provided them with extraordinary help and support throughout their academic journeys. Some students choose to honor their parents or kids, while others give their stole to a mentor who has provided them with wisdom and support. The Rasmussen College tradition started in the Twin Cities in 2013 and has since then extended to all campuses. The Stole of Gratitude is a lasting symbol of love, appreciation and academic accomplishment at Rasmussen College.

On June 17, Rasmussen College student speaker and recent Law Enforcement graduate, Sara Ross, was able to present her Stole of Gratitude to her husband, Bob. Like many other graduates that day, Ross felt she wouldn’t have made it to graduation without the support of her family, friends and mentors. In fact, Ross had 13 loved ones cheering her on at the Rasmussen College Commencement Ceremony. Ross said having her family at graduation, “means the world to me; they’ve been there to support me all through this, and it’s a celebration not only for me, but also a celebration for them.” For Ross, this was not her first college graduation ceremony, but it was the first time she was able to say she followed her whole heart and realized a childhood dream.

In the late 1980s, while preparing to graduate high school, Ross knew she wanted to pursue a career in law enforcement. The field presented many challenges and the fast-paced, ever-changing environment fascinated her. At the time, being a female police officer was uncommon, and her parents were not too keen on her going into the field. Instead of choosing to become a police officer, Ross decided to pursue teaching—another field in which she was both interested and felt she could make an impact. 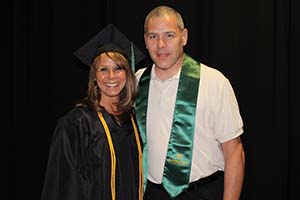 Once setting her mind on teaching, Ross obtained her Bachelor of Science degree in Elementary Education from the University of Wisconsin–River Falls. From there, she set off on her 28-yearlong teaching career. While beginning her career in El Paso, Texas, and eventually returning in 2000 to teach in her home state of Minnesota, Ross advanced her education and received her Master’s degree in Educational Leadership and a K–12 Administrative license. As a dedicated instructor, striving to make an impact, Ross chose to teach in the St. Paul Public School system; primarily in Title I schools, where a majority of students came from low-income families, and many were homeless. “I felt I was making an impact in my classroom during the day, but I only could control what went on within my classroom door,” said Ross. “Police officers can directly impact lives in real and positive ways and can reach a little further than the classroom door, impacting every part of the family and community,” Ross said.

This is when a childhood dream of a career in law enforcement was again ignited in her. As her 18-year-old twins, the youngest of her four children, graduated high school and planned to venture out of the house, Ross’s husband told her it was her time to pursue a degree in law enforcement. Even though some questioned her decision in going back to school and making such a drastic career change at this stage in her life, she knew she would regret it if she didn’t try.

In 2015, with her family’s vote of confidence and while working full time, Ross enrolled in the law enforcement program at the Rasmussen College Blaine Campus. A few of her friends had attended the College and suggested she attend. “Out of all of my experiences with higher education, I have never had as much support and guidance as I did at Rasmussen,” Ross said. The then-47-year-old had never taken online classes before coming to Rasmussen and appreciated the support to make the transition easier. Not only did she receive support from the faculty and staff at Rasmussen, her family really gave her the drive to keep going. “At first, my family didn’t really believe I would do it, but as I progressed along in the program, especially when I hit the Skills portion, it all became more real to them,” Ross said.

After she completed the academic portion of her program, Ross chose to pursue her Law Enforcement Skills Certificate at Rasmussen College, which was necessary for her to obtain a Minnesota police officer licensure. It was during Skills training that Ross needed to lean on her family the most. Skills training incorporates realistic settings, equipment, scenarios and tactics used by law enforcement professionals. It is a strenuous and very physical experience. “The Skills program was the most challenging thing I’ve ever had to do,” she said. Physically fighting and training with people her kids’ ages was, she said, “completely new and challenging.”

While the work was demanding, Ross loved the comradery between her classmates. She was selected by her classmates to be their team leader, which was encouraging for her and a valuable challenge. Her classmates became family as they pushed and supported each other. After teaching students for so many years, her natural leadership and command made her a good fit for this role. 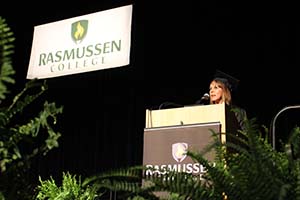 After juggling her career, her family and making it through her coursework and Skills program, a feat she wasn’t sure she could accomplish, Ross was on her way to graduation. Although she had been a graduate at multiple graduation ceremonies in the past, for the first time, she was graduating in a field outside of education. Due to her strong work ethic and tireless dedication to pursuing her dreams, Ross was asked to give the commencement speech at the June 17 graduation ceremony.

Just a few weeks after her 21-year-old daughter also gave her commencement speech at her graduation from the University of Minnesota–Rochester, Ross graced the Roy Wilkins Auditorium stage to share her message of fearlessness and the pursuit of dreams.

As soon as the speeches were over and the graduates filed out, Ross’ family, filled with love and pride, surrounded her in a big hug. She took off the green Stole of Gratitude hanging from her neck and draped it over the shoulders of her husband, who has, Ross says, “made a lot of sacrifices …. This was my fourth time going back to school, and he has been through a lot on this journey.” She continues, “He’s never complained and he has always been so supportive of me.” Sharing of the Stole of Gratitude was the final piece of this academic journey for Ross, and is now on to the next chapter. She says, “graduating is so affirming; I did that!”