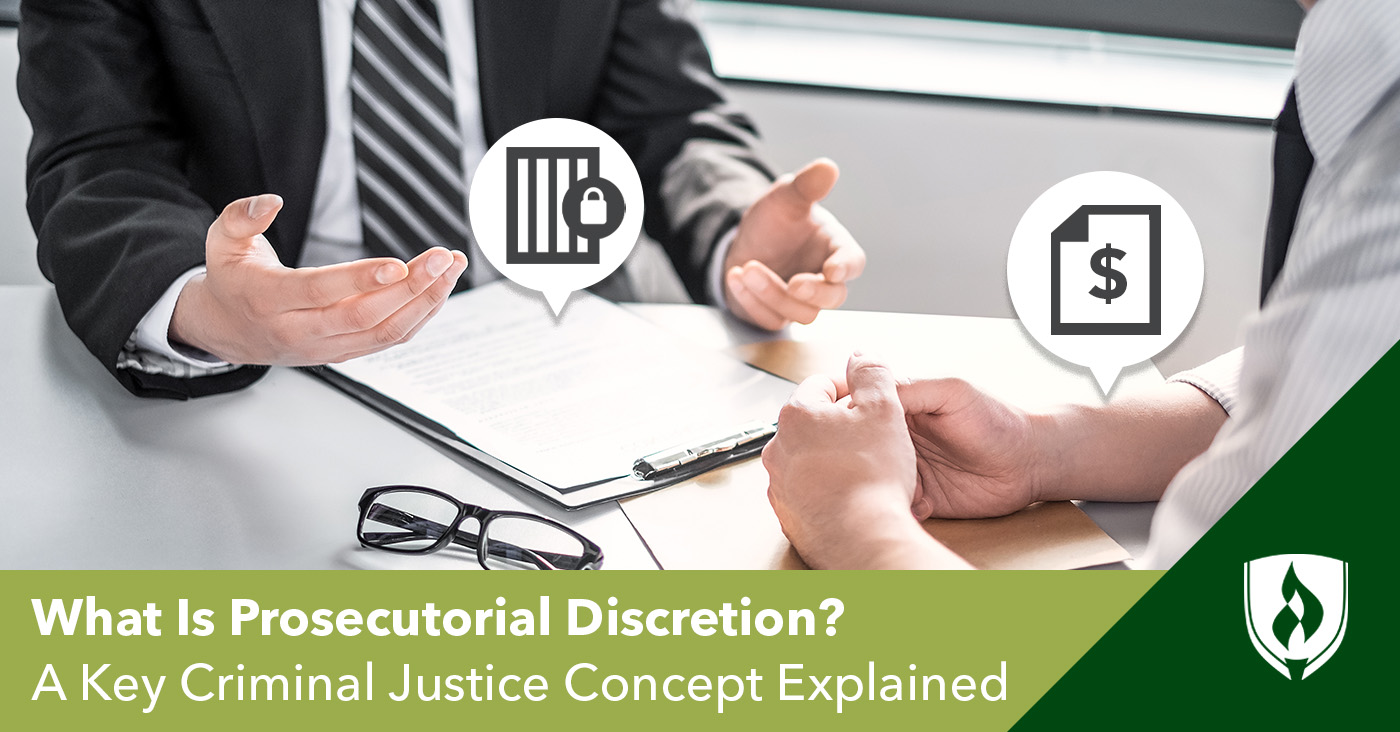 If you’ve ever been watching a crime drama on TV, you’ve probably heard the term “plea bargain” used. Usually, this is where the actor playing the district attorney, faced with a setback in their case, does a quick back-and-forth exchange with the defense attorney in the hopes they’ll agree to a guilty plea on a lesser charge. The snappy lawyer dialogue about these potentially high-stakes scenarios—“I’ll give you manslaughter, with 18 months’ probation”—definitely adds swagger to the proceedings and amps up the thrill factor for the viewer.

But what you may not realize is that plea bargaining is just the most visible offshoot of a very old and established legal concept called prosecutorial discretion. Prosecutorial discretion is what makes these kinds of deals possible and even preferable in some circumstances, but many have never heard of it.

That’s why we asked legal experts to give us the background on this very powerful authority in the hands of federal, state and district prosecutors across the United States. Read on for an in-depth look at where this concept came from and how it’s typically applied in legal proceedings.

What is prosecutorial discretion?

Prosecutorial discretion is the power of the government to decide a course of action when weighing the circumstances of an event that may result in a criminal prosecution. This authority is in play from the moment a prosecuting attorney is asked to make an official criminal charge to the final sentencing.

The underlying value of prosecutorial discretion lies in the reason for justice systems themselves.

“Prosecutors have a duty to seek justice,” says Lauren Blair, an attorney at Free Advice. “With that duty comes the authority to bring criminal charges. Prosecutors are not required to seek criminal prosecution if justice would not be served.”

Blair explains that this concept is related to the power of pardons, which we most commonly see coming from the Executive branch of the government.

“The rationale behind a pardon was that it was necessary to make exceptions for cases where punishment for the offense would offend the notion of justice,” Blair adds.

An additional motivation for this powerful tool is due to the practical limits of any justice system.

“Prosecutorial discretion came to be out of practical and financial necessity,” says Matthew Carter, an attorney at Inc and Go. “Laws are broken every day and governments don’t have the time or money to prosecute everyone. A good district attorney has to make the decision about which crimes need more attention.”

Prosecutors and the law enforcement agencies they work with have finite resources. This means sometimes relatively minor infractions that, while still illegal by statute, are deprioritized in favor of pursuing violators of more serious crimes.

When is prosecutorial discretion commonly applied?

According to Nathan Williams, an attorney at the Law Offices of Nathan S. Williams, prosecutorial discretion comes into play when law enforcement presents evidence of a crime to the prosecuting attorneys.

“Prosecutorial discretion is inherent in every step of the prosecution process,” Williams says, with the examples of issuing subpoenas, search warrants or conducting interviews. But the charging stage is the most recognizable part of the process.

“Each charging decision involves weighing the facts of a case, the law of a case and making a decision about the appropriate charge,” Williams explains. “At that point, deciding between several potential charges involves discretion, and that decision is tremendous. The decision to not charge [is] an exercise of discretion that is far less visible than post-charging decisions to reduce or dismiss charges. The most visible exercise of discretion though is in case resolutions, where prosecutors reduce charges, dismiss charges or come to sentencing agreements in an effort to obtain the optimal result.”

Prosecutorial discretion allows a society to be responsive to what types of disputes and crimes require the most attention.

Carter offers an example of a petty theft case and a child abuse case.

“If you have one trial team available and one trial coming up for petty theft and one trial for child abuse, any rational district attorney will plead out or dismiss the theft charges and focus on the child abuse charges.”

Similarly, a prosecutor could forgo a minor drug possession charge with the hope of making a case against a higher-level distributor or preferring to spend resources on other types of crimes.

Carter adds that there are two main instances where prosecutors use their discretionary powers—policy matters and situational matters, offering examples of both.

“A policy decision might be to overlook minor drug possession charges because those crimes are taking up resources that are needed by an organized crime unit,” Carter says. “Situationally, an attorney might decide to drop charges in a case because the evidence they have is weak, or there is a high chance of jury nullification, i.e., the jury probably wouldn’t convict this particular person because she is a 90-year-old great-grandmother.”

“I see this quite a bit with respect to charges involving minor drug use, theft and prostitution, where a case is dismissed, or significantly reduced, to the benefit of a segment of society that the prosecutors believe have been targeted; namely, the young, poor, minorities and women,” Gutheinz reports.

Compassionate reasons often involve the full background situation of the defendant, as well.

“For example, a female who attacks a spouse with a history of abusing her is a case where the charges may be dismissed, though probable cause exists to prove up the charge,” Gutheinz adds.

What are some of the drawbacks of prosecutorial discretion?

The main drawback of this powerful tool is that it’s in the hands of human beings who are susceptible to mistakes, corrupt motives and poor judgment.

“One of the most troubling drawbacks of prosecutorial discretion is that it is used discriminatorily,” says Blair. “Prosecutorial discretion has been used to give favorable treatment to certain groups of people. Statistics show that Black and brown people are charged significantly more than white counterparts arrested for the same crime. The statistics bear out similar trends for poor versus middle and upper-class people.”

Victims of crimes can also be negatively impacted by prosecutorial decisions not to charge or to bring lesser charges.

“It may serve to reward the wrongdoer at the expense of the victim,” says Gutheinz. “For example, when a prosecutor elects to dismiss a case against a shoplifter because the shoplifter is poor, the store owner may feel victimized once again, but this time by the state.”

For Williams, prosecutorial integrity is crucial, as this power is so potent.

“Improper factors can creep into the analysis, such as familiarity with defense counsel, image concerns and fear of losing, implicit bias as well as the effect a case can have on a prosecutor’s career,” Williams explains.

Laws are complex and constantly shifting to keep pace with all of the changes that arise in our society. People who can make sense of this system will always be necessary when it comes to creating a fair and just world. If you find yourself wanting to know more about our legal system and how it functions, Criminal Justice or Paralegal programs may be good educational options to explore.

If you’re fascinated by the inner workings of the law but aren’t sure about becoming an attorney, read our article “6 Overlooked Legal Careers When You Don’t Want to Become a Lawyer.” 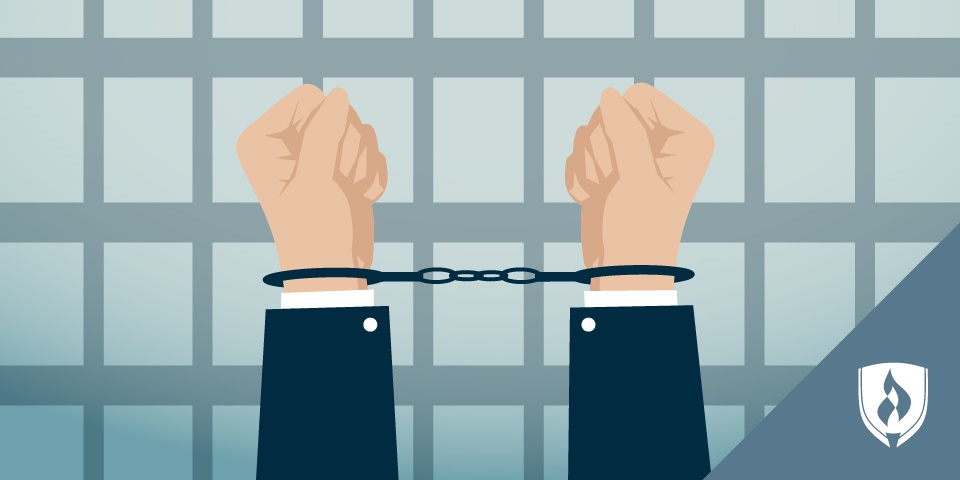