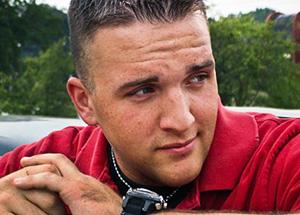 Jake Johnson remembers running around as a kid playing with police toys, trying to stop the “bad guys” from carrying out their latest diabolical scheme.

He most likely never thought much about making it into a career at the time, but as an adult Johnson has dedicated his life to stopping the “bad guys”—both in military service and now as a police officer.

This is the story of how Johnson pursued his boyhood dream and how Rasmussen College and his time in the military helped him reach it.

Johnson continued to pursue his interest in law enforcement by taking part in a police explorers program when he was 14. Unlike some of the other kids in the program, Johnson says he wasn’t deterred by the less-than-glamorous realities of police work.

“The strange thing is, when we started getting into case [files] and things like that, I still wanted to do it,” Johnson says. “A lot of the other people saw the paperwork side of police work for the first time and lost their interest.”

Johnson spent a year at Eastern Kentucky University after graduating high school, but found life at a large state university wasn’t for him and decided to pull out of school. Johnson’s father, a 13-year veteran of the U.S. Air Force, encouraged him to join the Air Force officer program. But the officer track didn't resonate with him so instead he joined the rest of the enlisted "grunts."

“In the military, if a guy takes over a building with a rocket launcher and a pogo stick, there’s a checklist somewhere with what you need to do,” Johnson says. “But when you’re out you realize there’s no list and no one to give you orders—it’s up to you to figure it out.”

Johnson says becoming a police officer or a member of the military isn’t something you can say for certain that you want to do before joining, as you probably don’t really know what it’s like to be under fire or jumping from planes. The motivation for enlisting in the military, however, is similar to the motivation he had for becoming a police officer.

“It’s something you end up doing because you see it as a calling, not because you ‘know’ it’s what you want,” Johnson says.

Returning home (and to college)

Johnson spent 2007 to 2011 in the Air Force, including one tour of duty in Afghanistan, before returning home to be with his family in Wisconsin. He decided that the best next step for him would be returning to school, especially when considering the tuition-related benefits provided to him by the post-9/11 G.I. Bill.

Johnson wanted to attend a school close to home, especially after spending so much time away from his family. Rasmussen College caught his eye when researching schools in the area so he contacted the campus to find out more. He was taken aback by the professionalism of the staff and how he wasn’t treated like just a number. He also enjoyed the option of taking classes online as well as the shorter quarterly format of the courses—something that he says allowed him to learn a subject without it becoming stale.

Johnson found his fit in Rasmussen College, but still struggled with transitioning back to civilian life. He says it definitely took some time to adjust to the freedom available to him after years of following orders.

“In the military, if a guy takes over a building with a rocket launcher and a pogo stick, there’s a checklist somewhere with what you need to do,” Johnson says. “But when you’re out you realize there’s no list and no one to give you orders—it’s up to you to figure it out.”

Johnson considers himself lucky, as the adjustments he had to make upon his return were relatively small compared to other veterans who may be dealing with injuries or severe PTSD. His work ethic from the military was one place he didn’t have to make any changes.

“I was shocked with just how easy it was for me to sit down and do my work,” Johnson says. “I think a lot of that comes from the military getting me used to taking orders and carrying them out.”

Johnson graduated from Rasmussen College’s Appleton, Wis., campus with an Degree in Criminal Justice in 2012, and is working as a police officer in Arkansas. He says his experience in the military has “absolutely” prepared him mentally for the stress that comes with police work. Johnson says that while police work is only dangerous if you don’t follow the procedures from your training, the impact of stressful situations is very real.

“The first time you see something like a dead person or a bad car wreck, it hits you like a ton of bricks. Having a military background prepared me to deal with stressful situations like that,” Johnson says.

Johnson says although his life experiences have helped him maintain composure in difficult situations, the real eye opener for him was seeing how much those situations can rattle his fellow officers, despite their best efforts to appear calm.

“Growing up, I always thought of police officers as kind of like superheroes,” Johnson says. “What shocked me as an officer was just how fragile and human we all really are. We don’t show it but when we get back from a bad call its clear how much it affects us.”

Police work isn’t all about dealing with tough situations, though. Johnson says a big part of his work is visiting with kids in the community and setting a positive example so they know the police are there to help. The outreach will hopefully pay off for Johnson in the future, as he works toward becoming part of the criminal investigations unit.

If you’ve recently finished up in the military and are thinking about pursuing a career in criminal justice, Johnson recommends you take advantage of the benefits that are offered to you.

“You’d be dumb not to use your educational benefits,” Johnson says. “Even if you decide you don’t want to go to school, at least transfer them over to someone in your family. Don’t let [them] go to waste.” Johnson says that while his military experience helped him succeed in becoming a police officer, it doesn’t necessarily guarantee success for all veterans. It will still take hard work and dedication to become a police officer, but the nature of your training will certainly give you a head start.