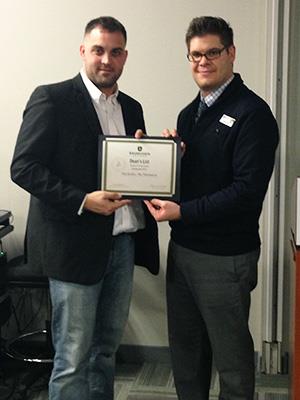 McNamara attended college in brief spurts with varying levels of success before and after his time in the Marine Corps but he never seemed to find a school that addressed his needs… until now. The journey to Rasmussen College for McNamara held several twists that were admittedly frustrating, but now that he’s enrolled he is relieved to have found a home.

“Rasmussen has been incredible,” McNamara says. “It’s set up for somebody that has a life [outside school]. Everywhere else I went it seemed like they expected college to be your life and nothing else.”

McNamara was never too interested in school while growing up—his biggest motivator for keeping up in school work was maintaining the minimum grade point average to continue participating on his high school wrestling team. His interest in wrestling brought him to Dakota County Technical College where he’d be able to be part of their college team. At the time, McNamara’s desire to attend college just wasn’t there.

“I didn’t believe in education and thought it was stupid, to be honest,” McNamara says. “I pretty much went to school because my parents told me to.”

That lack of interest resulted in McNamara dropping out and subsequently losing what direction he had in his life. He decided his next step was to sign up for the U.S. Marine Corps. His motivation to join was two-fold: First, to honor a friend who had been killed in Iraq in 2004; and second, a lack of better options.

“I felt I needed to do something to make ends meet so I headed to the recruiting station and since it was a time of war I was shipping off to California within a week,” McNamara says. “If I would have had any more time to think about it I don’t know if I would have gone through with it.”

“Being told that that a 22-year-old with a bachelor’s degree was more qualified to be a leader really turned me off to education at the time.”

The decision to enlist has had a positive impact on McNamara, regardless of how quickly it came. McNamara says the high standards of the military have set the bar for his everyday life.

“The expectation in the Marines is that if you’re going to do something, you’re going to be the very best at it,” McNamara says. “They definitely instilled [in] me the work ethic needed to make school work easy to complete.”

McNamara earned the rank of Sergeant over four tours of duty spanning from 2005 to 2011. He thought he would be able to walk into a career outside of the military based on his stellar military service.

He was in for a rude awakening.

Transition from military to Rasmussen College

Despite his personal development, distinguished leadership experience and service to his country, McNamara’s luck finding a job without a degree was mixed. Some of the recruiters he talked to considered him a trained “trigger-puller” and weren’t convinced of his ability to do anything that didn’t include camouflage and tactical gear.

“Being told that that a 22-year-old with a bachelor’s degree was more qualified to be a leader really turned me off to education at the time,” McNamara says.

McNamara finally found work when he was approached to run a large pawn shop. He says he was promised the opportunity to earn a steady wage plus commission that could result in six-figure earnings. Things didn’t really work out the way he’d been promised and after a year he got fed up and left the position.

Once again, McNamara was at a crossroads.

He decided to return to school, this time at Anoka Ramsey Community College. But he knew almost immediately that it wasn’t going to be a fit.

“It seemed like everyone there was kind of a punk teenager,” McNamara says. “I didn’t really fit in there and it just wasn’t very veteran-friendly.”

So McNamara left Anoka Ramsey and decided to check out the criminal justice program at Rasmussen College’s Blaine campus upon the urging of his brother-in-law. McNamara says the structure of Rasmussen College helped ease the transition from Marine to student.

“In the Marines you get used to having someone tell you what to do, where to go and how to do it,” McNamara says. “The way the advisors here sat me down and basically told me everything I needed to do made it simple for me.”

That simplicity combined with the work ethic he developed in the military has paid off for McNamara—for the first time in his life he made the honor roll and dean’s list. He’s now done it every quarter since starting in May 2013.

He agrees he’s come a long way since skating by just to stay eligible for wrestling. Part of that personal growth comes from his experiences in school and the military and part comes from his pregnant wife.

“Whenever I start acting like a cocky Marine or wrestler she does a great job of keeping me grounded,” McNamara says. “She’s attending nursing school right now and when I think about what I did in the Marine Corps I realize she works harder than I ever did.”

Plans for future in law enforcement

McNamara assumed his military training would make learning how to become a police officer a “cakewalk.” But now that he has started his coursework, McNamara admits there’s much more to police work than he expected.

“Criminal justice is more in depth than I realized,” McNamara says. “In the Marines you’re taught skills like profiling and situational awareness but they’re applied differently—the military is proactive while law enforcement is reactive.”

McNamara says that although law enforcement and the military have a similar rank structure the through processes and goals are very different. Getting used to those differences is a challenge, but not impossible.

McNamara, who is on track to graduate with a bachelor’s degree in 2015, hopes to eventually work for the Drug Enforcement Agency (DEA)—something his uncle has done for 30 years. If the DEA is still furloughed and not accepting applications for new hires by the time he graduates he has a back-up plan to pursue a master’s degree in a specialization like anti-terrorism tactics.

For now, McNamara will focus on earning his degree and the rest should fall into place. The blend of military and law enforcement training should make him a desirable candidate for a variety of agencies, even if his dream job doesn’t open up.

Looking for your next step after the military?

Check out these 10 facts you didn't know about the Rasmussen College Justice Studies Program!