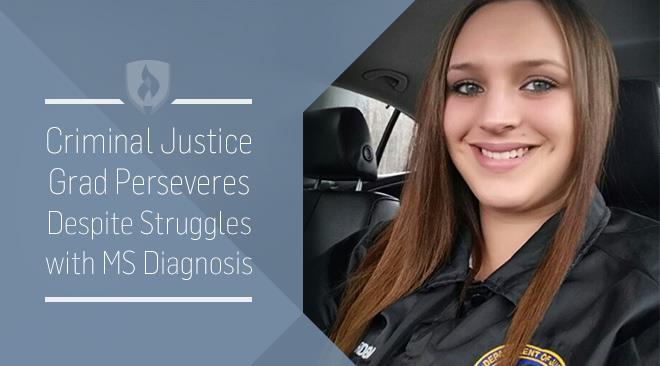 Rasmussen College criminal justice graduate Theresa Barden is living proof that even though life may throw you a curveball, perseverance in the face of adversity does pay off.

Barden was diagnosed with multiple sclerosis (MS)—a disease that attacks the central nervous system—in February 2012. This diagnosis came just one month before she was set to graduate with her associate degree in criminal justice from the Rasmussen College Blaine campus. At that time, she had to decide whether she was going to take time off from school, quit altogether or continue as planned.

Focusing on the positive

Many questions ran through Barden’s mind as she lay in her hospital bed. As she weighed her options, she ultimately formed a positive outlook about her diagnosis.

"All I know is I am ready for whatever comes my way."

Rather than be dragged down by her MS diagnosis, she decided to persevere. She picked up her laptop and finished her finals from her hospital bed – and graduated with honors! “I figured if I was going to live the rest of my life with this disease, I at least had to get a head start and educate myself for my future and ultimately, my family’s future,” Barden says.

Going above and beyond

“I love my job so far,” Barden says. “I learn new things every day … any job in corrections is interesting, to say the least.”

In her career, Barden says she wants to be the person that anyone can go to and say that she helped them in some form. She has always held leadership roles in some form during her life, and she believes in the power of education. She aims to instill those same values in her children and anyone else looking to further their education.

“Maybe I will be a lieutenant at one of the federal institutions across the country one day,” she says. “All I know is I am ready for whatever comes my way.”

On a personal note, Barden’s goals are to remain close with family, give her children a great upbringing and thrive at whatever she does. She remains active in her community and was selected as one of four Twin Cities natives to be an ambassador at Walk MS: Twin Cities on May 1, 2016, in Minneapolis. As an ambassador, Barden was able to share her story with more than 4,500 people, as well as promote and fundraise for the event.

Follow our School of Justice Studies Blog to keep tabs on more student stories and other hot topics in the industry!