Breaking Down the Different Types of Prisons in America 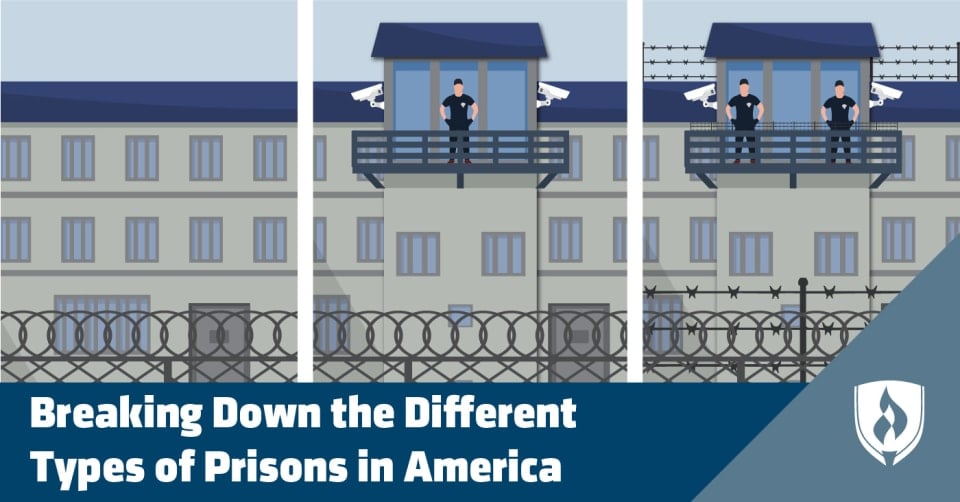 The criminal justice system has always caught your interest. Every time you watch a TV crime or courtroom drama, you can’t help but wonder what happens after the judge gives the final verdict. Where do convicted offenders end up? Is prison really like how it’s portrayed on TV?

Many people think the terms “prison” and “jail” mean the same thing, but they actually refer to two very different aspects of the criminal justice system. It will be helpful to understand the difference before we dive further into the types of prisons in America.

The Bureau of Justice Statistics (BJS) explains that jails are only used to hold inmates for a relatively short period of time, usually while they await their trial or sentencing.1 Some inmates who have committed a misdemeanor and been given a short sentence of one year or less may also serve their time in jail.

Prisons are long-term facilities designed to hold inmates serving sentences of more than a year. They also house inmates who have committed more serious crimes, like felonies. One more key difference: jails are operated by local governments, such as cities or counties. Prisons, on the other hand, are run by the state or federal government.

Now that the topic of prisons versus jails is clarified, keep reading to gain an understanding of the different types of prisons in America.

State prisons house offenders who have committed state crimes, such as assault, arson, robbery or homicide. Each state has its own unique legislation regarding the prison system, and the differences from state to state can be vast. States differ in their stances on capital punishment, the percentages of offenders released on probation and the racial makeup of their prison populations.

Inmates held in federal prisons have been charged with federal crimes, such as drug trafficking, identity theft, tax fraud or child pornography. There are 122 federal prisons throughout the U.S., housing more than 151,000 inmates, according to the Federal Bureau of Prisons (BOP).2 Many different factors are considered when determining which prison an offender will be assigned to, including their offense and past criminal record, mental and physical health, and proximity to family.

Federal prisons can be one of five levels of security, with each level designed to best meet the needs of its inmates.

These prisons, sometimes called Federal Prison Camps (FPCs), have the lowest level of security and are used to house non-violent offenders with a relatively clean record. Some think FPCs resemble college campuses more than prisons since they offer little-to-no perimeter fencing and prisoners are housed in dorm-style units. FPCs typically offer work programs and classes to rehabilitate inmates, who are sometimes allowed to work off-site.

Low-security facilities still have a strong orientation toward inmate work programs, but they also have perimeter fencing and a higher staff-to-inmate ratio than FPCs. Some of these prisoners may have a history of violence, but they must have less than 20 years left on their sentence to be placed in a low-security facility.

Medium-security federal correctional institutions (FCIs) are much more likely to have violent offenders as inmates. This is the security level that moves to cell-based housing, more rigorous treatment programs and perimeter fencing that often includes razor wire with electronic detection systems.

High-security prisons are also called United States Penitentiaries (USPs). As you might imagine, they provide the highest level of security, where inmates are closely monitored by guards and cameras. USPs are surrounded by razor-wire fencing or walls, and most also have watch towers.

This special class of prison encompasses other types of institutions designed to house inmates with special considerations, such as those who are chronically ill, extremely dangerous or a high-escape risk. The administrative level includes the Administrative Maximum Security Penitentiary (ADX), which is the nation’s only “supermax” prison. ADX provides extreme security for the country’s most dangerous offenders, where prisoners spend most of their time in their cells and are under 24-hour supervision.

Sometimes more prison capacity is needed than what the government can offer. In these cases, local, state and federal governments will contract with a private, for-profit firm to operate a prison on their behalf. The BOP reports that about 11 percent of inmates are currently held in private correctional institutions.2

The privatization of prisons has been up for debate in recent years. Opponents fear that private prisons, which are typically paid a set amount per inmate, have incentive to keep inmates imprisoned and reduce rehabilitation resources. Supporters view private prisons as an affordable corrections option for states with stretched budgets.

These “youth prisons” are operated by states and are used to house and rehabilitate offenders under the age of 18. Inmates can be sentenced to juvenile detention for a variety of reasons, including truancy, property crimes, drug-related offenses and violence.

Inside the criminal justice system

Now that you have the facts about the different types of prisons in the U.S. and how they operate, you might be wondering what it’s like to work in these various correctional institutions. Get the full scoop in our article, “What Is a Correctional Officer? A Look at Life as a Jailer.”