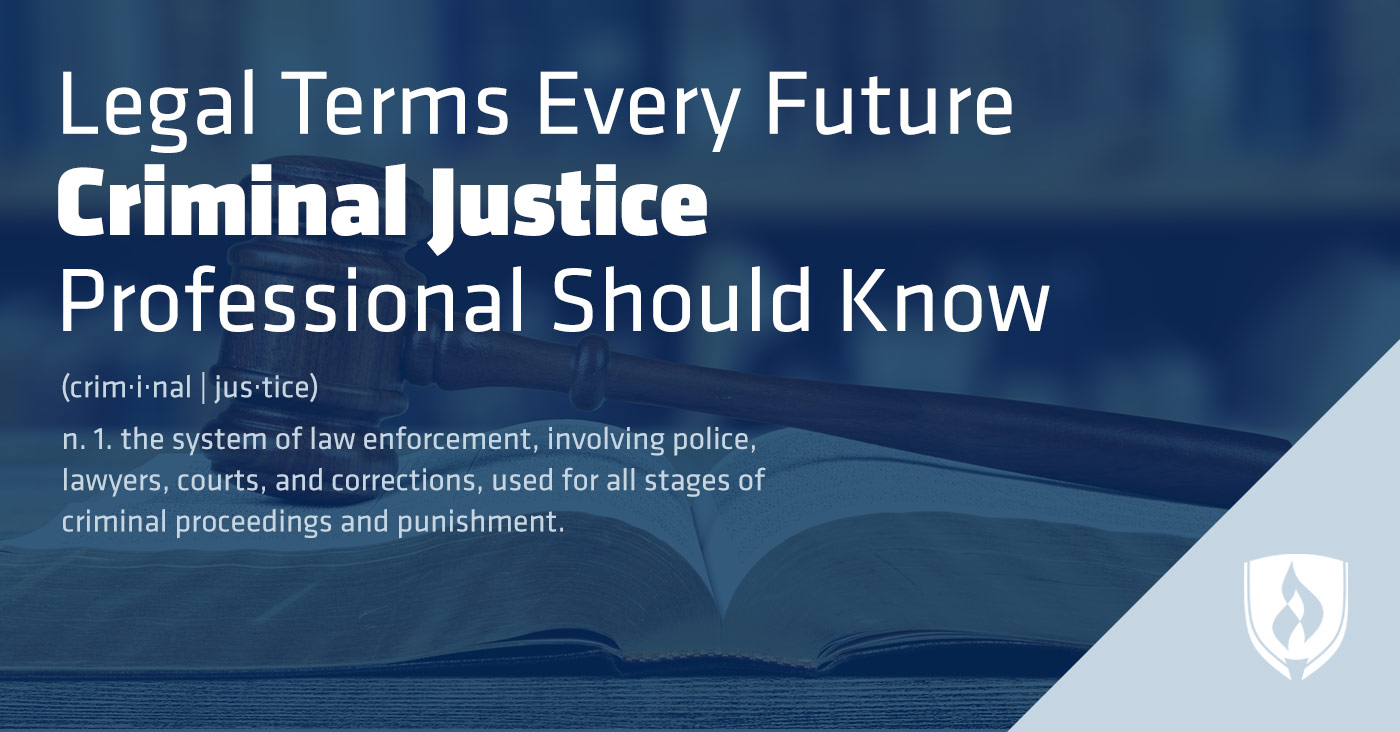 Habeas corpus. Subpoena. Modus operandi. Law can seem like an ongoing Latin class, with terminology that goes over many people’s heads. While you don’t want to have to open a textbook every time you watch your favorite true crime TV shows, you also want to be knowledgeable and educated in the basics of “legalese” so you can fully understand what’s going on.

We’re here to help. We rounded up some of the most common legal terms used by both court professionals and law enforcement, so you can understand two sides of the criminal justice field. So next time you are hours-deep into a Law & Order marathon, you can rest easy knowing you’ve got a solid handle on the legal terminology used throughout the justice system.

An affidavit is a voluntary written statement of fact authorized by a notary or public official. It is a legal statement that can be used in court.

An allegation is any formal accusation, claim or statement about the activities of a person (or organization). An allegation is not necessarily true—they are just a statement of behavior that needs to be verified. For example, you can allege the mailman kicked your dog, but evidence will be needed to prove the allegation.

Acquittal is the term used to certify that the accused is not guilty and free from all charge.

An arraignment is the first instance in which the defendant is presented in court. In an arraignment, the rights of the accused are read, the defendant enters a plea of either guilty or not guilty and bail is set. Arraignments usually occur within 48 hours of an arrest.

A term used in court, a defendant is the person or party who is being accused of a crime. Some jurisdictions may use “accused” instead.

Depositions are used by lawyers to obtain additional information before presenting in court; they are statements made under oath that are recorded by officials such as court reporters.

In cases of extradition, one state or country gives over an individual who has been accused of committing a crime in another state or country. Extradition laws and agreements vary between states and countries.

Expungement occurs when the court orders an arrest or conviction to be erased in the eyes of the law. The conviction may still be accessible to government agencies, but will not be available to the public.

Issues of habeas corpus focus on allowing those who are imprisoned or detained to petition the judiciary for a time to appear in court and challenge the legality of their imprisonment.

An indictment is a formal written accusation of a crime. It can occur before an arrest is made, and is usually for felony charges. Once someone has been indicted, the next course of action is for the individual to be arraigned and brought to court.

Litigation is the process of bringing a case to court. It is a broad term that covers many areas of law.

Perjury is the crime of providing false or misleading statements under oath. It is considered a felony and carries a prison sentence of up to five years.

The prosecutor is the person or party seeking charges against the defendant.

This refers to the damages paid by the defendant as recompense for their crime. They go above and beyond compensatory damages in order to serve as an example or deterrent to others.

A subpoena is a legal notice that a person has to appear before court. Failure to show up in court can result in a charge of contempt.

An accessory to a crime is someone who is present during a crime or may aid and abet a criminal, but does not actually commit the crime. For example, you can be charged as an accessory after the fact if you provide cover for a criminal act by lying to investigators.

An alibi is evidence that a defendant was not at the scene of the crime at the time that the crime occurred. Alibis may be used as defense in court.

Battery is the act of causing harmful or offensive contact with another person. When done with the intent to cause serious harm, it may be known as aggravated battery.

DUI stands for driving under the influence, and DWI is driving while impaired (or intoxicated). The definitions of these vary per state and are sometimes used interchangeably. In some states, tickets can be given even if a person’s blood alcohol limit is under the legal limit—if you fail a sobriety test or show signs of impairment you can be charged.

Extortion is the crime of obtaining something, usually money, through force, damage, threats or coercion. Theft crimes can also be felonies or misdemeanors, depending on the amount of money or value of property extorted.

A felony is a type of crime that is ranked more serious than a misdemeanor. Examples of felonies are murder, arson and kidnapping.

Homicide is a broad term that encompasses any reference of a human killing. It includes murder, manslaughter and justified homicide (such as in self-defense).

Also known as a violation, infractions are lesser offenses that are usually punishable by fines. Examples are speeding tickets and tickets for running through a stop sign.

Larceny is theft without violence. It can be classified as a general theft crime, grand larceny or petty larceny. The penalty for larceny can vary and is often tied to the value of the items stolen—after a certain dollar value threshold is reached, suspects may be accused of the more severe grand larceny charge.

Commonly known as an M.O., this term describes how a particular crime was committed. It does not have to be proven in court at any time. Often this is used for cases where the accused appears to follow a pattern of behavior each time a crime is committed. For example, a thief consistently posing as a utility worker to gain access to multiple houses.

Parole occurs when prisoners are released early and sent to serve the remainder of their sentence in the community.

Probation occurs when convicted offenders are not sent to prison. Instead, they are sent into the community, but are supervised by a probation officer. Those on probation must follow the terms of their probation, which may include community service and counseling, or they may end up facing prison time.

A search warrant is a document signed by a judge or magistrate that allows law enforcement to search a place, thing or person. The warrant must also list the evidence law enforcement are seeking.

This is only a sampling of thousands of legal terms, but learning the basics is a good first step before diving headfirst into the world of criminal justice. If you’re interested in the world of courtroom justice, find out what some common jobs are in our infographic, “Order in the Court! A Visual Guide to Courtroom Jobs.”

If you are leaning more toward the world of law enforcement and criminal catching, check out who’s who on a crime scene in “CSI Simplified: Your Visual Guide to Crime Scene Jobs.”