History is filled with watershed moments.

Those special moments in time that make you remember exactly where you were when something important happened.

For some, it’s the assassination of John F. Kennedy. For others, it’s the explosion of Space Shuttle Challenger. Still others will always remember where they were when the World Trade Center towers fell.

The thing about watershed moments is that they’re often the harbingers of change.

The field of criminal justice has seen a similar evolution.

From Wyatt Earp's shootouts with cowboys to Bobby Kennedy's war on organized crime to the invention of forensic facial reconstruction, there are moments in history that have changed the course of criminal justice forever.

It is only in hindsight that we recognize the importance of these moments. And only through reflection that we appreciate the myriad trails they blazed. 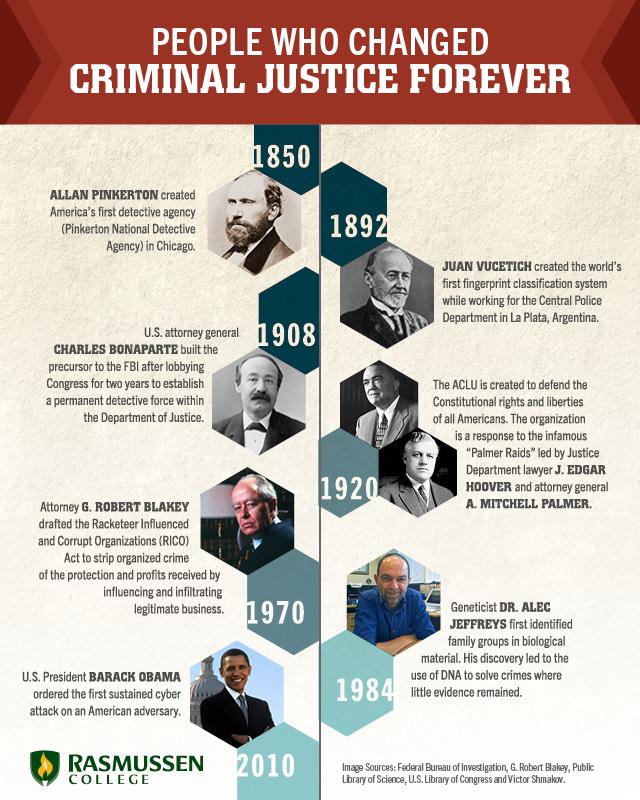 1892: First use of fingerprints to solve a murder

2010: First government-sanctioned use of sustained cyberwarfare

From the FBI and fingerprints to DNA and digital warfare, the basic code of law enforcement – i.e., “to protect and serve” – has changed dramatically. All of the milestones mentioned above have one thing in common: they broke new ground in law enforcement. In doing so, they changed the course of criminal justice forever.

Maybe you’re the next criminal justice genius waiting to happen. Download our Criminal Justice Career Outlook to find your niche!