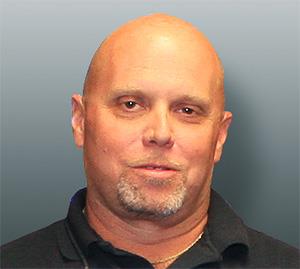 New Port Richey, Fla. Criminal Justice graduate Don Greene spent most of his life helping to build his community, both literally and figuratively.

Green worked for several years in the construction industry, while also volunteering as a youth football coach each fall. While coaching football may not seem like an obvious community-building activity, the relationship he has with his players makes it apparent.

“I say I have three kids, but really with coaching it’s more like 50,” said Greene.

The 2008 economic recession had an adverse effect on the lives of millions of Americans, and Greene was no exception. The recession hit the construction industry particularly hard and this dip in demand led to Greene being laid off from his position as a building supply salesman.

While being laid off is hardly ever a positive experience, it did give Greene the opportunity to evaluate where he was in life and eventually led him to make a career shift into law enforcement. Greene says his wife was a big motivator in that process.

“When we were taking the time to figure out what I was going to do, she said to me, ‘Why not do something that you enjoy, like working with kids?’” said Greene. “I had been a coach for years at that point and had always been interested in law enforcement, so the plan was for me to get my degree, and then try to find work as a juvenile probation officer.”

After learning more about the details of the juvenile probation officer position and how the sheer volume of juveniles he would work with every day wouldn’t allow time for a lot of personal interaction, Greene’s plan has now shifted to becoming a school resource officer. While an economic recession may have been the catalyst for Greene to make a career transition, money wasn’t his main consideration.

“The interaction with people and being able to help in the community is what makes me want this career,” said Greene. “At this point in my life, at 46 years old, I’m not in it for the money. I’m in it for being able to make a positive change in someone’s life.”

Coaching to make a difference

Good coaching leads to strong fundamentals. This is true not only on the football field, but in life as well. Greene has seen firsthand how the commitment to developing his players has led to positive changes in their lives and the community.

“I’ve had troubled kids play for me who just yearn for approval and for someone to tell them they did a good job,” said Greene. “By being there and giving them some of that support I’ve seen these kids change their outlook on everything. They become better students and better people. The satisfaction of seeing that change makes it all worth it.”

Greene now has former players that he welcomes into his home like family; they often stop at his house for dinner and group study sessions.

However, with Greene in the midst of earning his certification from a local police academy, the tables have turned a bit for the coach; instead of him providing others orders, they are being told to him.

“I get a little excited when I coach,” Greene said. “So now after talking about the physical training I have to do in the academy [to my players], one of [them] that comes by regularly tells me, ‘Coach, I would love to see you getting yelled at while having to do push-ups and having to run when you mess up.’”

A family of students

It’s not often you see every member of a family attending school, but Greene’s family proves to be the exception. Between Greene, his wife (who also attends Rasmussen College) and his three kids, it’s almost a certainty that someone in the family will be doing homework at night. Greene says the entire family being involved academically has been a big help in keeping him motivated, particularly his wife.

“I always say to [my wife] that her name should be on my degree too, with the amount of effort she puts into helping me study and making sure I’m keeping up with my work,” said Greene. “I never would have made it through without her.”

“I haven’t been enrolled at Rasmussen [College] for a while now, and I still talk to my instructors pretty regularly,” Greene said. “One of the best things about Rasmussen College having small classes is that you got to know your instructors and they get to know you. It felt like a one on one education, even though it really wasn’t.”

Though he would prefer to eventually work as a school resource officer, Greene knows he will likely have to spend time serving as a patrol officer. Greene’s current goal is to finish his academy training and find a law enforcement position within the community he has helped to build. Even if Greene’s plans change and he never ends up becoming a school resource officer, he plans to continue coaching and providing support to the kids in his community.