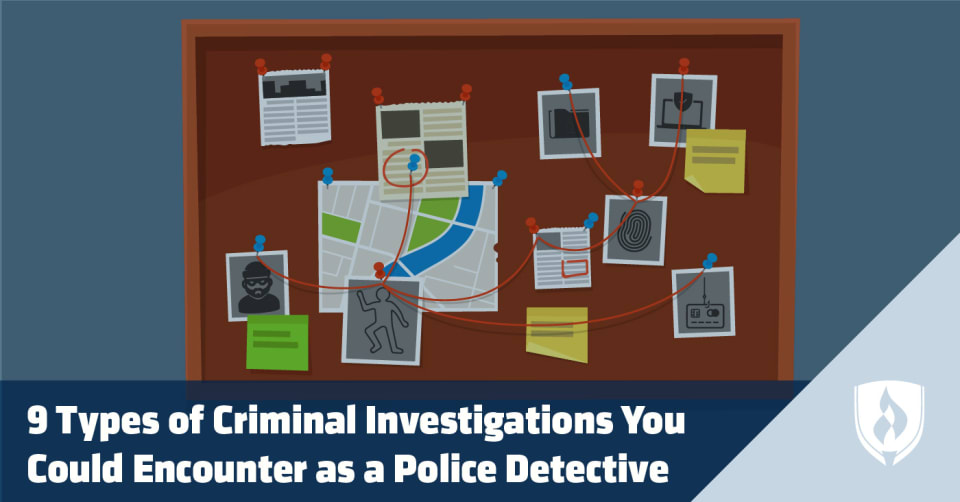 You’re intrigued by the investigative work of detectives, whether it’s the fictional crimes solved by Sherlock Holmes or the real-life police work featured on your favorite true crime podcasts. Detectives investigate crimes big and small, from theft to murder. With such a broad range, you can imagine that no day on the job is boring!

However, you often wonder whether you have the right idea about the types of crimes a detective might investigate. Is it realistic that the same detective who busted a drug dealer last week is hunting down a serial killer today? Or is this work typically divided up and given to detectives with specialized expertise?

You’re considering a career in law enforcement with hopes of someday working as a police detective, but you can’t move forward until you get to the bottom of what this job is really like. Read on to learn more about the types of criminal investigations detectives could encounter as a real-life detective.

Although whodunit cases in the fictional world often have detectives responsible for all sorts of investigations, detectives in the real world are much more likely to specialize—especially if their department is in a big city.

Regardless of the level of specialization a department has, this list of 9 types of criminal investigations will give you some insight into life as a police detective.

Detectives in the homicide unit are responsible for investigating the killing of one person by another. They typically begin their investigation by assessing the scene of the incident, including collecting evidence, dusting for fingerprints, photographing the scene and exploring the surrounding area for potential witnesses to interview. Homicide detectives must be skilled at interviewing both witnesses and suspects to gather as much information as possible—this is challenging even with a willing witness, let alone one who is reluctant to speak out.

Many of the crimes that occur in the real world can also, unfortunately, take place online. These cybercrimes include identity theft, illegal firearms sales, online drug trafficking and online harassment. Cybercrimes can be tricky to investigate because they often take place across different jurisdictions, and their perpetrators can hide in anonymity behind their computer screens. Despite these challenges, these tech-savvy sleuths use technical analysis and electronic evidence to uncover the truth and bring justice for victims.

Many different types of crimes are investigated using forensics. The police detectives in this special unit scientifically analyze evidence from crime scenes to piece together the truth about what happened and who committed the crime. They work with DNA evidence such as hair or bodily fluids to help identify or eliminate possible suspects, and they use methods like ballistics examination and soil analysis to recreate the scene of the crime.

Fraud occurs when someone intentionally uses false information to scam a person or company, usually for financial gain. There are many different types of fraud, and detectives are needed to investigate all of them, including insurance fraud, identity theft, credit card fraud and forgery.

Detectives use their sleuthing skills to gather evidence proving that fraud has occurred and following a paper trail that leads to the culprit.

Detectives in this unit specialize in any investigation related to domestic abuse, sexual assault and child abuse or neglect. These detectives interview victims and witnesses and gather forensic evidence to make a case against the perpetrator. These detectives often receive special training to help them assist victims in these complex cases, especially when violence or abuse has occurred between family members. Detectives involved with these investigations may also partner with other organizations that offer support to victims, such as social workers, counselors and safe houses for women and children.

This is a broad category that includes investigations of burglary, theft and vandalism. Detectives in crimes against property cases may not have many leads to help them, especially in situations where there were no witnesses. These detectives rely on gathering detailed reports from the property owner, sharp observation of evidence and canvassing the area to see whether anyone saw suspicious activity.

No detective wants to see a case go unsolved. Some detectives dedicate their work to these cold cases, reviewing past evidence, searching for new clues and using updated forensics technology so that justice can hopefully be served no matter how much time has passed. Cold cases that are reopened for investigation are often related to violent crimes like assault or homicide.

Narcotics detectives are responsible for investigating drug-related crimes. This includes smuggling, sales, the growing or production of drugs, and even the use of fraud to obtain prescription drugs illegally. These detectives may work undercover to break up a drug trafficking ring, or they may work on a smaller scale in order to curtail drug use in a particular neighborhood.

These detectives focus on ending violence between gangs in a particular city. Some of their investigations may overlap with narcotics cases, while others involve investigating offenders in gang-related crimes. Their goal is to promote safer neighborhoods and end violence, so some of their work is preventative, such as removing illegal firearms from the streets or patrolling areas that are known for violence.

Take a closer look at your future

Now you’ve got the scoop on the types of criminal investigations you could encounter as a police detective. But before you begin your career as the next Columbo, you need the proper training and education.

Detective positions are typically only available to police officers who have gained experience and proven themselves on the force—and some police departments may prefer candidates with a college degree. Learn more about earning a Criminal Justice degree at Rasmussen University with our article “9 Things You Didn’t Know About the Rasmussen University School of Justice Studies.”