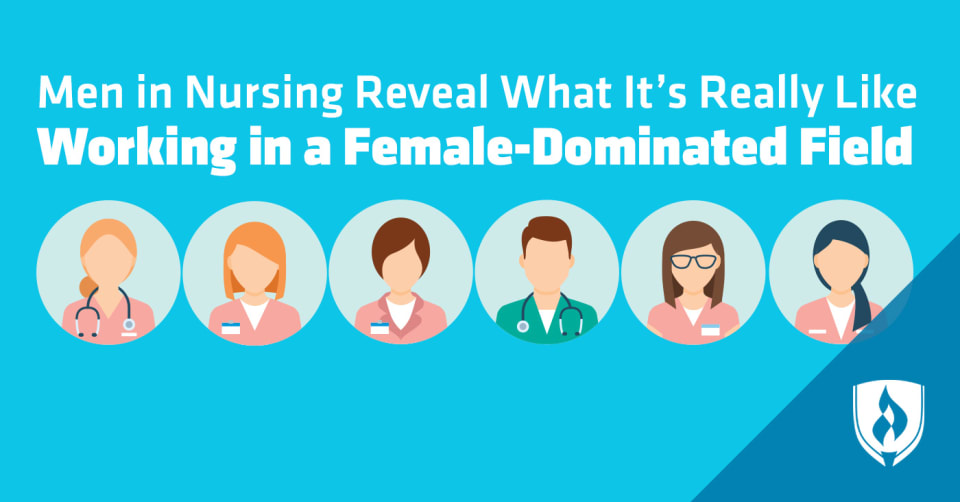 It's no secret that the nursing field has traditionally been the domain of women. But lately attitudes have changed, and more and more men are joining the nursing workforce. In fact, the proportion of male registered nurses has more than tripled, growing from 2.7 percent in 1970 to 9.6 percent, as of 2013. The amount of men working as LPNs and LVNs has more than doubled as well—from 1.8 percent in 1970 to 4.3 percent in 2013.*

With this information, you’re probably wondering: Why are more men being drawn to this still-female-dominated profession? Are there any unique challenges or benefits that come with being a male nurse?

To help answer that, we’ve enlisted several men in nursing to share their experiences—and while there may be some small differences, their overall experiences as male nurses have been overwhelmingly positive.

“I only wish I went into nursing for my first career,” says Matt Thomson of The RN Mentor and an ICU nurse.

Keep reading to hear what more men have to say about their experiences in the nursing field, as well as any advice they have to the future generation of men in nursing.

Why should men consider becoming nurses?

The short answer is this: The nursing field benefits from diversity. Men in the field are able to provide a different perspective and help make some patients feel more comfortable. People from all walks of life and backgrounds need nursing care, and ideally, the people administering that care are essentially a mirror of the people they serve.

So what drew these male nurses to the field? One of the most appealing draws to becoming a nurse—having the opportunity to make a difference with patients in a one-on-one setting—is universal and knows no gender boundaries. This ability to help people on a personal level caught the attention of Luis Enrique Ceniceros, RN-BSN. Ceniceros first started in healthcare as a certified nursing assistant (CNA), and was inspired by his nurse coworkers. He says in that role, he saw how the “Smallest action of kindness, love and care could completely change [a patient’s] outlook for the rest of the day.”

Raymond Leal, another RN-BSN, says his motivations for choosing nursing were similar—he always loved working with people and wanted to continue to work closely with those in need.

Thomson says he knew he wanted to go into the health sciences field in some capacity, and was especially drawn to the flexible schedule that nursing provides. That flexible scheduling allowed Thomson and his wife–who is also a nurse–to work three (long) days per week and then go on trips to explore the world. After having a child, they have used their flexible schedule to spend time at home. But it’s not just the flexibility that kept Thomson feeling fulfilled. He says he appreciates being able to help patients through what is often one of their worst days, while also being rewarded with a lifestyle he enjoys.

Others nurses were drawn to the challenging nature of the work itself. Nick Angelis, CRNA and author of How to Succeed in Anesthesia School (And RN, PA, or Med School) liked subjects like Communications and Science and found that Nursing offered an intriguing blend of both.

You’re probably wondering if your career will be more difficult as a male nurse. The good news is that navigating a nursing career is, for the most part, pretty uniform. But that doesn’t mean there aren’t gender-specific situations that you may need help with.

For one, be aware that there are gender-specific stereotypes the men in nursing may encounter. Angelis found that sometimes patients or other hospital staff assumed that he was less empathetic than he actually was—and that can be a frustrating assumption. Showing true empathy for patients is a virtue for all nurses, so don’t be afraid to show it.

Additionally, Angelis also found that increased diversity can lead to increased miscommunication. Sometimes, this may mean working on being more emphatic, direct or gentle. This self-improvement may mean having a conversation with a supervisor, or realizing that you may need to speak and act in a different manner around others.

Wali Kahn, an intensive care unit RN-BSN, estimated that his nursing colleagues were 90 percent women and 10 percent men, and emphasized that not only do men and women operate differently, but also that the differences can be even more evident in group settings. Women tend to care about certain subjects or issues more than men, and, while working in a group of women, Khan has learned to be sensitive to this. He found that he has carried a “Different level of ethics and respect” while working in a setting with a women’s majority that he doesn’t think he would possess if he were working primarily with men. This has helped him be more conscious of respecting those individuals in leadership.

Leal also mentioned that future male nurses need to remember not to take everything personally. Some tasks require getting in a patient’s personal space and some patients may prefer to request a female nurse. When this happened early on in his career, Leal felt like his professional integrity was being questioned, but he has grown to have a better understanding of patient’s concerns and comfort level. Patient preference can go both ways, too. Ceniceros says he’ll occasionally be asked to work with patients who are unruly toward his female colleagues. Patients’ concerns might not always be rational—but having the option of seeing a male nurse can help for some.

Should this even be a conversation?

Many men in nursing are frequently asked why they aren’t doctors, pharmacists, physician’s assistants or anything other than a nurse. Angelis has learned to be confident in his career path. “You don't have to excuse your decision to others or have a PowerPoint prepared on why you didn’t want to be a pharmacist or physician.” Even though questions like that can get annoying, some male nurses find the rationalization about men in the nursing field even more unnecessary.

Kahn has worried about how the very existence of this cultural conversation could affect younger generations of men thinking about nursing careers. Don’t worry about what other people will think about your decision, he says. Consider instead how you might fit into the profession based on your drive and skills.

“Don’t be intimidated. Dive in. You won’t regret it,” says Thomson.

What makes nursing worth it?

No matter your background, the nursing field needs smart and capable leaders. If you can provide that, then you’ll be welcomed with open arms. So does pursuing a nursing career sound worth it to you? There’s plenty to ponder before making that decision, but Leal points to a recent experience with a patient who had a brain injury—the patient recently made a follow-up visit to show the staff all of the progress he had made and to thank them for everything they did during his stay. While the staff might see it as just doing their jobs, Leal says that single experience has made “Every bad shift he’d ever had worth it.”

Regardless of your gender, don’t be afraid to follow your passion for making a difference through nursing. Your unique perspective can add a layer of depth to your team, and nursing gives you the tools to make a difference every day—often with a uniquely flexible schedule. Looking for more nursing career inspiration? Check out our article, “The Best Day on the Job: 4 Nursing Stories That Prove It’s All Worth It.”