MN Nursing: 4 Reasons Why It's Great to Be an RN in Minnesota 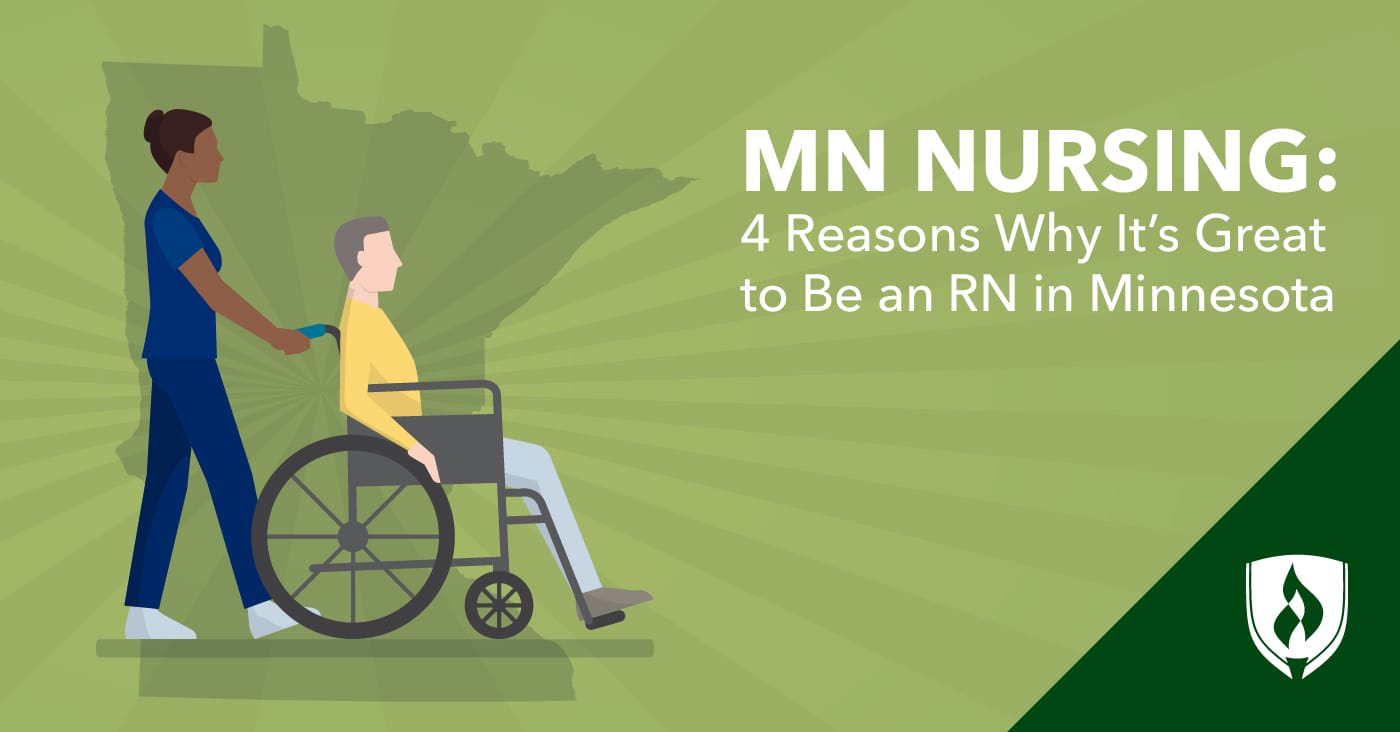 The nursing profession is growing, and if you’ve got the right mix of head and heart to take on this career, you could help fill the demand currently underway in healthcare—an industry adding more jobs than any other in the coming years, as projected by the Bureau of Labor Statistics (BLS).1

And if you reside in Minnesota, you’ll be happy to hear you’re in a prime location to launch a promising nursing career. The North Star State was ranked the second best U.S. state to work as a nurse, according to Wallethub, taking the top spot when it comes to nursing work environment.

But that’s only the start of the story. We analyzed the data and scoured registered nursing (RN) job postings in Minnesota to get a sense of what’s out there and what nurses can expect.

Keep reading to learn more about Minnesota nursing and why the state has so much to offer RNs.

4 Appealing aspects of nursing in Minnesota

There’s a lot to love about being a nurse in the Land of 10,000 Lakes. Take a look at a few of the perks Minnesota nurses can expect.

1. Nurses are in demand across Minnesota

It’s a nationwide trend that nurses are in demand. With aging baby boomers needing more medical attention and seasoned nurses facing retirement, the nursing profession is projected to continue growing in the coming years. This is especially true for nurses in Minnesota.

Here’s some good news for nurses in the North Star State: the Minneapolis-St. Paul metropolitan area was ranked as one of the nation’s top-ten locations for nursing employment levels, joining the ranks of other major hubs such as Los Angeles, New York, Boston and Chicago. These areas all have high employment levels of nurses, as reported by the BLS.2

That employment level is expected to continue rising, with Minnesota registered nursing jobs projected to increase 11 percent through 2026.1 And one might assume all of those jobs are limited to the Twin Cities, but that’s not the case. We used real-time job analysis software to examine more than 18,000 RN job postings in Minnesota from the past year. The data revealed significant demand for nurses in Duluth, St. Cloud, Rochester and Mankato as well.3

Minnesota is home to many reputable healthcare organizations, which inevitably means employment opportunities for nurses. In fact, it comes in third on the list of states with the most healthcare facilities per capita, according to Wallethub’s rankings.

The most prestigious of these is Rochester’s Mayo Clinic, a hallmark of the medical community since 1889. Since its beginnings, the Mayo Clinic sought to provide the best care while also committing to medical research and education. Last year they treated over a million patients from all over the world. It was also ranked as the nation’s top hospital by U.S. News & World Report.

The Mayo Clinic is not the only outstanding option—there are plenty of other award-winning healthcare facilities within the state of Minnesota. For instance, St. Cloud Hospital and Minneapolis’ Abbott Northwestern Hospital were nationally ranked in certain specialties by U.S. News & World Report. And as a state overall, Minnesota is ranked as one of the top 10 best states for healthcare in the U.S.

Prestigious healthcare companies are great to have locally—but are they hiring nurses? We referred to our Minnesota RN job analysis to identify which facilities were hiring the most nurses over the past 12 months.3 Here’s what we found:

3. MN nurses are among the top earning RNs in the U.S.

Across the board, nursing is a career that typically offers a healthy compensation: the BLS reports the 2019 median annual salary for RNs nationwide was $73,300.1

However, nurses in Minnesota may be at an advantage when it comes to earning potential. MN is in the top earnings quartile for nurses—with a mean annual salary of $80,130 in 2019, according to the BLS.2 While most of the other states in this top bracket—such as California and New York—line the coasts, Minnesota is the only Midwestern state in the top pay range for average nursing salaries.

And when adjusted for cost of living, Minnesota was found to have the third highest annual nursing salary, according to Wallethub’s rankings. That’s good news for aspiring nurses looking to earn their scrubs in Minnesota.

Minnesota is a pretty great place to live, don’cha know? The North Star State came in third in U.S. News’ Best States study, ranking highly in factors like livability, health, education and opportunity, among other factors. In short, it’s a state with a strong economy, reasonable affordability and a great quality of life.

While it’s not in most Minnesotans’ nature to brag, the state frequently tops the charts of many state rankings. It was ranked second on WalletHub’s list of best states for women. Love the outdoors? Minneapolis was found to be the most bike-able city in the U.S., and is ranked in the nation’s top park systems, along with neighboring St. Paul. Minneapolis also came in third on the American Fitness Index.

As you can see, there are a lot of appealing aspects about living in Minnesota. And to wrap it all up, it even finds itself ranked in the top three happiest states in the U.S.

From the earning potential to the prestigious employers and promising growth, nurses have plenty of reasons to want to launch their career in Minnesota. Now that you know why it’s so great to be a nurse in Minnesota, are you ready to prove it? By becoming a registered nurse in Minnesota, you’ll join a growing field and have the chance to make a difference in the lives of patients—all while enjoying the many perks of living in this lovely Midwestern state.

If you’re interested in starting a nursing career, be sure to check out our Rasmussen University Minnesota campuses page to learn more about Minnesota Nursing education options and how you can join legions of healthcare heroes at the frontline of care.