Why is There (Still) a Nursing Shortage? The REAL Reason Nobody's Talking About 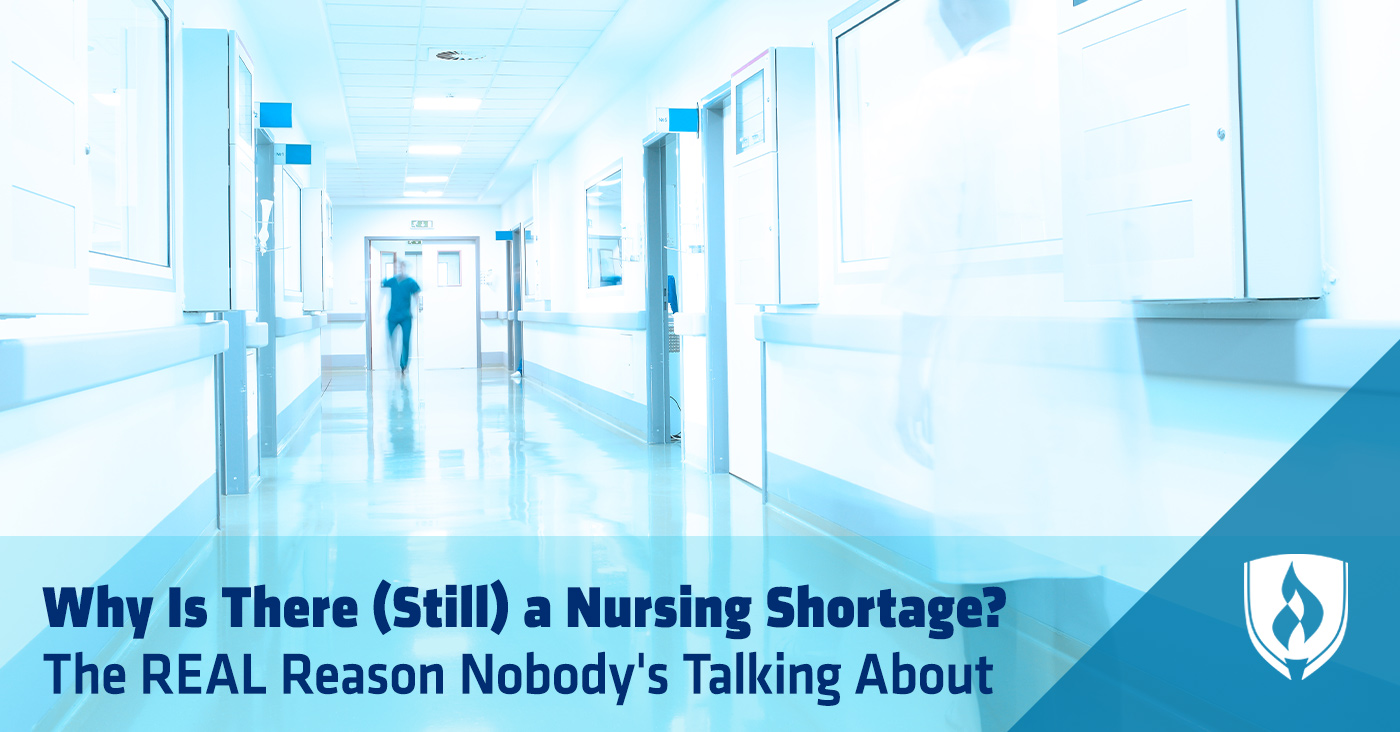 Anyone who knows a nurse or is lucky enough to be one knows just how difficult it is to get into a nursing program. It’s a competitive world filled with qualifying exams and wait lists. But the squeeze of nursing admissions is a symptom of a larger problem—one with weighty implications.

One such implication is the national nursing shortage. You’ve heard of the shortage before—you’ve been hearing about it for years. So why is it still a problem?

With many nurses retiring out of the profession, an aging population requiring more care and the Affordable Care Act opening the doors of healthcare to thousands of new patients, the nursing shortage has never been more alarming. Join us as we examine the nursing shortage and dig into the real reason behind the lingering crisis.

“The staffing shortage is a constant problem, every single day,” says Nicholas Conley, who experienced the issue firsthand while employed in a nursing home.

Shortages like these are amplified by growing demand in the field. Looking ahead, the nursing field is projected to grow 16 percent through 2024, which is a much higher rate than the national average, according to the Bureau of Labor Statistics (BLS).

"The aging population continues to grow and we as a healthcare industry are unprepared."

In fact, it’s expected to be the second-fastest growing occupation over the next few years. Besides the half million nursing jobs that will be added, another half million nurses will be needed to fill positions of nurses who leave the field.

But the problem is there are not enough nursing professionals to meet this growing demand. Enter the nursing shortage.

“I don't think I go a week without hearing about how difficult it is to find a qualified geriatric nurse. As a gerontologist, this concerns me greatly,” says Jennifer L. FitzPatrick, MSW, LCSW-C, CSP of Jenerations Health Education. The shortage is more pronounced in some nursing specialties, such as geriatrics, under the strain of aging boomers. “The aging population continues to grow and we as a healthcare industry are unprepared,” she adds.

News of a nursing shortage is nothing new. But why has nothing changed?

Nursing shortage by the numbers

It’s not that there isn’t interest in nursing. It’s a field that’s always held its weight in attracting students. The difficulty of getting into nursing school is a testament to the field’s popularity—and its fatal flaw.

It’s so difficult to get accepted into a nursing program because there’s simply not enough room for everyone who is interested. Educational institutions don’t have the means to produce a large enough pool of qualified nurses that the workforce demands.

In 2014, US schools turned away almost 70,000 qualified nursing applicants because they didn’t have the capacity for them. In fact, almost two-thirds of surveyed nursing schools cited faculty shortages as the reason for not accepting all qualified applicants into nursing baccalaureate programs.

So why are schools so incapable of expanding capacity in such a time of need in the nursing field? The real reason behind the nursing shortage points to yet another shortage in the field: the shortage of nurse educators.

The real reason behind the nursing shortage

The shortage of nurse educators is the root cause of the national nursing shortage.

With the scarcity of nurse educators, nursing schools are turning thousands of qualified candidates away because of incapacity, much to the schools’ dismay. Schools are trying to find a way to fix the problem. But with thousands of nursing faculty vacancies across the country, the majority of surveyed schools said they had difficulty recruiting qualified applicants for open teaching positions.

It’s clear there is a problem here. But why can schools not find enough nursing professors?

Many nurse educators are aging out of the profession, with the average age of a nurse educator being 50 or older. With many edging up to their retirement, colleges and universities will be strapped for replacements. But it’s a catch-22 because the master’s and doctoral nursing programs cannot produce enough potential nurse educators to meet the demand.

Aging educators and a small pool of candidates to replace them sounds bad enough, but there is one more wrench to throw in. Nurses obtaining their master’s or doctoral degrees are being lured away from the education field for higher-paying options, such as a nurse practitioner career, which can net them almost $20,000 more a year.*

It’s a problematic cycle—a lack of nurses becoming educators is preventing more hopeful nurses from entering the field to meet the demands of the population and ease the strains of the shortage. But it can be helped.

You’re aware of the severity of the national nursing shortage crisis – so why not do something about it? Unlike many nursing schools, multiple Rasmussen College campuses have no waiting lists for prospective nursing students. Learn about some other features that set this program apart from the rest in our article: 10 Facts You Didn’t Know About the Rasmussen College School of Nursing.