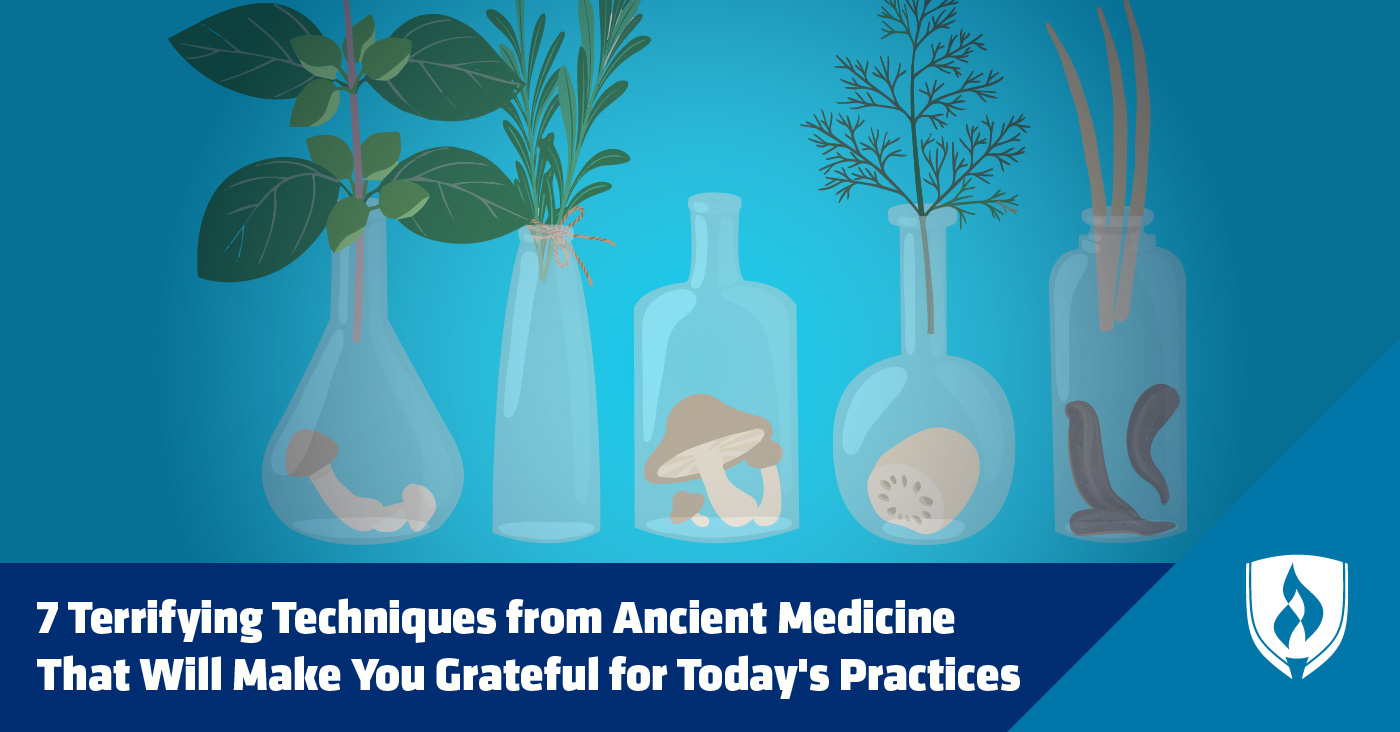 Modern medicine is nothing short of a miracle, and its advancements in just the past hundred — even fifty — years are astounding in itself. Our potential longevity and quality of life are better than ever before thanks to recent advancements in sanitation, preventative care and pain management in medicine.

But it hasn’t always been this way.

Join us as we peruse a handful of the deadly, disgusting and even horrifying ancient medicine practices (and some not-so-old ones) sure to make your skin crawl.

Now known to be poison to the human body, mercury medical use stretches back thousands of years. It was once a staple in ceremonies and the treatment of skin disorders. It’s been found in ceremonial cups inside Egyptian tombs. The Indian and Chinese used it as an aphrodisiac. Chinese women even used it as a contraceptive.

Doctors once utilized the chemical element to treat syphilis. While some believed it to cure the disease, it more often caused deadly kidney and liver damage from mercury poisoning. William Shakespeare is thought to be one of the more famous casualties of mercury therapy.

2. One method that stuck around a while

For many years, excess of blood was thought to wreak havoc on the human body and bloodletting seemed to be the answer. And what better way to remove blood from the body than its biggest fan — leeches?

Leeches were used for bloodletting to treat all sorts of diseases as far back as 1600 BC. Their popularity seems to have reached across many cultures too, especially with the Egyptians, Romans, Greeks and French. Leeches fell out of favor in the 1600s, but returned with a vengeance years later — so much so that the demand adversely affected leech populations.

Would you volunteer for an ice pick through the eye socket to soothe your nervous disposition?

Lobotomies emerged in the mid-1930s as an answer to the strain of mental illness — destroying certain nerves in the brain was thought to eliminate excess emotions and promote stability. A popular form of this procedure involved sharp ice pick-like instruments that were inserted through the eye socket and into the prefrontal lobes of the brain. Lobotomies were also thought to cure mental conditions like schizophrenia, anxiety, depression, mood swings, psychosis and even symptoms that may sound like autism to today’s ear.

Despite the apparent brutality, lobotomies were received better than you’d imagine — the inventor of the procedure was even awarded a Nobel Prize for his endeavors. Thousands eagerly tried the procedure throughout the mid-century, yielding mixed results. About two-thirds of patients remained institutionalized after their procedures — some remaining in the same condition, some experiencing devastating results. For the other third, the ice pick seemed to work its magic.

While this practice peaked in popularity in 1940s and 50s, doctors continued to perform lobotomies well into the 1980s throughout the US, Scandinavia and Western Europe.

By the mid-1800s, Western medicine began struggling with its wide use of morphine, the wonder drug used liberally during the Civil War. But doctors soon discovered that this euphoric painkiller was extremely addictive.

Heroin was the answer to addictive morphine — a so-called safe and non-habit-forming alternative for doctors to administer. Available for many years in over-the-counter kits, heroin was used as casually as ibuprofen is today. Marketers promised its effectiveness in treating everything from cancer to coughs and colds to tuberculosis and depression. Unfortunately, this pitch was less than honest, also touting heroin as both “safe” and “non-addictive.”

Sales in the United States were largely unregulated until 1920, when Congress enacted the Dangerous Drug Act. By then, hundreds of thousands of Americans were already hooked.

5. A shocking approach to medicine

While the popularity of electroconvulsive therapy (ECT) peaked during the 1940s and 1950s, inducing seizures or convulsions dates back to the 1500s.

Electronic stimulation prompting seizures was used to treat severe mental conditions, such as depression, catatonia, mania and psychosis. It was even proposed at one point as a cure for homosexuality.

Electric currents were sent through electrodes attached to the scalp, causing convulsions in the patient. Patients had no memory of the event following the procedure.

ECT developed a strong stigma in the public eye and fell out of fashion, though its effectiveness is still a matter of debate. Despite the ongoing controversy, ECT continues to be administered as a last resort in certain cases.

6. A very direct means of treatment

Another migraine? With no ibuprofen to soothe your aching noggin, many of our ancestors resorted to drilling holes in their skulls, a procedure known as trephination. It was also thought to amend seizures, mental disorders and relieve bleeding on the brain.

Cave paintings and human remains tell us trephination dates as far back as the Stone Age. Trephination was first believed to be conducted with a sharp stone to scrape away the bone of the skull. Later mechanical drill devices were utilized to more easily achieve the same results.

Surprisingly, despite the crude tools used, evidence shows some of these early patients survived and lived for years past their operations, some even surviving multiple procedures. Today, trephination is still used in some types of eye surgeries and in cases of traumatic brain injuries, but in much safer and painless conditions, of course.

Skulls of the deceased were crushed and consumed to treat head ailments. Human fat was used as a rub to cure gout. Even human blood was considered to hold health benefits, though it came at a hefty cost at the local apothecary. The poor found a way around this by attending local executions and receiving a cup of the recently-deceased’s blood.

Fortunately, our ancestors’ appetite for cannibalistic medical practices ceased in the 1700s.

From ancient medicine to some darker periods in the medical community’s not-so-distant past, it’s easy to see that the medical field was once far from what we know it to be today.

While a quick look back through the history books shows doctors didn’t always get it right, it also shows why our ability to learn from the mistakes of the past is crucial. But not all knowledge is created equal.

As part of this ongoing evolution of medical education, patients are increasingly seeking out alternative methods to alleviate their conditions, and sometimes that complicates things from a healthcare standpoint. For more information, check out our article: 7 Things Nurses Should Know About Complementary Medicine.