Patient Perspective: 3 Moving Stories to Say 'Thank You' to Nurses 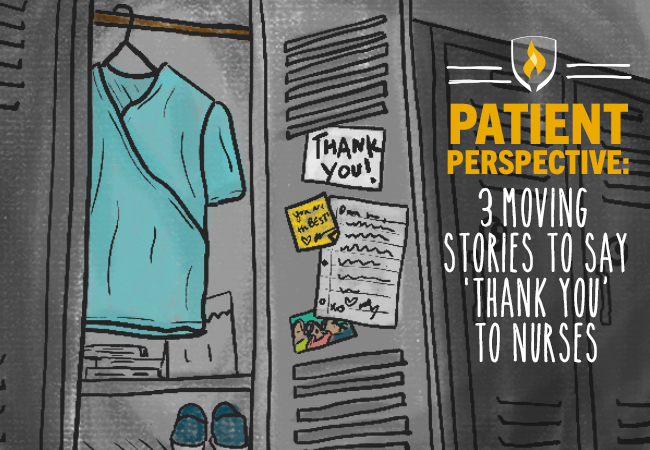 When you think of careers that make a difference in people’s lives, nursing is probably somewhere near the top of your list. These selfless healthcare workers spend their days caring for others, calming patients’ fears and truly listening to their concerns. Nurses are the everyday superheroes that make an impact on people just by showing up to work every day!

If you or a family member have ever had an extended stay in a hospital or other healthcare facility, you’ve likely witness the super powers of a nurse firsthand. But in the midst of all of the worry and the hustle and bustle of the hospital, you don’t always get a chance to acknowledge their contribution.

Many patients leave the hospital before having a chance to express their gratitude to the nurses who made all the difference to them. So we’re giving them a chance to say “thank you” to all of the amazing nurses who work tirelessly to bring the best care to their patients.

We compiled three heartwarming stories about nurses who went above and beyond for their patients. These are just a fraction of the thousands of similar stories out there, but it’s our way of saying, “Thank you, nurses!” from patients everywhere!

Going above & beyond in the NICU

The Neonatal Intensive Care Unit (NICU) is somewhere no parent wants to see their newborn baby. But when blogger Lisa Hensley’s oldest son was sent to the NICU as an infant, it was their primary care nurse who made the scary situation feel a little easier to handle.

“In a world where few things are soothing, every little bit helps,” says Hensley. She bonded with her family’s primary care nurse as they chatted during quiet night shifts. The two traded stories about each others’ families, and Hensley shared many of the fears she was facing as a new mother with a baby who had just been diagnosed with a rare disorder.

“I know she paid a price for caring so much for her patients when it was time to watch them leave.”

“She was sympathetic, but also encouraging and cheerful,” Hensley recalls. “She was gentle as she cared for my little boy and I knew she would be there if he had any problems.” It was this trusting relationship with their primary care nurse that helped Hensley and her family make it through her son’s scary and uncertain days in the NICU.

“I know she paid a price for caring so much for her patients when it was time to watch them leave,” Hensley says. “Even though that was our happy ending, it was hard. But I appreciate that she gave that much.”

An off-duty nurse to the rescue

No one wants to be struck with a medical emergency in the midst of everyday life. But if a crisis does arise, a nurse is the one you’d want nearby to help. Melissa Golebiowski, publicist at Lost Literati PR, is forever grateful that an off-duty nurse was there to help when she experienced a seizure at a concert several years ago.

“My seizure was a reaction to medication and was nothing I had expected,” Golebiowski says. One minute she was standing behind her friends and the next she was waking up on the ground after blacking out, unsure of what had happened. She stopped breathing during the seizure.

Golebiowski’s friends told her that they didn’t know what to do when it happened. Luckily, an off-duty nurse nearby stepped in to save the day. She told everyone to back up and administered mouth-to-mouth resuscitation until she began breathing again. When Golebiowski woke up, she was rushed to a medic center and didn’t get a chance to thank the nurse.

But years later, she knows exactly what she’d say.

“I would say thank you and that I wasn’t surprised it was a nurse that helped me,” Golebiowski says, whose mother is also a nurse. “Growing up, I always knew that nurses are a very special type of person. They harbor a certain kindness that isn’t present in all professions.”

“Growing up, I always knew that nurses are a very special type of person. They harbor a certain kindness that isn’t present in all professions.”

Al Smith was on his regular monthly business trip to Little Rock, Arkansas, when his life took a frightening turn. He was unknowingly getting carbon monoxide poisoning from his rental car as he drove to his hotel. Smith, president of Transition Sherpa and author of HIRED!, made it to the front desk to check in and returned to the car to park. He found a parking spot, took the keys out of the ignition and passed out.

As luck would have it, someone looking out of their hotel window spotted that the car was on fire. Firemen arrived, but because the car wasn’t running and the windows were covered in soot, they had no way of knowing the unconscious Smith was trapped in the burning vehicle. It wasn’t until 20 minutes later that they opened the car door and discovered him.

He was given no chance to survive as he was rushed to the hospital. But that was before his determined ICU nurse took over. She had lost two patients earlier that day and promised herself that Smith would not be the third.

“She worked overtime. She showed up on her days off. She attended, not only to me, but also to my wife,” Smith recalls. He says he owes his life to his dedicated nurse who gave everything she had to help him beat the odds when it seemed as if all hope was lost.

“I would likely not have lived without her!”

Could you be the next nursing hero?

These incredible stories are our way of saying, “Thank you, nurses!” These hardworking men and women make a difference in others’ lives every single day and don’t always get the recognition they deserve.

Nursing is one of the few professions that allow you to be someone’s hero day in and day out. If you like the idea of making a living by making a difference, maybe you’re destined to join their ranks!

Not only would you be impacting the lives of your patients, but you’d also be reaping the rewards of working in such a satisfying field. You’ve heard from the patients, now hear it straight from the nurses in our article: The Best Day on the Job: 4 Nursing Stories that Prove it’s All Worth it!