The Benefits of AI: 6 Societal Advantages of Automation 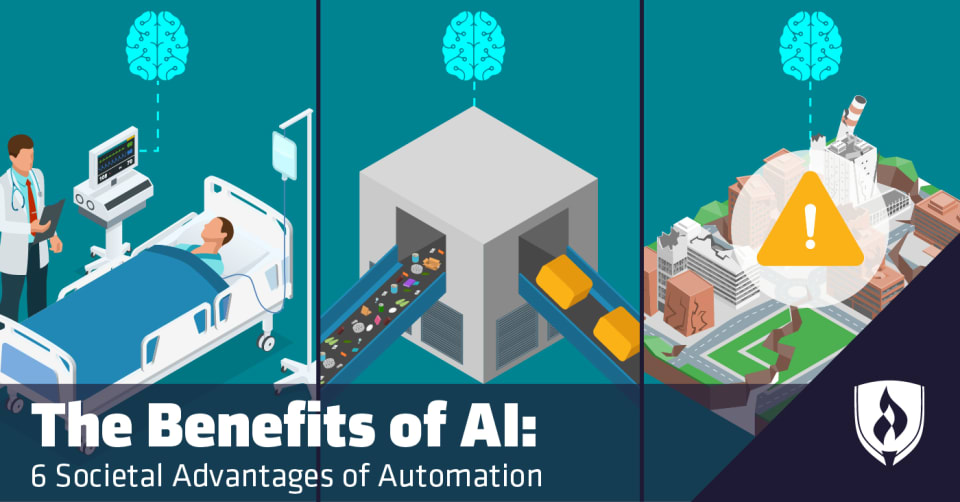 Artificial intelligence still sounds like the stuff of a far-off future in a science fiction show. To many people, AI’s what leads to the apocalyptic network of murderous robots found in the Terminator movies—it just doesn’t register as a concept that could actually have tangible effects.

While the robot death squads haven’t appeared—yet—early applications of artificial intelligence are already part of our daily lives. There’s good news beyond avoiding worst case sci-fi scenarios—in fact, AI is making strides toward creating a better world for everyone.

There are many unseen benefits of artificial intelligence that you might not be aware of. We spoke with experts in the know to bring you these six benefits of AI that are changing the world for the better.

Like with any new or emerging technology, it’s easy for us to get collectively caught up in the potential downsides. That’s a perfectly understandable and maybe even instinctual response—most creatures don’t make it far if they’re not a least a little cautious, after all. But humans have come a long way by embracing innovations and adapting. So what has early adaptation of AI and machine learning techniques helped with? Take a closer look at six potential benefits.

Artificial intelligence has the potential to advance the healthcare field by leaps and bounds, but perhaps the most beneficial advancement within reach is the ability to better diagnose diseases. “Through deep learning, artificial intelligence can potentially reduce cost and improve the accuracy of diagnosing critical disease on radiographic imaging,” says Dr. Kelenne Tuitt, a family medicine physician.

This benefit is especially pronounced for cancer patients, when early detection of the disease can be the difference between life and death. “Recently there have been studies that showed AI was able to pick up on subtle changes that could diagnose certain cancers sooner than a typical radiologist,” Tuitt says.

AI has the potential to be a huge benefit for conservation and environmental efforts, from combatting the effects of climate change to improving recycling systems. Dr. Tuitt shares that AI, combined with robotics, can “transform the recycling industry,” allowing for better sorting of recyclable materials. “This will reduce cost for this industry as well as improve the environment.”

AI is also protecting habitats and animals around the globe. A Google®-founded platform called Global Fishing Watch uses machine learning technology and Google Earth® to identify fishing vessels and protect endangered marine habitats, and a report from the McKinsey Global Institute shows that AI can be used to detect and locate poachers.

Natural disasters like tornadoes, hurricanes, floods and more can strike suddenly, leaving citizens with little time to prepare. Disasters like these have a huge impact, affecting more than millions worldwide with at times prolonged recovery periods.

Artificial intelligence doesn’t have the power to prevent natural disasters, but it can help experts predict when and where disasters may strike with more accuracy, allowing people more time to keep themselves and their homes safe.

Google teamed up with Harvard to develop a deep learning network that was “significantly more accurate” than the current model at predicting the location of earthquake aftershocks, and the tech giant has also created an AI system that offers flood forecasting to vulnerable locations in India.

Every child learns in their own way at their own pace, and teachers aren’t always able to meet every student’s needs in the way that’s best for them. That’s where AI comes in.

“AI is able to teach efficiently 24 hours per day, and it has the potential to provide one-on-one tutoring to all students,” says Ray Walsh, technology and digital privacy expert at ProPrivacy. “This can allow all students to get constant, personalized tutoring based on their needs.”

While this is still an emerging application of AI, there’s the potential to create highly-personalized lesson plans for students and reduce the time teachers spend focusing on administrative tasks. Not only can AI improve the learning experience, it can also ensure that children in all situations and areas of the world have access to an education.

“AI has the potential to democratize education by providing world-class education regardless of where students reside,” Walsh says.

In a time where mass shootings have become tragically common in the United States, experts are using AI to develop solutions that could keep innocent people safe from acts of violence. “While there may be backlash over the security use of AI for facial detection, in light of recurring mass shootings their use in assault rifle detection is largely seen as a major gain,” says Jon Knight, chief security officer at Fortified Estate.

Knight explains that schools, businesses and individual homeowners don’t always have the ability to hire round-the-clock security personnel to keep their environment secure. Artificial intelligence can provide an immediate response by recognizing when someone is carrying a firearm.

“The benefit in being able to detect openly held large firearms would allow crucial seconds of lockdown, emergency calling or other forms of protection that can save numerous lives,” Knight says. “For example, soon door locks will be able to be automatically engaged when this sort of presence is detected outside, where laws prohibit firearms on school properties.”

You’ve probably heard people worrying that “robots” will take over their jobs. While it’s a reasonable thing to be concerned about, AI is positioned to improve the workforce for everyone by reducing the hazards employees face in certain work settings.

Peter Scott, futurist and computer contractor to NASA, believes that AI can make workers safer by enabling devices or robots to take on dangerous tasks like bomb disposal or working with hazardous materials like nuclear waste. AI can also mitigate the health risks of careers that can harm workers through repetitive movement, exposure to toxins or driving in unsafe conditions. “[AI] will relieve us of the need to employ humans in repetitive, boring or unhealthy tasks, ranging from truck driving to telemarketing,” Scott says.

While obviously there’s potentially massive repercussions to eliminating tedious jobs that people rely on, if these shifts are managed properly they can unlock a massive positive shift in our lives. With AI taking the place of these jobs, people can pursue more fulfilling careers that themselves contribute to the well-being of society.

Will you be part of the AI evolution?

These benefits of AI are being developed right now, with even more positive changes on the horizon. The tech field relies on trained computer scientists to continue expanding artificial intelligence and changing our world for the better.

Earning a computer science degree is the first step to being part of this exciting time in AI technology. Find out if this is the right path for you with our article, “Should I Major in Computer Science? The Data You Need to Decide.”

Google and Google Earth are registered trademarks of Google, Inc.