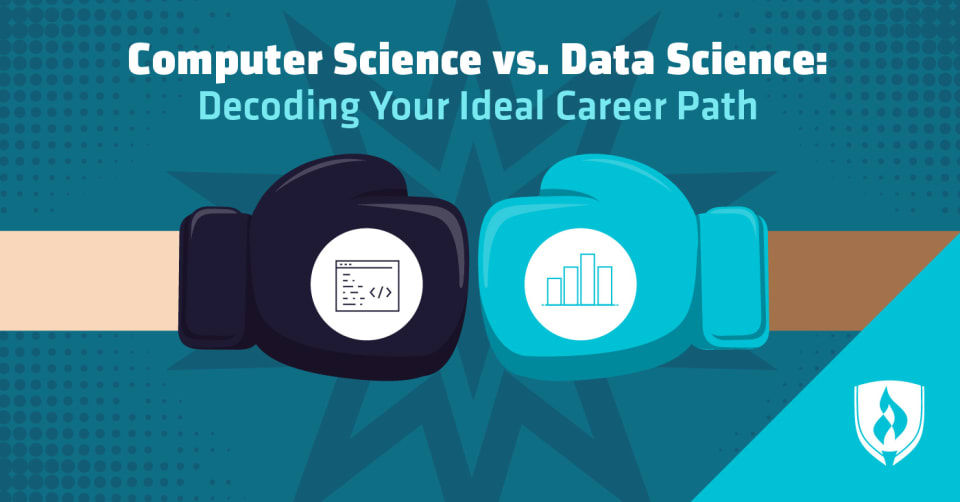 While you are fascinated with the world of possibilities that the booming tech industry promises, it can be a challenge to keep up with the field and its various niche specialties. One specialty area that’s been the center of a growing buzz in the community is data science.

If you currently work in the field, are a self-taught coding connoisseur or are simply in-touch with tech, you are probably at least somewhat familiar with computer science and the exciting programming careers tied to the field—but where does data science fit in? Is one a better option for tech hopefuls to pursue than the other?

In this article, we’ll break down data science versus computer science to help you make better sense of it all.

To begin, let’s explore the fundamental differences between these two computer careers. Computer science is the older of the two subjects, dating back hundreds of years. In fact, the first “computer programmer,” Ada Lovelace, lived in the early 1800s—over a hundred years before the first modern computer was created. On the other hand, data science is a relatively new field in technology that has grown as businesses and organizations seek to put the massive amounts of data they collect to good use.

Computer Science is the study of the theory and practice of how computers work. “When you earn a degree in Computer Science, you learn programming, software, operating systems, algorithms and everything needed to run a computer,” says Nirupama Mallavarupu, founder of MobileArq. “You learn to solve problems using technology.”

Those who study Computer Science learn programming languages such as Python®, JavaScript® and Java® as well as the fundamental elements that make these languages work. In school, topics such as operating systems, networking, security, algorithms and computer architecture are taught as well. Overall, computer science focuses solely on computers.

Data science isn’t as clear cut; it’s an interdisciplinary field involving computer science and statistics. Statistical analysis is nothing new, but the scale of the data sets and computing power needed for analysis certainly are.

“Data science is an advanced discipline that teaches students how to analyze and find patterns in large amounts of data,” Mallavarupu says.

In data science, data is gathered (or mined) and analyzed for any valuable insights, trends or patterns. Those in a data science field use programming languages such as R, SAS, Python® and Java®, and software such as Hadoop, Tableau and Apache Spark to process, refine and display their findings. Data Science degrees focus on mathematical concepts and understanding, such as calculus and statistics. Other subjects such as machine learning, deep learning, data visualization and databases are also covered.

If you’re trying to determine which field to study, it’s good to know about the job titles you’d potentially qualify for in your career. After all, you don’t really see many people walking into work with the job title computer scientist, so let’s shed some light on what’s actually out there. To help with this, we used real-time data analysis to find the top job titles for those who have earned a Bachelor’s degree in Computer Science.1 The most common job titles seeking Computer Science degree are: Software development engineer, software developer, Java® developer, systems engineer and network engineer.

Those who work in the field of data science may have titles such as data scientist, data architect, data engineer, business analyst and data analyst.

Another important aspect to consider when deciding between Data Science and Computer Science for your education is the type of work you’d like to be doing. While there’s plenty of variation between individual jobs in both fields, there are some common duties found across occupations for both.

In general, computer science jobs revolve around building, modifying and digging into the inner workings of software applications. Data science jobs are a bit more abstract—often their work revolves around attempting to improve a process or answer an unknown by pulling together huge amounts of information from multiple sources and analyzing it.

Before jumping into either one of these fields, you will want to consider the amount of education required. Both data science and computer science occupations require postsecondary education, but let’s take a closer look at what employers are seeking in candidates.

Knowing what education is required for your dream job can help you understand where to begin. If you are looking to become a data scientist, you may spend more time in school than a software developer or programmer with a Computer Science degree. Because there is a fair amount of overlap in subject material, an undergraduate degree in Computer Science may be an appealing route for aspiring data science professionals. Additionally, undergraduate programs that focus on mathematics, statistical analysis and data analytics can provide a solid foundation for those with their eyes on a Data Science Master’s degree to build on.

Data science vs. computer science: Which is for you?

Both computer science and data science are exciting, in-demand technical fields that require a level of comfort with technology, mathematics and programming. So how do you decide which is right for you? Cristian Renella, CTO and founder of oMelhorTrato, offers the following as a rule of thumb.

“If you like to build new things, then I would recommend computer science, but if you like to analyze, study and reach conclusions based on data that is generated in real time, then data science is for you,” Renella says.

No matter your preferred final focus area, a Bachelor’s degree in Computer Science can set you up for success as it can provide a solid foundation for future data science education.