'Garbage In, Garbage Out' and Other Tech Lingo You Won't Find in a Textbook 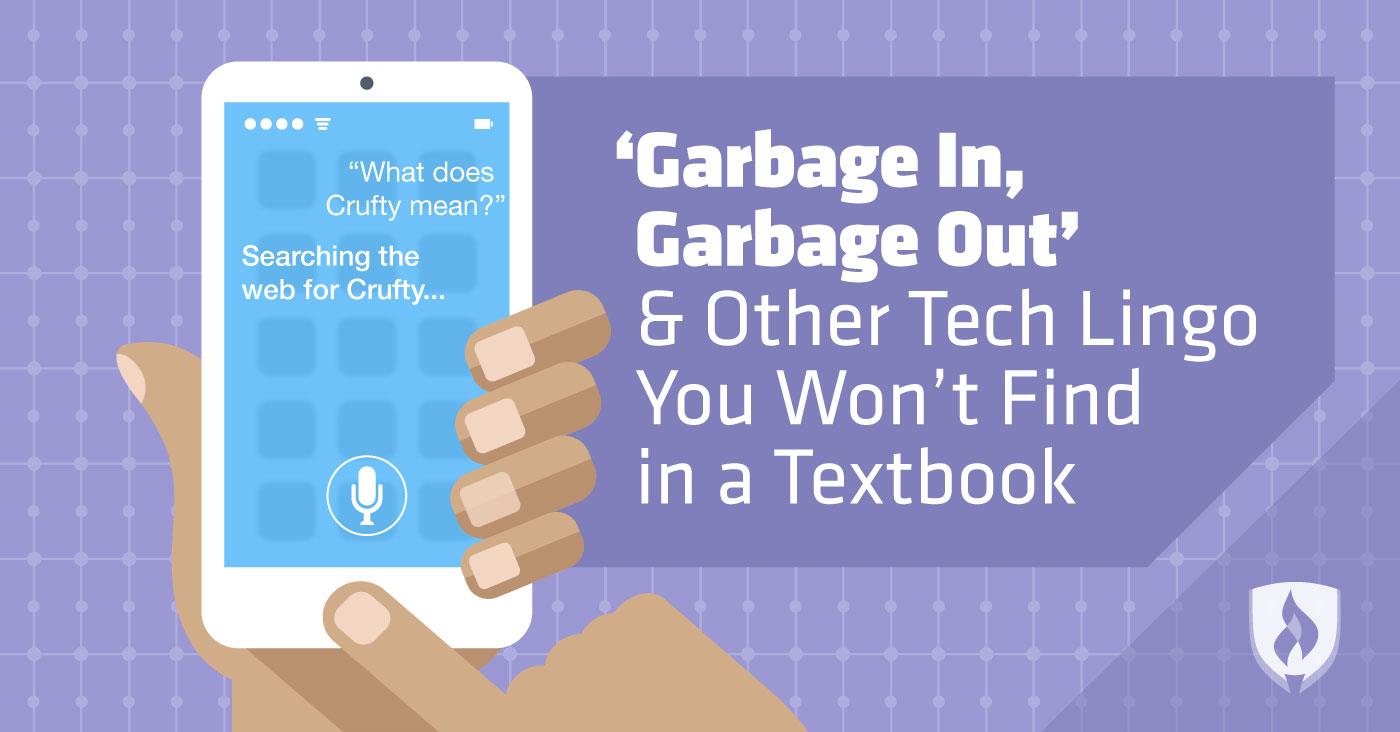 If you’ve ever hung out with programmers or even read up on some online tech forums, you’ve probably figured out that there’s a unique set of terms, acronyms and abbreviations the tech world uses. With words like “grok” and “kludge”, and phrases like “garbage in, garbage out”, it can feel like you’re on a whole other planet.

As someone interested in earning potential and increasing opportunities, you don’t want to be left behind or thought of as a “luser”, simply because you can’t follow along with the terminology. Take a few moments to familiarize yourself with these 10 examples of tech lingo, with explanations that will prepare you to talk like the tech expert you’re hoping to become.

The tech industry is full of colorful language—and not just the kind that accompanies a particularly frustrating debugging session. Here are just a handful of examples of the seemingly out-there terms and phrases floating around the industry:

This term refers to a principle of computing—if your inputs are bad, don’t expect a quality output. If you provide inaccurate data and run it through a computer program, the results won’t matter. For example, inputting data about apples into a program created to measure oranges isn’t going to give you an accurate measure of oranges.

This strange word is a play on the term, “hand-crafted”, and essentially refers to code that is messy, unpleasant or poorly built. “Cruft” can also be a noun and a verb, once again referring to poorly written or extraneous code.

Gamification is the process of making a “game” out of an otherwise non-game activity; often this accomplished through apps or software. For example, a gamified approach to fitness would reward users with badges or other unlockable content for logging a certain number of steps in a week or for working out a set number of days per week.

Plenty of things happen automatically when dealing with programming—and many of these automatic actions are pretty simple to explain. Obviously, there’s no “magic” in programming, so when an action is described as being done “automagically”, it’s often used as a shorthand way to describe a complex, behind-the-scenes automated process that is unclear to users. For example, a user typing two letters into a search field, and the site “automagically” gives a predictive suggestion of what you’re looking for.

In software development terms, this is the simplest, most stripped-down, usable version of the program. Often MVPs are released to the public to gather feedback and suggestions for how to improve it—DropBox is a prime example of how this process can be successful.

Kludge is a term that refers to a fix for an error or bug that is pieced-together in what is often an inelegant way, but still works. Sometimes errors in the work of a previous programmer can be resolved by adding new code that incorporates and works around the buggy code. A kludge is usually used to save time—a quick fix instead of diving deep and fixing the underlying issue.

“When nine hundred years old you reach, look as good you will not.” – Yoda

This is a term used for the odd-looking syntax sometimes used by programmers where the typical structure of a conditional statement is reversed. This flipped structure makes the code end up sounding like everyone’s favorite Jedi master. For example, “If my number is 4, then print XYZ” would be structured like “If 4 is my number, then print XYZ”.

It may evoke images of hellfire and brimstone, but a daemon is actually just the name for a background process that lies dormant until a condition occurs, requiring it to act automatically without user input. You may have seen an example of a daemon if you’ve ever made a typo in an email address and hit send—the automated email reply is sent by a Mailer-Daemon. Despite the sinister-sounding name, daemons are incredibly useful.

It may make you think of Sesame Street, but this term is actually a method of debugging code. The term is in reference to a story from a book called The Pragmatic Programmer where a programmer would walk through each line of code and explain it out loud to the rubber duck he’d carry around. It may sound a little silly, but this method can help build a deeper understanding as you explain what exactly each line of code is supposed to do.

This odd term was first coined by Robert A. Heinlein in his book, Stranger in a Strange Land, but over time has found its way into programming lingo. Put simply, to “grok” something is to understand it in a profound and intuitive way—to the point where it becomes an extension of yourself. A programmer who “groks” understands how to tackle a coding problem like most of us know how to balance ourselves when riding a bike without really thinking about it.

Programming languages that take you places

Now that you’ve got a better grasp on “garbage in, garbage out” and some of the other vivid vocabulary of the tech industry, you’re ready to talk like a tech insider. But to actually be a tech insider, you still need to learn the programming languages that are going to get you where you want to go.

Unsure of where to start? Find out which languages are in high demand in our article, “The 14 Best Programming Languages Based on Earnings and Opportunities.”