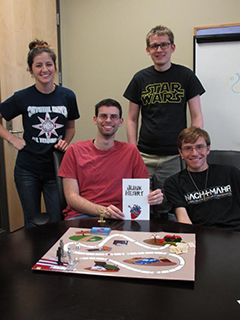 Imagine a futuristic world where humans depend on robots to complete their undesirable tasks. Over time, your robot gets smarter and realizes it’s missing something – rhythm, lifeblood, a definition of living. So, it leaves the factory on a quest to find the one element that defines life – a beating heart.

The board game, called Junkheart, was the brainchild of Rasmussen College School of Technology student, Dane Rickett. He and his fellow team member created the game    in just 48 hours during the Global Game Jam event Jan.    25-27, 2013 at the Rasmussen College Ocala campus.

“My goal is to one day work in game design, so I looked at this [Global Game Jam] as an opportunity to lead a team and design a game from scratch,” said Rickett.

This was Rickett’s first Global Game Jam experience. He was among 18 students from colleges around North and Central Florida to attend the event at the Ocala campus – just one of 300 host sites around the world. At 5:00 p.m. on Friday, Jan. 25, the attendees were given a theme – the sound of a beating heart. Game designers, like Rickett, were then given an opportunity to pitch their game ideas. After voting for their favorite concepts, graphic designers and developers formed into teams of four with the game designers, and they were off!

“The teams had to figure out what that [theme] meant to them and create a game in just two days,” said William Sattelmeyer, Rasmussen College School of Design Program Coordinator. ”The 48 hours pass swiftly, but it’s a good simulation of the time pressure and deadlines in the real world of game production.”

The goal of the event is to finish the game design by Sunday at 5:00 p.m., but in the end there isn’t a declared winner. Sattelmeyer says the idea behind Global Game Jam is to give students the opportunity to collaborate and share ideas.

“I don’t think many of the students realized how much they knew about game development or how successful they would actually be until they did it and saw the process unfold,” said Sattelmeyer.

Rickett agrees it was a great learning experience. He says the event was a nice simulation of what the game design world is really like.

“In class, we create games in 11 weeks and often end up adding more features than we can do,” said Rickett. “It’s hard to stay on top of things when there are so many people involved. At Global Game Jam, we got to work in small teams and give instant feedback.”

While Rickett’s team created a board game, other teams at Rasmussen College created a computer game and games for the iPhone® and Android®. Sattelmeyer says the iPhone game, called Cardio Drop, is very complex.

“Music beats throughout the game and causes blocks to drop on top of hearts,” said Sattelmeyer. “The goal of the game is to put the blocks back in place and keep the music steady. It took a lot of code to create this game.”

“I’ve been drawing pictures since I was a kid; I love it,” said Aamland. “First, I drew all the pictures on paper and showed them to my team. Then, I scanned the pictures into a computer and used Adobe Illustrator® to map out the pictures and coloring. It took about an hour or two for one picture, but it was a lot of fun.”

This is Aamland’s second year participating in Global Game Jam. He says he highly recommends anyone interested in game development to attend next year.

“It gives you a better understanding of how most companies plan and create a game,” said Aamland. “You also make some great friends with similar interests, and it looks great on a resume.”

If anything, Aamland says the event is definitely a rush, and like this year’s theme, your heart is racing at times. His advice for future Global Game Jam gamers:

“Bring energy drinks, a pillow and an inflatable bed,” said Aamland. “Most of use slept on the floor.”

Global Game Jam is the largest game jam in the world, gathering developers from more than 44 countries every year. Last year, more than 2,000 games were created in 47 different countries.

To check out this year’s games, including those created at Rasmussen College, click here.