11 Technology Documentaries on Netflix to Stream in 2019 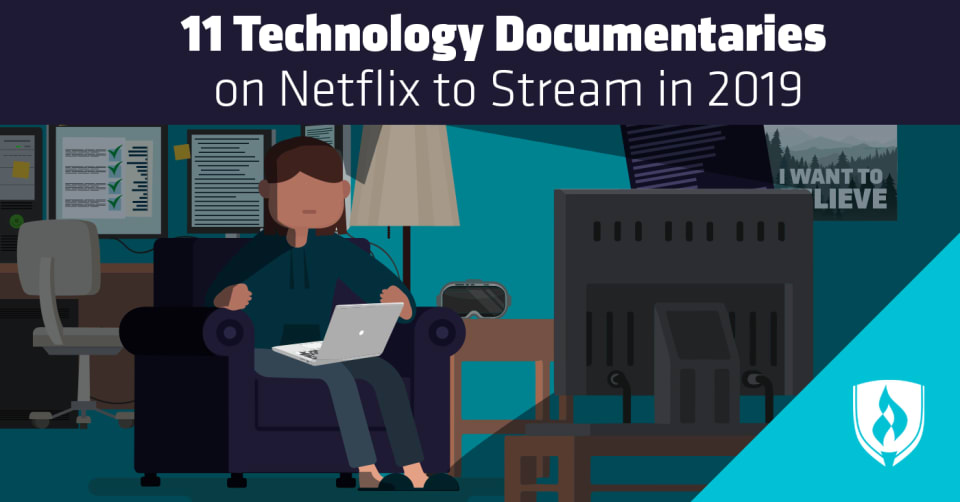 The world of technology has always captured your attention. It doesn’t matter if the topic is coding or artificial intelligence. You’re just as likely to spend a weekend researching the latest tech news as bingeing your latest Netflix obsession.

But you don’t have to choose between Netflix and indulging your tech obsession—you can do both! The next time you’re in need of a relaxing night in, check out these 11 technology documentaries to stream on Netflix.

Break out the popcorn, get comfy and settle in for a solid stretch of intriguing and informative technology documentaries.

11 Thought-provoking technology documentaries to watch in 2019

The world of technology changes fast. We rounded up the most relevant technology documentaries available for streaming on Netflix so you can stay on top of the latest tech conversations. Whether these films were released last year or last decade, they all grapple with technology topics that affect our lives every day.

Most people accept user agreements without question—and without reading the fine print—when they sign up for a new social media account or download the latest app. This documentary takes viewers on a deep dive into the permissions they’re really granting organizations when they accept those terms. You’ll have a whole new outlook on internet privacy after watching Terms and Conditions May Apply.

Before Google and Apple ruled the tech universe, there was Compaq Computer. Silicon Cowboys follows the underdog story of three friends and their tech company that dared to take on IBM in the early eighties. Compaq isn’t around anymore, but it left its mark on the tech industry in ways that still affect us today. Watch this documentary to hear the true story behind one of the companies that made start-up culture what it is today.

3. Lo and Behold: Reveries of the Connected World

In Lo and Behold, filmmaker Werner Herzog considers the impact of popular technology on human life, including the internet, artificial intelligence and robotics. Viewers are treated to interviews with technology leaders such as Elon Musk as this documentary explores the many ways in which tech shapes our lives. Settle in for some existential thinking as you follow technology from the birth of the internet to the unknown future that lies ahead.

This documentary follows the evolution of 3D printing and the race between tech companies fighting to emerge as leaders in this new market. Print the Legend not only traces advancements and achievements in 3D printing, it also focuses on the controversy related to 3D printing and gun rights. This fascinating documentary brings viewers to the intersection of technology, business and political activism in a film you won’t want to miss.

This 2015 episode of the PBS series NOVA investigates the technology of cyber warfare and takes a hard look at existing computer programs that might have the power to take over our world as we know it. No longer part of science fiction, this program takes a look at how the right cyberattack could severely damage everything from our food supply to our cars. Join the NOVA researchers as they tackle hard questions about the reality of cyber warfare—and whether we’re prepared to defend ourselves against it.

You may have heard of Bitcoin as a popular cryptocurrency that’s made waves among tech gurus and financial experts alike. Banking on Bitcoin explores the origins of Bitcoin and its evolution into a global phenomenon. This documentary is a must-watch for anyone intrigued by technology’s impact on the world of economy and business.

This documentary is named after AlphaGo, a computer program developed by Google’s parent company, whose sole purpose is to play the ancient strategy game Go. Viewers follow AlphaGo from development to the ultimate test: a Go tournament against professionals. This thought-provoking documentary will have you pondering the future possibilities of artificial intelligence and what they mean for humanity.

8. Steve Jobs: The Man in the Machine

Steve Jobs has long been portrayed as the living representation of creativity and innovation in the tech field. This documentary takes an in-depth look at the personal life of the man behind Apple, including the factors that led to his long-standing legacy and the widespread grief felt by so many when he died.

“Algorithm” is a hot tech term that’s used widely in relation to systems governing everything from your credit score to the posts you see in your social media feed. But what are algorithms, and how do they work in our digital world? This BBC documentary follows mathematician Marcus du Sautoy as he shows viewers the complexities of algorithms that have been around for thousands of years—and how they continue to touch our lives today.

The Mars Generation introduces viewers to the newest generation of teenagers participating in NASA’s Space Camp in the hopes of someday exploring Mars. Press play on this documentary for insight into the technology that’s expanding our world beyond Earth and takes a look at the young people who are helping this bright future take shape.

Life 2.0 shares the stories of everyday people whose lives are completely transformed by participating in the virtual world of the computer game Second Life. Though this documentary was created nearly a decade ago, viewers might be surprised to recognize a bit of themselves as they consider the line between the online world and reality.

Press play on these technology documentaries

Your weekend plans are all set now that you have these technology documentaries to keep you intrigued and entertained.

Your passion for technology has made for a fun side hobby, but have you ever considered making it a career? Find out if you’d be a good fit with these 8 Signs You’re Wired to Major in Technology.