Web Developer vs. Software Developer: Which Coding Context Fits You? 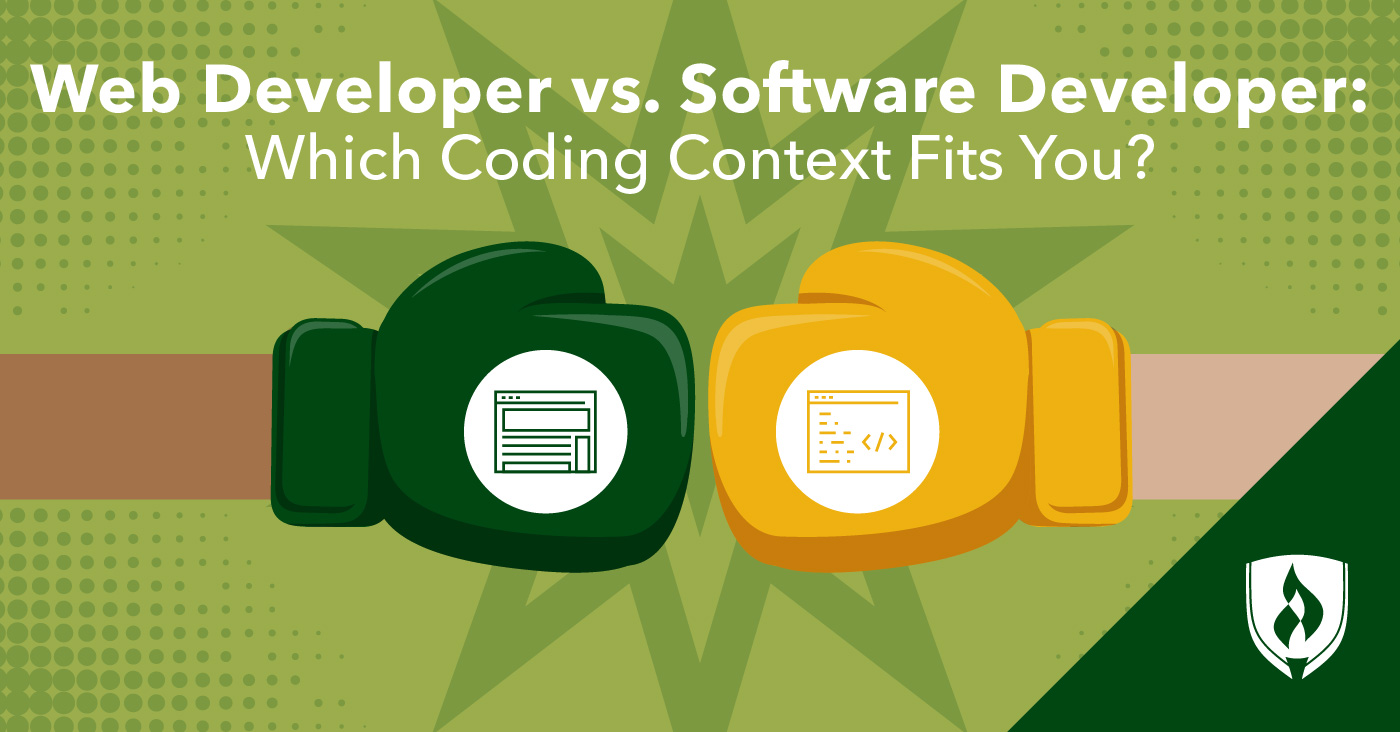 If you’ve been exploring tech roles to potentially pursue someday, the titles can start to blur together. It seems everywhere you look there’s an unwieldy mix of “XYZ” developers, programmers, designers, analysts, engineers and even scientist job titles that all sound vaguely similar. If you’re going to make a career out of working in technology, you’ll want to get a better handle on what these roles are typically responsible for. First off is making sense of the similarities and differences between web developers and software developers.

Web developer versus software developer is an especially challenging comparison for the unfamiliar because they sound like the same role working in two different mediums (websites and software). But the role itself is really quite different in each career. To tell them apart and decide on a direction of interest, you’ll need more information.

We combined research with insight from professionals in both careers to discover what makes web development and software development different. Read on to get a breakdown of each career and to get an idea of which one interests you more.

Put simply, web developers create websites. It’s easy to say, but a bit more complex in the execution. According to the Bureau of Labor Statistics (BLS), these professionals handle the look, usage and functionality of a website.1 They might begin by meeting a client or manager to discuss the needs for a website, then create applications, write code, create graphics or collaborate with graphic designers, integrate content and monitor website traffic and performance.

If you consider the many different types of websites—a clothing shop website, a gaming site, a news platform, etc.—you’ll get an idea of the broad skill set web developers use to make a client’s vision reality. In fact, the world of web development covers enough ground that many web developers focus on mastering a portion of the potential work, particularly when just getting started. “Front-end” web developers are those who focus primarily on the outside appearance and layout of a website, while “back-end” web developers focus on the behind-the-scenes code that ensures a site’s functionality. For a more detailed breakdown, check out “Front-End vs. Back-End Development: Which Side of the Screen Are You?”

Software developers build computer programs. According to the BLS, these professionals develop either applications or the underlying systems that run a device or control a network.1 To do this, they might analyze user needs, then design, test and develop software to meet those needs. They create models and diagrams to instruct computer programmers to write the necessary code—or software developers might write the code themselves. These professionals will test and monitor what they create to ensure the program functions normally and to keep a reference document for future upgrades.

“Web development is very clearly a job where you are making websites and web apps,” says Chris Castiglione, web developer and teacher at One Month. Web developers utilize a diverse skill set, combining artistic elements like design sense with technical skills like coding and a whole lot of interpersonal ability to figure out what clients and web users need. They use this wide array of abilities on basically one type of thing—a website.

On the other hand, software developers work on many different kinds of things—desktop applications, mobile applications, data analytics tools and really any program that you can think of that’s made with code, according to Castiglione. But the skills they use to make that happen are a bit more streamlined in the technical world.

The project lengths are also a common distinction here. Garrett Perks, founder of EvenVision says web developers tend to work with more projects and clients in a given time frame while software developers tend to focus in on one project for a longer stretch.

“Web development will often require more flexible communication abilities and the ability to work successfully in an environment where clients can drive variations—sometimes big ones—in the experience of one project to the next,” Perks says. “Whereas software developers are going to spend longer segments of their career on single projects.”

After those descriptions, you might be feeling your interest drift closer to web development or software development, but potential salary and job outlook are also big factors in choosing a career direction.

The median annual income for web developers in 2020 was $77,200, according to the BLS.1 Employment prospects for web developers also appears to be strong, with the BLS projecting a 13 percent growth in employment between 2020 and 2030—a rate of growth much higher than the average.1 This sunny forecast for web developers has a lot to do with the rising patterns of online shopping as well as the demand for websites that perform well on multiple types of devices.

So how does that stack up? The BLS reports software developers made a median annual income of $110,140 in 2020.1 The job outlook for this career also appears strong, with a projected growth in employment of 22 percent through 2030.1 The BLS attributes this promising trajectory to an ever-increasing demand for software across almost all industries. For example, smartphone and tablet technology are in high demand, as well as software in industries like health insurance and cybersecurity that can meet new challenges in our digital age. The BLS also notes that more computer systems are being built into consumer electronics and other products, such as cell phones and appliances, which will also create room for more software developers.

As with much of the tech industry, both of these careers offer entry-level and extremely advanced or specialized positions. The salary and opportunity can vary widely depending on your employer and level of experience, but the rising demand in both careers offers an ideal playing field for professionals looking for long-term career options.

Web developer vs. software developer: How to choose?

If you could see yourself in both of these careers, it might help to think of certain differences in the daily life of the job. Perks notes that web developers are likely to experience rotating projects while software developers will spend more time with one endeavor. “This can be good or bad, depending on personality,” Perks says.

“Some people will thrive off of variety and continual flow of new and interesting projects; they will get that in web development.” But Perks says those who prefer digging into one project, and keeping in line with one brand will be much happier in software development.

Another factor that could help you make a decision is the difference in the breadth of knowledge versus the depth of knowledge typically needed for each field.

“Web developers today are typically ‘full stack’ developers,” says Troy Shafer, owner and lead consultant of Shafer Technology Solutions. This means that while many web developers may have an expertise in front-end or back-end, they often need to have a solid grasp on how all elements of web development work together.

“Software developers typically have one language, sometimes two, but usually one they will focus on,” Shafer says. “They usually don’t have to know a ‘full stack’ to accomplish their task, and they need to be more verbose in their coding.”

Web developers often need to know a handful of coding languages, and might even use all of them in one project. But software developers take a deeper approach to their work, using fewer programming languages to integrate their work deeper with the technology and operating systems, according to Shafer.

Web developer vs. software developer: Your career in the making

If you are still unsure which field you’d prefer, it isn’t the end of the world. “If you choose one, and don’t like it as much, the good news is you’re not stuck!” Castiglione says. “Especially these days since there is so much crossover between languages.”

If you learn Python® and JavaScript®, for example, it would be easy to find work with both of those two roles, Castiglione explains. “If you want to test the waters, go to conferences. See what kinds of people you meet, and listen to the talks of the day.” Getting a vibe for each industry is a great way to decide where you want to go, and it can lead to helpful connections.

By now you know a little more about web developer versus software developer in terms of career, but this overview is just scratching the surface of what you’ll want to know about these two in-demand careers.

If you’re looking to dip a toe into both, the Rasmussen University Software Application Development Associate’s degree program includes courses for building a solid foundation in  both software and web development. Sound like a good fit? Visit the degree page to learn more about this convenient, fully-online option.

1Bureau of Labor Statistics, U.S. Department of Labor, Occupational Outlook Handbook, [accessed September, 2021] www.bls.gov/ooh/. Information represents national, averaged data for the occupations listed and includes workers at all levels of education and experience. This data does not represent starting salaries. Employment conditions in your area may vary.