9 Famous Nurses Who Made Their Mark on American History 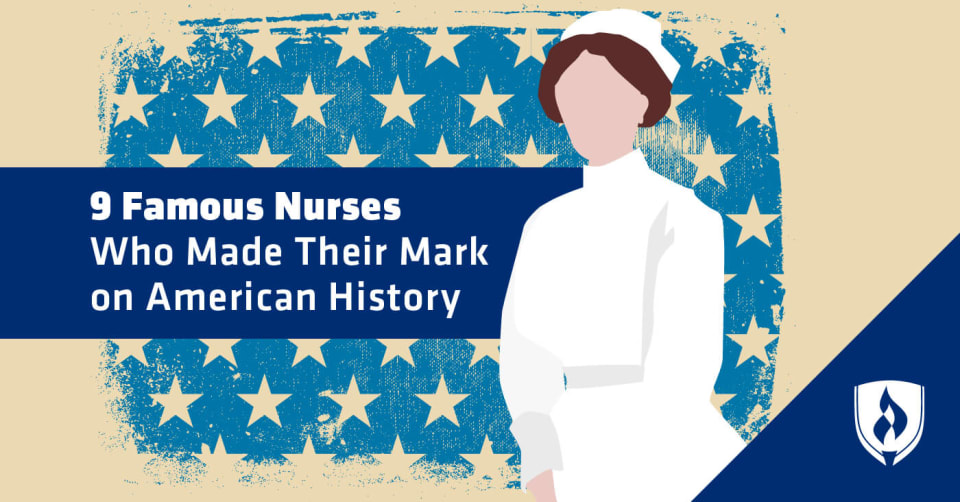 It’s no secret that nurses impact hundreds, if not thousands, of lives during the course of their careers. But some nurses have left behind a legacy that goes beyond the patients they served. Plenty of famous nurses have changed the course of history thanks to their dedicated work!

Unleash your inner history buff and get to know these nine famous nurses who influenced the history of America. You’ll be fascinated by the impact their hard work and accomplishments have had on an entire nation.

Mary Ezra Mahoney was the first African American woman to become a registered nurse. She proved her nursing skill by being one of only four graduates (out of 42 candidates) from her class at the New England Hospital for Women and Children.

Though she faced discrimination throughout her career, Mahoney began her own private practice. Her success led her nursing school to adopt more accepting policies toward African American nursing candidates. In 1908, Mahoney cofounded the National Association of Colored Graduate Nurses when the National Nurses Association refused to accept black members, pioneering the way for future African American nurses.

Lillian D. Wald is one nurse who led a life of service, using her knowledge and talents to help as many people as possible. She was immediately struck by the poverty she witnessed in New York after her graduation from nursing school.

She became an advocate for public health, founding both the Visiting Nurse Service and the Henry Street Settlement to provide aid for those in need. Wald was also an advocate for women and children, establishing the Women’s Trade League Union in 1903 and lobbying to end child labor. She eventually founded the Children’s Bureau in 1912.

The wife of major-league baseball star Jackie Robinson may have had a famous husband, but Rachel has influenced history in America in her own right. Not only were she and Jackie actively involved in the Civil Rights movement, she also kept a focus on helping others throughout her nursing career.

Robinson eventually directed the nursing program at Connecticut Mental Health Center and worked as a professor at Yale’s School of Nursing. She established both the Jackie Robinson Development Corporation, to provide low-income housing, and the Jackie Robinson Foundation, which offers scholarships to students of color.

Mary Walker was an assistant surgeon in the Civil War who went on to make a big difference for the women of America. During her time serving in the Civil War, Walker was captured by the Confederate army and was later awarded the Congressional Medal of Honor — the first and only woman to receive the award.

After the war, Walker became an outspoken proponent of women’s rights, advocating for the right to vote and for less constricting dress.

It’s impossible to list nurses who have changed history without mentioning Clara Barton. Though she’s most famous for founding the American Red Cross in 1881, Barton spent much of her life working to aid anyone in need.

Not only was she known as the “angel of the battlefield” for her nursing work during the Civil War, she also gathered and distributed supplies to soldiers during the war and helped reunite missing soldiers with their families after the war had ended.

Faye Wattleton is a modern-day nurse who’s made big waves with her advocacy for women’s health. Much like Lillian D. Wald, Wattleton was forever changed by what she saw while living in New York, pursuing her master’s degree in infant and maternal care.

There she saw the devastating effects of illegal and unsafe abortions. She soon became an advocate for women’s reproductive health, actively lobbying to legalize abortion. Wattleton made history in 1978 when she became the first African American, first female and youngest president of Planned Parenthood.

After the war, Bickerdyke continued helping veterans by procuring legal assistance for veterans and nurses who were still waiting for their pension from the federal government.

Florence Blanchfield was not only a dedicated military nurse, she also worked tirelessly to obtain equal rights for women in the military. Blanchfield joined the Army Nurse Corps in 1917 during WWI and continued to work in army hospitals around the world until the 1930s.

As she rose through the ranks, she became more upset with the unequal pay for women in the military and unfair policies, such as discharging military nurses who decided to marry. She fought for full rank and payment for military nurses and finally succeeded in 1947.

Jane Delano began her career as a teacher, but she soon realized that her true calling was nursing. After graduating from Bellevue Training School in 1886, she worked in Florida before moving west to Arizona, battling epidemics of yellow fever and typhoid along the way.

In 1909, Delano became the superintendent of the Army Nurse Corps as well as chairman of the National Committee on Red Cross Nursing Service. She spent the remainder of her life creating programs to improve nursing care, including recruiting nurses for emergency services with the Red Cross and co-authoring a textbook on proper hygiene and caregiving in the home.

Ready to join their ranks?

Have these famous nurses inspired you to join this rewarding career field? You could be the next influential nurse to make a difference! And even if your name is never printed in the history books, you will surely become someone's hero! Get a taste of the impact you could have on your patients' lives in our article: Patient Perspective: 3 Moving Stories that Say 'Thank You' to Nurses.