Nursing Pinning Ceremony: A Rite of Passage for Graduates 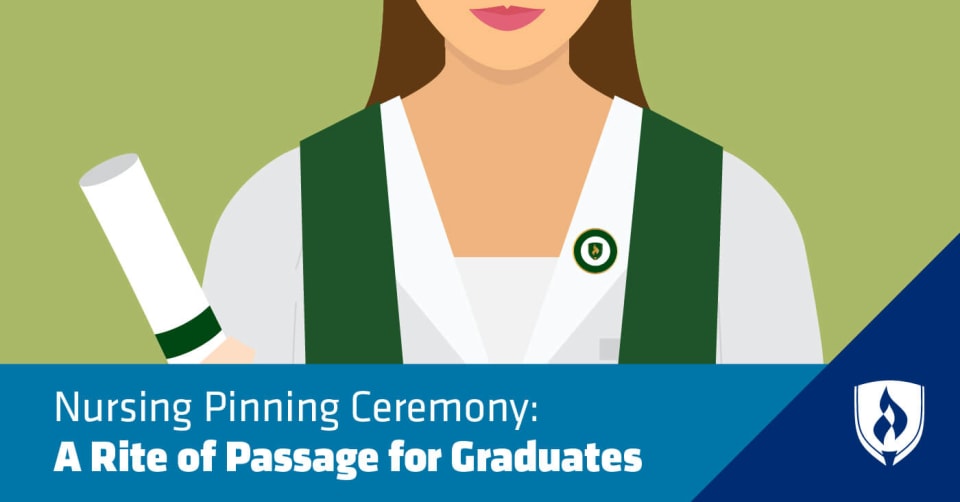 Imagine a large room full of hundreds of people with happy tears in their eyes supporting someone who spent the last few years completely dedicated to earning their nursing degree.

These emotional families and friends are at a pinning ceremony where newly graduated nursing students are presented with a special nursing pin from their college’s faculty as they are welcomed into the nursing profession.

This is the nursing pinning ceremony, a rite of passage for nursing graduates through the ages, says Tammie Rogers, Dean of Nursing at the Rasmussen University Wausau campus.

Why have a nursing pinning ceremony?

“I could not wait for this moment. It felt like a dream. Then, after all the passed tests, exams and clinicals, finally it came true—the day of my pinning ceremony,” recalls Renata Jankowska, RN. “Overall, it was a deep, meaningful event and a true testament to our profession. I found it to be a meaningful celebration of my accomplishments that I enjoyed with my family, friends and fellow classmates,” she adds.

And pinning ceremonies aren’t just for the students and their loved ones—their instructors also relish in the accomplishments of their pupils. “For instructors and deans, it is by far the proudest moment to see a student succeed and reach their goals,” says Dean Rogers.

This nursing tradition is an important celebration for new graduates on the brink of entering their nursing career.

What does a nursing pinning ceremony entail?

Nursing pinning ceremonies are a celebratory endcap to a nursing student’s academic career. But what happens during the ceremony itself?

Beforehand, students invite their family and friends to join them in celebration at this special event. The nursing student selects a significant person in their life to dedicate the pin to. On the day of the ceremony, those individuals accompany the graduates onstage. A faculty member hands that person a pin, and they in turn place the pin on the graduate to show they have accepted the graduate’s dedication. During the process, a faculty member will read the dedication from the student to the person of significance, which is typically a very emotional portion of the ceremony.

Students can expect to hear the history of the pinning ceremony and a nursing faculty member will address the cohorts, according to Dean Rogers. There is also a candle- or lamp-lighting portion of the ceremony, which commemorates Florence Nightingale’s history of helping wounded soldiers at night by candlelight, Jankowska explains. During this time students will typically either recite the Nightingale Pledge or the International Council of Nurses Pledge.

History of the pinning ceremony

Historians can actually trace the tradition back to the Crusades of the 12th Century, when a group of knights tended to and cared for the injured and suffering crusaders. When new monks were brought into the Knights Order, they decided to continue helping sick soldiers and held a ceremony where each monk was given a Maltese cross that they wore on their arm.

Fast forward to the 1860s, when Florence Nightingale was honored with the Red Cross of St. George for her selfless efforts to injured men during the Crimean War. Because she believed in acknowledging a job well done, she presented a medal of excellence to her hardest working nursing graduates. However, by 1916 it became standard in the U.S. to no longer award only a few nurses with a medal of excellence, but instead all nursing graduates with a pin during a special ceremony. The pin was provided by the hospital school of nursing to the students to identify them as nurses and act as proof of their education.

Is the end of pinning ceremonies drawing near?

There are schools throughout the nation that have decided to forgo the pinning ceremony, calling it out-of-date and unnecessary. Some schools have done away with it completely, and others have their nursing students raise money, plan and carry out the ceremony all on their own.

“I think it is unfortunate,” Dean Rogers says. “The pinning ceremony is often remembered even more than the graduation ceremony. It’s a time to celebrate the nursing student’s success and the amount of dedication and effort a student has put into their nursing education.”

A nursing pinning ceremony isn’t just a tradition—it’s an important symbol of nursing students’ hard work and dedication. It’s a time for students to come together and celebrate with their classmates and loved ones. Most importantly, this pivotal moment represents their transition from student to full-fledged nurse.

If your nursing pinning ceremony is drawing near, are you ready for what’s next? Gear up to land your first job with the perfect cover letter and resume for new nurses.

Follow our Rasmussen University Nursing blog to keep up to date on everything nursing-related!

EDITOR'S NOTE: This article was originally published in December 2012. It has since been updated to include information relevant to 2016.