5 Futuristic Technology Examples That Will Freak You Out 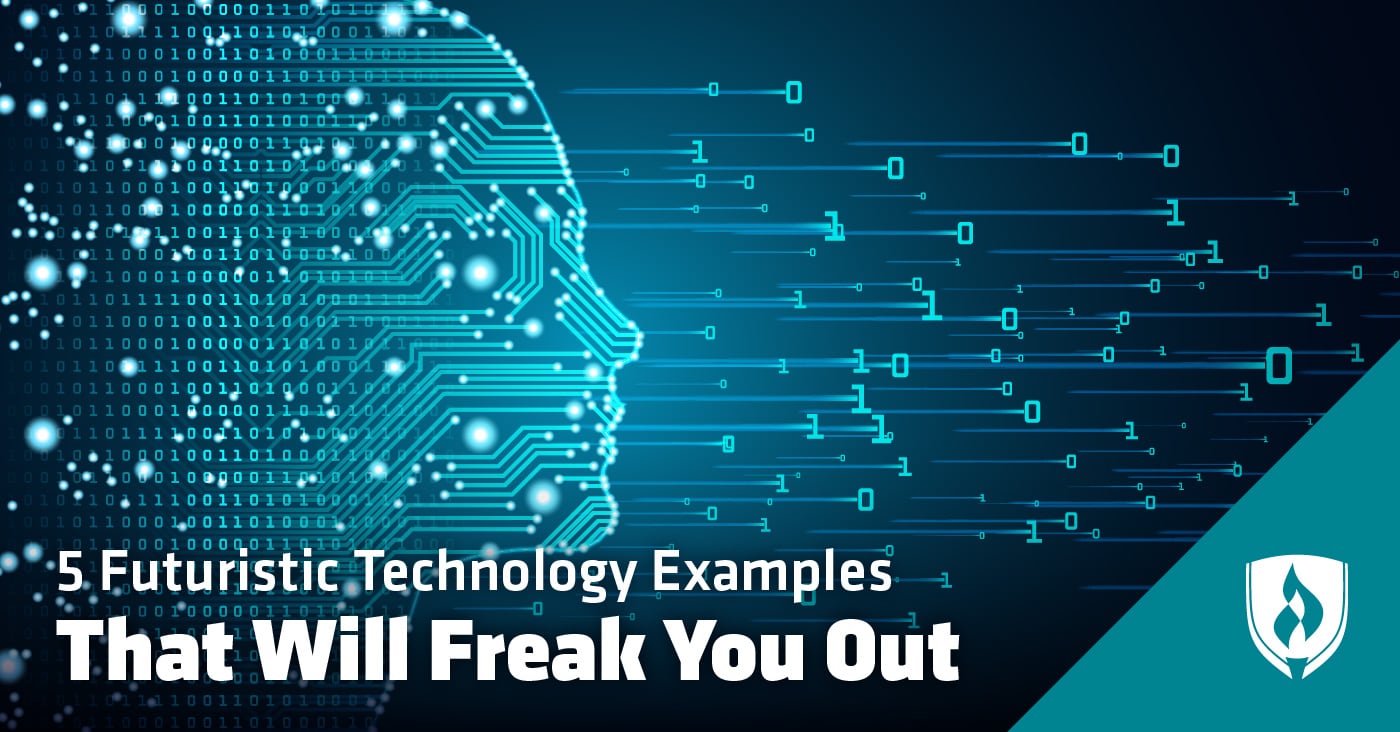 But as the wheels of technological progress keep spinning along, are any of these scary futuristic technologies any closer to becoming a reality? If so, are they really as scary as they sound?

We identified some of the new or emerging technologies that are enough to have anyone on edge. Keep reading to familiarize yourself with some of these futuristic technologies and figure out if the fears are excessive or acceptable.

Why we’re freaking out: As machine learning and AI-like systems become more and more refined, the cold, calculating logic powering their decision-making process could decide to do a variety of awful things — particularly if given broad control of infrastructure or defense systems. What makes us human — both the good and bad of our emotions and sometimes irrational thinking — could be seen as a detriment to the world in the view of an AI-controlled network. Worst case scenario, imagine a real-life version of the movie Terminator.

Why we’re not: We’re still a long way from a true artificial intelligence. Being able to ask a question and have a computer quickly scan vast databases for the most likely correct answer, while impressive, isn’t close to a freely thinking sentient being. Also, the doomsday scenarios outlined aren’t exactly overlooked — safeguards can be implemented to stop an artificial intelligence network from deciding humans are a problem.

Why we’re freaking out: It’s not hard to imagine how the allure of spending your time in a perfect, immersive virtual world could strain our ties to the real world. Personal relationships could lose value, eventually leading to a breakdown in society as we know it.

Why we’re not: Admittedly, it’s hard to project just how big of an impact a new form of entertainment will have. After all, the printing press was met with concerns, and it turned out to be just fine. Virtual reality usage could just have parallels to video games — most will take part in moderation, while some go overboard. The percentage of people going to the extreme is nearly impossible to predict.

Why we’re freaking out: There are multiple concerns with driverless technology. First is the ethical dilemma: When faced with an unavoidable accident, should a driverless car carrying a family of four attempt to swerve to avoid a child who runs out into the road? There’s still a ways to go in programming a vehicle to determine what takes priority. Another potential nightmare scenario would be hackers virtually hijacking a vehicle and endangering the passengers inside.

Why we’re not: Self-driving vehicle technology is still in its infancy. Many of the challenges facing it have more to do with society needing to adapt with laws or regulations that force self-driving vehicles to do the least amount of harm possible. Many of the fears surrounding autonomous vehicles have more to do with unrealistic expectations — they may not prevent all accidents, but they could have the potential to be much safer than letting emotional and irrational humans drive (especially during rush hour!)

But is the concern about driverless vehicles being hacked overblown?

“No, not at all,” says James Piedra of Lanner Inc., “Cars have been hacked for years now, with many recent examples of [attacks] on smart cars.”

As of now, an internet connected car being hacked is of relatively minor consequence. But as driverless technology continues to develop, it’s imperative that increased security measures are put in place to safeguard against some seriously scary scenarios.

Why we’re freaking out: Unlike some of the technologies on this list, ransomware is already invoking fear because it currently exists. These attacks typically involve hackers breaking into a computer network and then encrypting valuable data which can only be “unlocked” after paying a sizable ransom. These attacks cripple organizations in two ways — first with the actual ransom and second in the loss of productivity.

Why we’re not: While these attacks may not ever be completely eliminated, more is being done to prevent them. The prevalence of these attacks has helped increase demand for information security professionals who can help prevent, and in the case of a breach, limit the damage inflicted.

Why we’re freaking out: It doesn’t take much to understand why a malicious attack on vital infrastructure systems like a power grid or traffic controls could lead to chaotic circumstances. Worse yet, some of these systems are woefully under-protected.

Why we’re not: Because there isn’t much visibility into the details of these vulnerabilities, some argue that the gap in information is often filled with hyperbole. Even if some of the more eye-catching reports on infrastructure vulnerabilities are a bit overstated, this is a critical issue that has caught the attention of the U.S. government. The Cybersecurity Act of 2015 shows steps are being taken to modernize and improve information security across the country. Others are pushing for the government and private businesses to offer “bug bounties” for discovering security vulnerabilities.

No need to fear

These examples of futuristic technology might leave you feeling a little uneasy, but that’s no reason to give up hope! Many of these doomsday scenarios can be eased with an increased emphasis on information security, and companies are starting to go all-in on cyber security measures.

In fact, information security analyst jobs are projected to increase by 18 percent by 2024, according to the Bureau of Labor Statistics.

The world clearly needs more cyber superheroes. If you’re interested in joining the battle to help ease the fears of many, learn more about the next steps in our article: How to Become an Information Security Analyst?