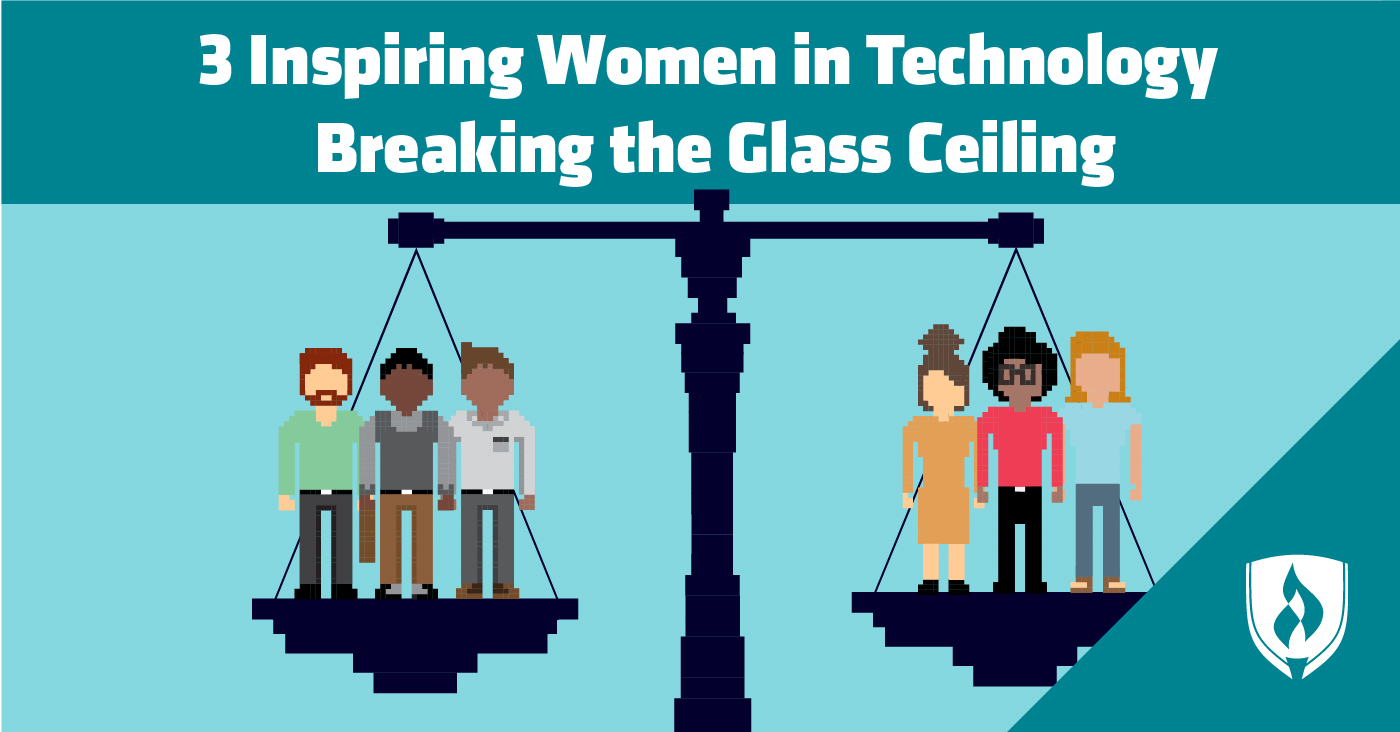 Since 1950, the percentage of women participating in the labor force has grown steadily from around one-third to approximately 60 percent, according to the Bureau of Labor Statistics.1 Along the way, women have taken tremendous strides over the years to achieve equal representation in the workplace—even in fields that have been historically male-dominated, such as business, law and medicine. Progress has been slower, however, in STEM industries (science, technology, engineering and mathematics).2 This is particularly true for the fields of engineering, computer science and physics.

With this in mind, many wonder what exactly is holding women back from success in the field of technology. Does it come down to a lack of opportunity, based at least in part on gender discrimination? Or are female candidates simply not seeking out positions in technology? There’s a lot surrounding this topic to consider and unravel.

Join us as we dig into the facts surrounding the gender gap in technology and speak to three trailblazing professionals who spend their working days proving that the damaging stereotypes about women in technology are wrong.

Why are there so few women working in technology?

A study conducted by the American Association of University Women (AAUW) has looked into the facts surrounding women in STEM fields. The report sought to answer the ever-important question, “Why so few?”

It was found that, among other contributing factors, much of the under-representation of women in STEM fields correlates directly with the learning environments experienced in childhood. The report shows that, for example, negative stereotypes about girls’ abilities in STEM fields can actually impact students’ test performance.2

Fast-forward to adulthood and we’re seeing women hold about a quarter of all jobs in the technology sphere, despite there being no clear difference in their capability as compared to men. Even still, women are not only hired at lower rates than men, but they also leave the tech industry at reportedly more than twice the rate men do.3

Of course, there are a lot social and cultural issues at play when examining why women haven’t found an equal footing in the tech industry. Both overt and latent sexism have played a part in making the road for women in tech difficult. Harassment, general disrespect and the potential for fewer opportunities are all documented issues that may leave some women hesitant about the field.

While the history of the tech industry has not always lent itself toward gender equality, there are many skilled and passionate women in technology who are devoted to bucking those trends and paving a new way forward. Consider the stories of these three inspiring women.

3 Women in tech who are breaking barriers

With all of the potential hurdles women face in tech, does it take a superwoman to succeed in the field? You may be surprised—the following women in tech claim no superpowers but all have made excellent strides in the field. Read on to learn more about their experiences in the field.

1. Software developer overcomes fears in her rise to the top

Alena Kastsiukavets discovered a passion for writing code when she was in high school. “My father accidentally bought a CD-ROM with a basic course on software development in Visual Basic™, and I spent all evenings exploring the CD,” she reminisces. “This was the moment when I finally realized software development is what I wanted to do in life.”

Kastsiukavets is now a lead .NET developer at ScienceSoft. In fact, she’s one of just three female developers on a team of 45 specialists, and the only one who has advanced to a lead position. But she didn’t always see a successful technology career as an option for her.

“In the beginning, I almost gave in to the general assumptions that girls were ‘bad at computers’ and not welcomed in this male-dominated field. I was really afraid that it could be the wrong choice and I would not ever be able to succeed in my chosen profession,” Kastsiukavets recounts. She considered some alternate career options, but ultimately chose to follow her dream despite the gender-related barriers that stood in her path.

Generally, she says, people are surprised when they learn that she’s a software engineer, but Kastsiukavets was happy to see that most of her fears about joining the tech industry quickly dissolved once she was able to prove her abilities. She notes that developers who are truly above-and-beyond skilled in their professional work are rare. “I’ve proven to have stronger skills than many [other] developers, and this helped to earn respect among my colleagues,” Kastsuikavets says, adding that the experience has also helped to boost her confidence.

Near the start of her career in the banking industry during the 1980s, Paula Sanders found herself working with word processing workstations as they first entered the enterprise. After teaching an adult night school class in Electronic Word Processing, she landed her first full-time IT job. “I had a natural talent for understanding how products and technology worked and developed strong relationships with colleagues and customers,” Sanders says.

At that time, it was rare to see women in professional technical roles. “At the time, I remember striving to quickly acquire broad and deep knowledge of the products and related technologies in order to ‘prove myself’ to my male counterparts,” Sanders recalls. And prove herself she did—but another hurdle presented itself when she started her family.

While she found that taking time off to raise her young children was an easy decision, it proved difficult for Sanders to jump back into her tech career. She found that a lot had changed in the world of technology during her five-year hiatus, but she also knew that her approach didn’t have to mirror the beginning of her career.

“In the early days, I felt there was a constant need to prove myself, and I went above and beyond to obtain an equal presence and ensure that my voice was heard,” Sanders says, explaining that she now feels she’s on more of an equal playing field and has gained the respect she deserves from male colleagues.

Now working as the vice president of global customer enablement at ABBYY, Sanders is resolute in her choice to pursue a career in technology. “I truly feel that working in technology brings goodness to the world,” she maintains. “The solutions I’ve sold and delivered over the years make people more efficient and effective in their work.”

3. Self-taught tech maven makes a name for herself in niche market

Gaby Roman did not get her start in technology. After studying film in school, she worked as a post-production video editor in New York City. But a seemingly small idea for a new app changed everything for her.

“At the time, I knew absolutely nothing about building applications or software, but I was determined to build a working version of my app without having to outsource the whole project to an agency or developer,” Roman says.

After a lot of time spent learning, testing, troubleshooting and retesting while trying to build her app, she began to realize how much she enjoyed doing that kind of work. “One thing led to another, and I’m now running a full-fledged business teaching non-tech students how to build their own software,” Roman reveals. She is the co-founder of Coaching No-Code Apps.

As a female entrepreneur in the tech industry, Roman has faced her share of hurdles. “I’m the only woman I know of who’s running this type of business. It’s very male-dominated,” she says, explaining that it can catch certain types of people off guard because they’re unaccustomed to a woman teaching them about tech-related things.

Looking back, Roman can acknowledge how far she’s come. “When I first started out, I placed myself at a lower standard than I really should have. I didn’t know my own value, to be honest,” she recounts. “After about a year working in the space, though, I decided to make a big change—both in how I looked at myself and how I presented my business. The gender gap has only spurred me to push past these ‘boundaries’ with more and more force.”

Will you inspire with your own tech success story?

You may find yourself drawn to the idea of a promising career in technology, but you’re continually deterred by the statistics and opinions related to the gender gap in tech. If so, let inspiring stories like the three highlighted above help boost your belief in your ability to succeed in a male-dominated industry like technology.

Feeling motivated to take a step toward tech? There are a number of different paths to pursue within the umbrella of technology. If you’re looking for help in narrowing down your options, check out our interactive guide “Which Tech Degree Is Right for Me?”

1Bureau of Labor Statistics, U.S. Department of Labor, Women In the Workforce Before, During, and After the Great Recession [accessed March 2019] https://www.bls.gov/spotlight/2017/women-in-the-workforce-before-during-and-after-the-great-recession/pdf/women-in-the-workforce-before-during-and-after-the-great-recession.pdf
2American Association of University Women, Why So Few? Women in Science, Technology, Engineering, and Mathematics [accessed March 2019] https://www.aauw.org/files/2013/02/Why-So-Few-Women-in-Science-Technology-Engineering-and-Mathematics-executive-summary.pdf
3The Atlantic, Why Is Silicon Valley So Awful to Women? [accessed March 2019] https://www.theatlantic.com/magazine/archive/2017/04/why-is-silicon-valley-so-awful-to-women/517788/