Is There a Problem with Diversity in Tech? What Minority Tech Hopefuls Should Know 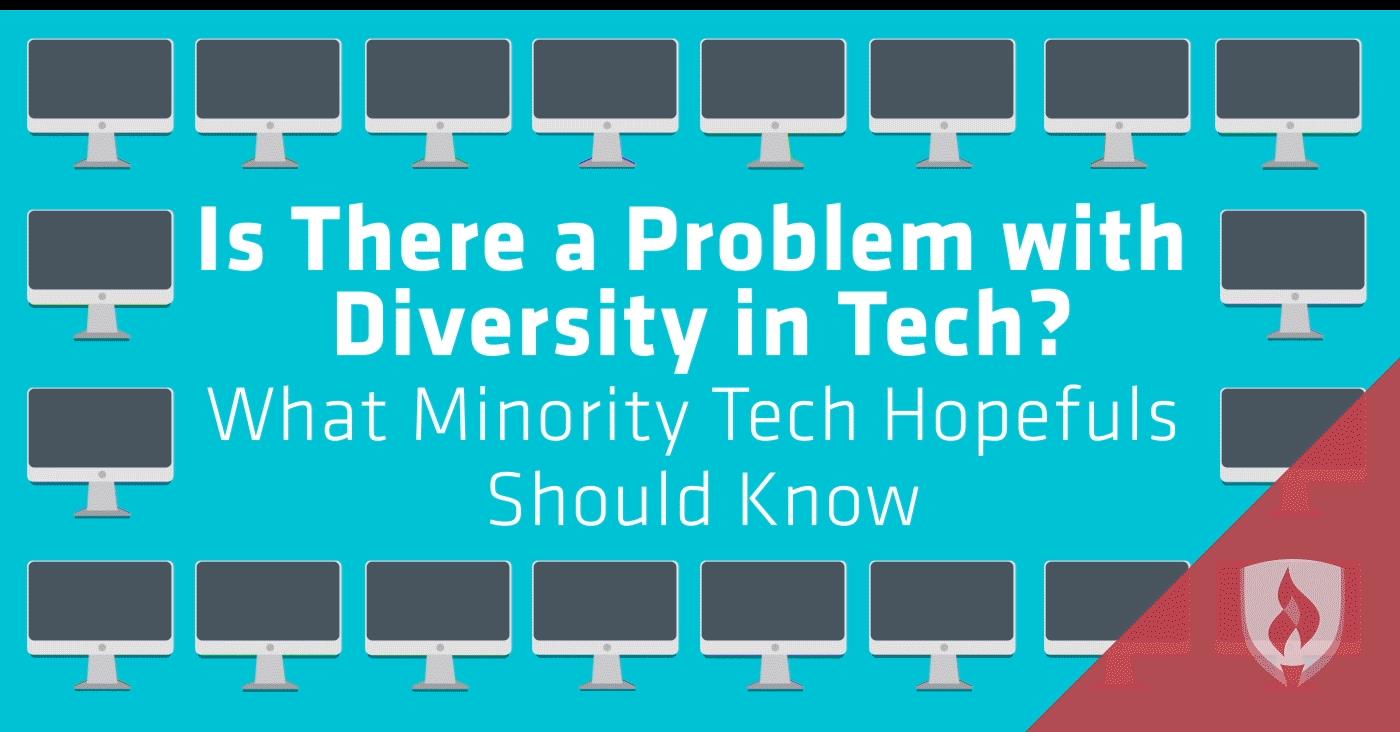 It seems like the tech industry has everything going for it. Not only does this booming field boast laid-back work environments with energetic start-ups, the tech industry is also an economic powerhouse. The Bureau of Labor Statistics (BLS) reports that high-tech industries contributed $7.1 trillion to the economy and accounted for 16.9 million jobs in 2014—that’s 12 percent of the total US workforce.

Despite all the positives, there’s a lingering sore spot in the technology world: A lack of diversity. The tech industry has long been accused of favoring white males in their hiring practices, especially in executive positions where white men make up 83.3 percent of jobholders, according to the Equal Employment Opportunity Commission (EEOC).

What is causing the lack of diversity in tech?

The lack of diversity in tech is a complex issue, and is one experts have been trying to pin down for years. So why is it still an issue? There are a few reasons the tech industry continues to lag behind in diversity.

The technology industry as we know it began in 1981, when IBM debuted its first personal computer. This was the launching point for the technology industry, paving the way for new innovations and rapidly advancing computers. Who were the people behind these developing technologies?

This has led to a “founder effect,” in which the tech start-up culture is most favorable to people similar to those who began the movement. Since the tech industry was developed by straight, white men, it’s tough for those who don’t fit that profile to break into the club.

Tech companies often cite a lack of qualified candidates when they’re accused of bias against minorities. They argue that minorities in underserved communities aren’t as likely to get involved with STEM in higher education, so they can’t land coveted tech jobs.

The problem isn’t just that minorities, particularly those in economically struggling communities, have less access to education and resources. It’s that the recruitment pipeline often takes them out of the running before they’re even interviewed. The New York Times reports that the hiring process used in the tech industry favors white and Asian candidates above other races by using recruiting from information sessions that minority candidates are unlikely to attend.

Some minorities who do make it into the tech industry are leaving “to avoid facing non-inclusive work environments,” according to the Center for American Progress. The EEOC reports that 32 percent of women in high-tech fields feel “stalled” and likely to quit within a year. Of workers of color age 45 and under who hold a STEM-related degree, 15.5 percent of women and 13.1 percent of men are working in a field unrelated to their degree. This is in stark contrast to the 7.4 percent of white male tech workers 45 and under—and while it’s not entirely clear what the root cause of this disparity is, it does seem to indicate people of color are willing to look elsewhere instead of fighting against the tide.

Though it’s been well-documented that tech companies are lacking in diversity, a recent survey reports that most tech employees feel their companies are already diverse. This mass exit of minorities from the tech industry may reflect policies or systemic bias that are unwelcoming to them.

Steps in the right direction

Critics say the tech industry hasn’t done enough to fix its diversity problem and that companies rely too much on outdated strategies, like diversity training, that aren’t making a dent in the lack of diversity. However, some experts believe start-ups are finally having a wake-up call.

“Increasingly, the tech industry is acknowledging that its trajectory is unsustainable,” Holifield says. “Without more contributors to the industry, which requires more diversity, the industry risks becoming less competitive over time.”

New initiatives seek to transform company culture into an inclusive environment, rather than just fill a required number of minority positions.

“There are many new initiatives that aim to promote diversity and inclusion in the tech sector; Project Include is most notable,” Behrmann says. Other grassroots organizations are also helping tech companies become a welcoming place for minorities.

Holifield adds that the tech industry is doing what it can to fix the pipeline problem. Companies are adding Historically Black Colleges and Universities (HBCUs) to their recruiting rounds and are supporting STEM education through coding camps. “[These steps] are designed to provide more competitive skills to underserved communities,” Holifield says.

More work to be done

These baby steps are taking the tech industry in the right direction, but they may not be enough to give minorities their place in the majority-dominated world of technology.

“There needs to be a public/private partnership investment in building new community systems that, over time, will yield far more competitive prospects who become not only tech employees, but also job- and wealth-creating tech entrepreneurs,” Holifield says.

The Center for American Progress agrees that there’s more work to be done. They call for policy changes that both hold companies accountable to their diversity goals and reward them with incentives for maintaining an inclusive company culture. Comprehensive diversity plans and dedicated diversity managers could help tech companies see lasting, positive change.

Next steps for minorities in tech

Minorities interested in STEM shouldn’t be intimidated or discouraged about breaking into the tech industry. There are several steps they can take to improve their chances at landing a tech career.

“My advice is to mobilize and join the new multitude of groups that promote the inclusion of minorities in the tech sector,” Behrmann says.

These groups provide networking opportunities and other resources that can open career doors to the tech world. “These groups also help candidates select companies that prioritize the need for a diverse workforce.”

“The tech industry is competitive—one of the most competitive industries in the world,” Holifield says.

He recommends a solid education in STEM, as well as developing your creativity through exposure to the arts.

“I have confidence that, over time, the [more] competitive prospects that emerge from diverse communities, the more opportunities there will be for tech careers.”

Are you ready to take on the tech world?

Organizations and leaders are paving the way for minorities to break into the tech industry. By working hard at your goals and achieving a strong education, you could be next to break through barriers of diversity in tech.

With the industry heading in the right direction, there’s no better time to pursue a tech career. Learn more about the various career opportunities in our article, "8 Careers in Technology That Keep the World Moving Forward."