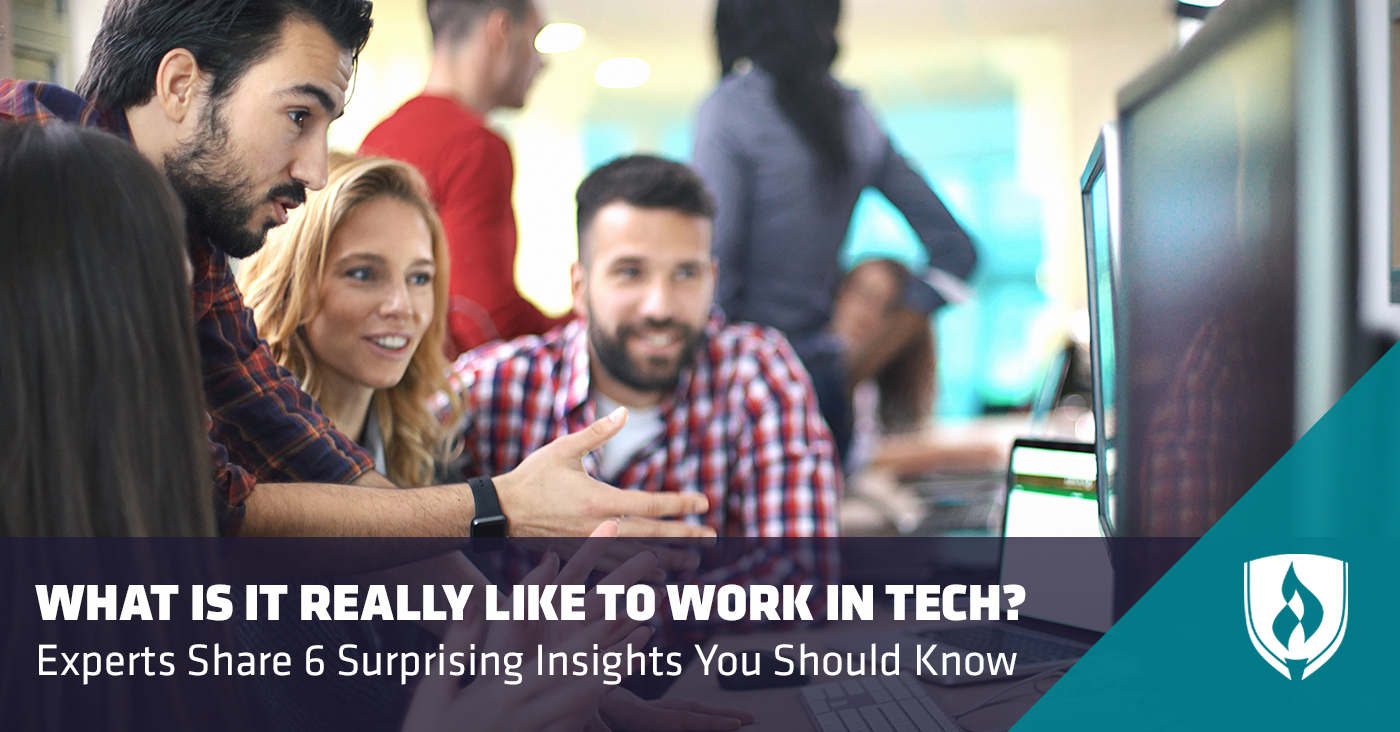 You don’t have to look far to find appealing reasons to work with technology—in-demand jobs, generous pay and advancement opportunities often top the list. But you’ve also heard the tech industry has some downsides that maybe have you thinking twice about jumping into this career field. A lack of diversity, too much competition, long hours and the potential to be surrounded by socially awkward coworkers are some of the negative rumors that are giving you pause about this potential career.

Those bad reputations may be true of some companies, but you can’t take second-hand gossip as truth about the industry as a whole. You need to know what it’s really like to work in tech so you can objectively weigh the good against the bad.

We spoke with tech experts who are dishing out the truth about their experiences working in this exciting field. Take their perspectives into account before you write off the tech field. You might be surprised at these six positive insights into technology careers!

What you should know about working in tech

1. There’s a sense of camaraderie

Tech careers have gained the bad reputation of being a cutthroat, “every man for himself” type of work environment. Maybe that’s true at certain companies, but not all tech careers are that competitive. Sure, like with any business there’s internal competition for recognition and promotions, but that doesn’t mean you and your coworkers will be spending hours scheming against each other. Our experts revealed that there’s actually a strong sense of camaraderie among technology workers.

“I've been surprised and overwhelmed by the sense of community in tech,” says Erica Tafavoti, marketing manager at Planet Argon. “You can really find your tribe, either based on your role, industry or the things you're passionate about.”

The men and women in these workplace communities are more than willing to support one another by offering advice, lending a helping hand and simply being good colleagues and friends.

Forget about the unfair stereotype of aggressively antisocial geeks working alone and ignoring one another—many tech jobs require collaboration and people skills. The camaraderie of the tech world extends beyond friendship and into the very fabric of your work together.

“Most people are [willing] to be introspective and work together to fix issues,” says Jonathan D. Roger, operations director of AndPlus. “The tech field is really refreshing with team accountability and a shared goal of constant improvement.”

Unlike some careers where people are expected to go more-or-less solo, those in the technology field can expect to collaborate and build strong relationships with other team members. If you understand the value of working together toward a common goal, the tech industry could be a great fit.

3. You’re not cut off from senior management

Few things frustrate like a disconnect between employees doing the everyday work and the leadership of an organization. No one wants to feel like a faceless cog in a machine being given commands from on-high—after all, you’re the one whose job is to literally command machines around here.

If you’re worried about being cut off from the decision-makers in the organization, you might be pleasantly surprised to learn that technology workers often interact and collaborate with people from all levels in their organization—including senior management.

Scott Rexroad, founder of LiL-Tec, shares that even early in his career, he had knowledge and information that upper-level executives needed to make smart decisions. “This provided multiple opportunities to be in the room with a group of executives to explain a business problem and give them advice on how to solve it.”

Your tech expertise can put you in the position of a trusted collaborator with the executive team. “These opportunities are much rarer in other departments, such as accounting or logistics, but in IT, they are commonplace,” Rexroad adds.

Some careers don’t give you much room to explore your interests or pursue new learning opportunities, but technology isn’t one of them. In the ever-expanding tech world, curiosity is rewarded and encouraged.

“What surprised me most about coming to work in the tech field was how openly encouraged you are to explore and learn new things,” says Claire Whittaker, tech blogger and product manager at Amazon. “The fast-paced environment where you are constantly looking to innovate on behalf of your customers means those working in tech are continuously exploring new ideas.”

Forget about sticking to the status quo. In technology, your natural drive to learn more and pursue new ideas will serve you well.

5. You get to be creative

Technology may seem cut and dry at first glance, with little wiggle room for creativity. At its heart, though, tech is all about innovation. That means letting your creative side shine as you explore new approaches and ideas.

“Creativity and creative problem-solving in the tech industry can easily rival any artistic endeavors the world may put on,” says Jake Woehlke, writer at Nomad in the Middle. He shares that having a creative attitude will serve you well in the technology field, which is constantly trying to stay ahead in an increasingly global market.

If you love pursuing new ideas and finding the best way to accomplish a goal, your creative mind would be a welcome addition to the tech world.

6. Your work makes a difference

When you think about careers that have a positive impact in the world, jobs like doctors, teachers and firefighters probably come to mind. Technology jobs? Maybe not so much—but that’s where you’re wrong.

“One of the most exciting things about working in technology is the opportunity to have a positive impact on people's lives,” says Andy Vitale, UX director at SunTrust Bank. Your work could include developing a lifesaving medical device or solving a problem that improves the lives of your end users in ways big or small.

If doing work that extends beyond yourself is important to you, a tech career just might have the positive impact you’re looking for. “The more you interact with the people who use your products, the more you realize you have a moral and ethical responsibility to provide them with technology that they can trust,” Vitale adds.

Working in tech: More than meets the eye

There’s far more to working in tech than what you’ll see in media portrayals tells you. Now that you’ve gone beyond the bad press to get the real scoop about what it’s like to work in tech, you might have discovered that the list of positives is longer than you initially thought.

Embarking on a technology career means earning a related degree. Read up on these 8 Signs You’re Wired to Be a Technology Major to find out if a Technology program is right for you.